An outpouring of support was shown at a vigil for 13-year-old Dylan Buensuceso who was killed while riding his bike home from school in Goodyear.

GOODYEAR, Ariz. - A suspect has been arrested after a boy on a bike was struck and killed in a Goodyear hit-and-run on the afternoon of Tuesday, April 26, police said.

"Please join us in keeping this child's family, friends & community in our thoughts and prayers," police said.

"This evening a search warrant was served on a home in the neighborhood in which the fatal hit-and-run occurred," police said in a statement. "Investigators took a male suspect into custody without incident."

"Many people came forward with camera footage. Ultimately, that was key in solving this case," said Lisa Berry with the Goodyear Police Department.

Romo served four months in prison for aggravated DUI, and has a history of DUI and drug-related charges.

The crash, according to officials, happened on April 26, and took the life of 13-year-old Dylan Buensuceso. FOX 10'a Nicole Garcia reports. 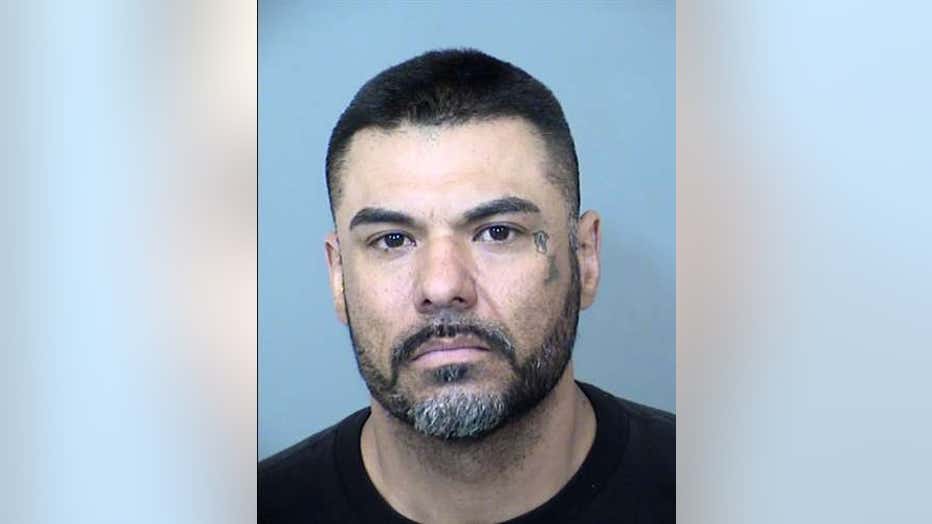 "Unbelievable. He did it, and just went on like nothing every happened," said Dylan's father, Eric Buensuceso. "The lack of remorse the lack of passion, of just being a human being. The report said he got out of his car looked at my son’s dead body and moved on. What’s even more astounding: his parents hid him."

During Romo's initial appearance, prosecutors argued for a cash-only bond. A judge has set a $1 million bond for Romo.

‘I’m just going to miss him’

"He was a caring kid. A great sense of humor. He would’ve been one of the good ones," said Buensuceso.

He says Dylan always rode his bike to and home from school, but on April 26, he says he got a call from the school principal and rushed to the hospital, but it was too late.

"Went to Abrazo and the trauma surgeons said he was gone," Buensuceso said.

Throughout the day, dozens of people dropped off notes, stuffed animals, and candles at a makeshift memorial. Families were gathering to remember Dylan.

"He was very smart. He was more aware than your average 13-year-old. He had aspirations of being a medical doctor. I’m just going to miss him," Buensuceso said. "I'm hoping to God they find him and this can come to a conclusion so we can all grieve."

Buensuceso says he's trying to make sense of this.

"It’s the worst thing in the world for a parent to bury his child. Its one of the worst things you can experience as a parent and now I have to go through this and I really don’t know how to cope at this point. Just trying to struggle to wrap my head around it that he’s gone. We are going to have to carry on without him," the father said.

Dylan's funeral is scheduled for May 14.

Estrella Mountain Elementary School Principal Lynzee Booras released a statement to parents via email saying, in part, "Dear Estrella Mountain Families, After school was dismissed today, an eighth grade student who was walking home was hit by a vehicle. That student was seriously injured and is currently being treated in the hospital. Goodyear Police are handling the investigation of this incident. The safety of our students and staff is always our number one priority and we appreciate our community’s concern. All children react differently to a situation such as this."

Booras offered advice for parents when talking to their children about this incident, and said there will be counselors on campus the following day to speak with.

Dylan Buensuceso died after being struck by a hit-and-run driver on April 26 in Goodyear, Arizona. Photos courtesy of Eric Buensuceso

"Dylan’s family has asked for privacy at this time. I know you join me in expressing our sympathy, concern and prayers. Students react in different ways to tragedies such as this. As the adult caretakers, parents and guardians should expect, try to understand, and accept a variety of emotions and behaviors. The most important thing we can do is to be supportive, to encourage discussion, and to be good listeners," Booras said.

Eri Gomez’s house backs up to San Gabriel Drive, the exact intersection where the child was hit. He says a neighbor ran out to help.

"She was a nurse for, I think Banner, and just started doing CPR immediately and from what I understand, I don’t know his condition at the moment, but I do know that it didn’t look very good," Gomez said before ultimately learning the child passed away.

Gomez says police came to his home asking if his security cameras caught anything, but unfortunately they didn't.

Residents say speeding drivers have long been a concern along the roads Dylan was struck.

"There’s so many people coming and going here. That stop sign, people blow that stop sign. People speed through there, and the construction workers, they don’t know us here," said Marie Trujillo, a parent in the neighborhood.

A GoFundMe has been set up to help the family during their time of need.