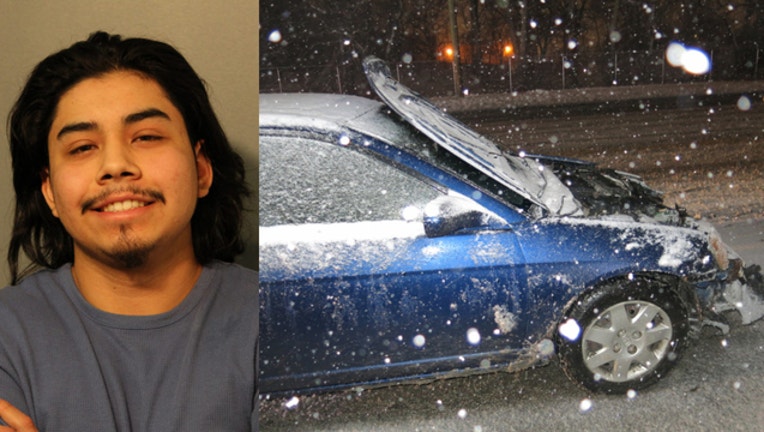 Marley Aleman and the 2002 Honda that he was allegedly driving. | Riverside police

Marley Aleman, 24, was charged with drunk driving, transporting open containers of alcohol, improper operation of a motor vehicle and driving off the road, according to a statement from Riverside police chief Tom Weitzel.

The charges come after a snowplow driver spotted his 2002 Honda passenger car with its front windshield completely obstructed by an open hood at 3:11 a.m. Saturday near Forest Avenue and Kimbark Road, police said.

The snowplow driver, who was clearing the roads during the weekend’s winter storm, noted the Honda was bouncing off the curbs, police said. The Honda was still swerving around when an officer arrived and noticed it also drive off the road with a heavily damaged front bumper.

The officer pulled Aleman over at First Avenue and 31st Street, police said. When ordered to step out of the vehicle, he fell to the ground.

Aleman then got “verbally combative” with the officer and was arrested after failing a roadside sobriety test, police said. It took until 10 a.m. to book him because of how drunk he was.

“This is one of the most egregious drunk driving arrests our agency has ever made,” Weitzel said in the statement. “The fact that he continued to drive with the hood up just demonstrates the clear severe impairment that Mr. Aleman was under.”

Though the Honda’s front end was notably damaged, there weren’t any hit-and-run reports in the area, police said. Officers are investigating how the vehicle became dinged.