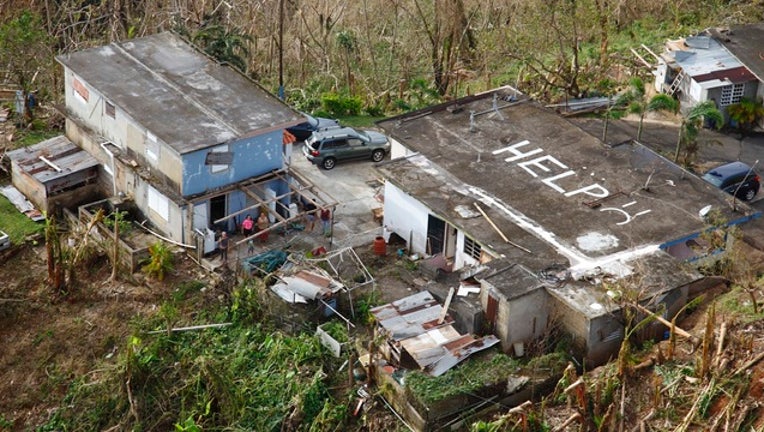 While conducting search and rescue in the mountains of Puerto Rico a CBP Air and Marine Operations Black Hawk located this home a half mile from its peek with HELP painted it is roof. U.S. Customs and Border Protection photo by Kris Grogan

WASHINGTON (AP) - President Donald Trump has refused to meet privately with Puerto Rican Gov. Ricardo Rossello, the governor said Friday, as he condemned the Trump administration for not providing more disaster relief in the 17 months since Hurricane Maria devastated the U.S. territory and left thousands dead.

The Democratic governor, who has been reluctant to lash out at the Trump administration at times, said the Republican president himself bears responsibility for the slow pace of disaster relief.

"Eventually the buck has to stop somewhere," Rossello said Friday on the opening day of the National Governors Association meeting in Washington. "It has to stop with the president."

While the governor's team has been in regular contact with federal officials, Rossello said he made public and private requests in recent weeks to meet with the president. The White House denied the requests without giving a reason, he said. An aide later noted that Rossello met with Ben Carson, secretary of the Department of Housing and Urban Development.

Rossello said he hoped to address Puerto Rico's challenges with Trump during a White House meeting with dozens of governors on Monday.

"There is no movement," Rossello said. "We really need action right now."

He compared the pace of recovery with the effort after Hurricane Katrina, which devastated the Gulf Coast in 2005: Seventeen months after Katrina, federal officials had produced more than 10,000 "project worksheets," while 17 months after Maria, just 60 have been produced, he said. The form describes the work necessary to restore a facility that was damaged or destroyed.

The September 2017 storm caused an estimated $100 billion in damage and left an estimated 3,000 people dead. Trump has denied the estimated death toll, suggesting the number was made up to make him look bad.

Some Puerto Rican Trump critics have suggested bigotry as a factor behind the Trump administration's lack of attention to the Caribbean Island, where Spanish is most residents' first language.

Rossello would not say one way or another whether he suspected racism.

"I would hope that in this time in the United States, the greatest nation on the planet, that was made great because of immigrants and diversity, that that wouldn't be the prevailing thought," he said when asked whether he feared Trump was motivated by racism. "That would be my hope, because if it is, it's a scary prospect not only for Puerto Rico but for everyone."