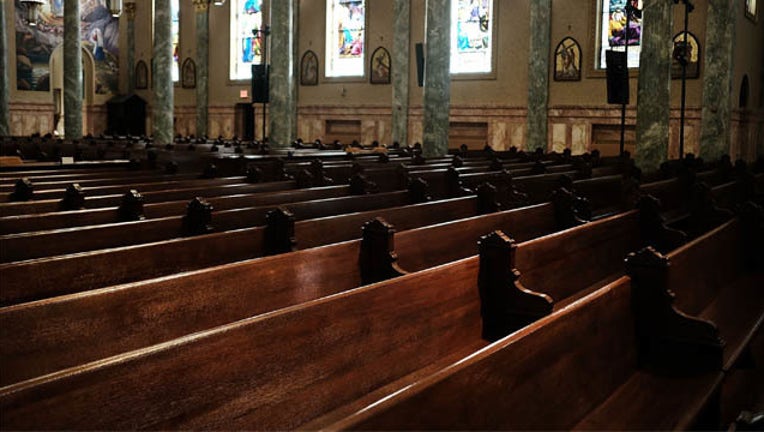 Empty pews stand in a Catholic church in Brooklyn on September 19, 2018. Four men who were sexually assaulted as children by a teacher at a Roman Catholic church have reached a $27.5M settlement with the Diocese of Brooklyn. (Spencer Platt/Getty)

Six women in the Austin area are suing the Catholic Diocese of Austin, the bishop and one priest for sexual abuse they said was swept under the rug.

The victims said they reported sexual abuse by Reverend Isidore Ndagizimana, also known as Father Izzy, at the St. Thomas More Church to the diocese, but instead of firing the priest, he was moved to another parish.

According to the lawsuit, Father Izzy had a history of sexual abuse at churches before moving to St. Thomas More in 2012. “They're mothers, they're wives, they're just ordinary people who were preyed upon by somebody the church knew to be a predator,” said Breen.

Some of the claims listed in the lawsuit filed in district court Wednesday, include unwanted kissing, touching, hugging and groping on church property, most commonly in the confessional.

“Abuse of this kind, by somebody in a place of special trust, by somebody who is a vessel of God and God's love in your faith, is very damaging,” Breen said.

Defendants also include the Catholic Diocese of Austin and the bishop there.

Victims claim they reported the sexual abuse to those parties and were told to let the church handle it. “A big part of the problem in this case, which is a common problem we've been seeing with the Catholic Church, is instead of fixing the problem, instead of having a filter and preventing another attack, the abuser is moved to a new parish, the abuse is swept under the rug and a new set of victims are swept into the cycle,” said Breen.

According to the Catholic Diocese of Austin, Father Izzy resigned as pastor of the St. Thomas More church in 2017 and was placed on leave. He returned from leave in July of this year and was assigned to the St. Mary parish in Brenham.

The diocese said Father Izzy took another leave in August and remains on leave at this time.

The lawsuit claims all six victims still suffer emotional trauma from the abuse.

According to Breen, the women took matters to court after realizing the church may not act on it. “My clients are saying, ‘Enough is enough. If this leadership isn't going to fix the problem, then we need new leadership in the Catholic Church,’” said Breen.

Breen said the women are afraid that there are additional victims that have not come forward.

They encourage anyone else who has been assaulted to get help.