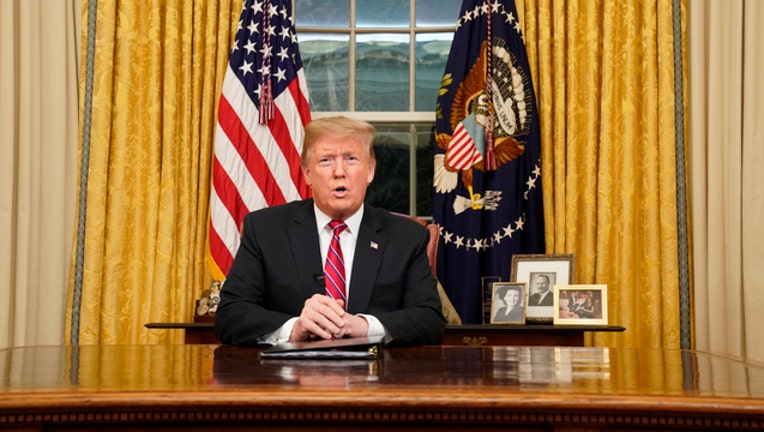 President Donald Trump speaks to the nation in his first-prime address from the Oval Office of the White House. (Photo by Carlos Barria-Pool/Getty Images)

WASHINGTON (AP) -- In his prime-time speech to the nation, President Donald Trump rested part of his case for a border wall on the need to stem the flow of drugs from Mexico, ignoring the reality of how most illicit drugs come in: stuffed in vehicles at official border crossings. No wall would stop that practice.

TRUMP: "Our southern border is a pipeline for vast quantities of illegal drugs, including meth, heroin, cocaine and fentanyl. Every week, 300 of our citizens are killed by heroin alone, 90 percent of which floods across from our southern border." - from the Oval Office on Tuesday night.

THE FACTS: A wall can't do much about that when drug trafficking is concentrated at land ports of entry, not remote stretches of the border.

The Drug Enforcement Administration says "only a small percentage" of heroin seized by U.S. authorities comes across on territory between ports of entry. The same is true of drugs generally.

In a November report, the agency said the most common trafficking technique by transnational criminal organizations is to hide drugs in passenger vehicles or tractor-trailers as they drive into the U.S. though entry ports, where they are stopped and subject to inspection. They also employ buses, cargo trains and tunnels, the report says, citing other smuggling methods that also would not be choked off by a border wall.

Trump recently denied that traffickers use entry ports at the southern border, contradicting the evidence and assertions of his drug enforcement personnel.