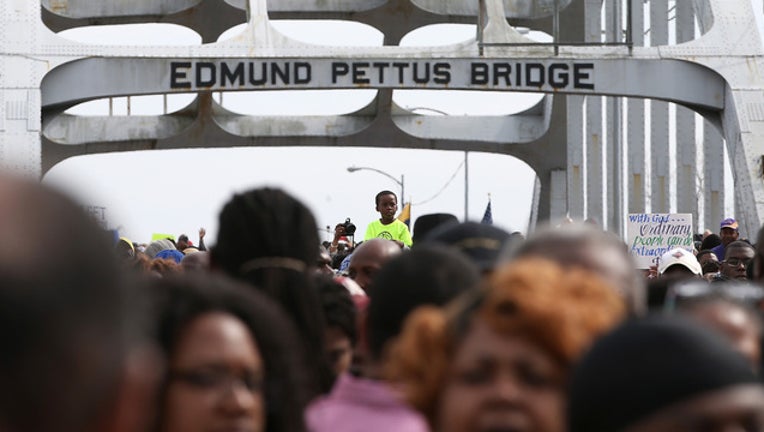 A young boy rides on the shoulders of a parent as thousands of people walk across the Edmund Pettus Bridge during the 50th anniversary of the Selma to Montgomery civil rights march on March 8, 2015. (Photo by Justin Sullivan/Getty Images)

SELMA, Ala. (AP) - Several members of Congress have joined civil rights activists and others for the annual commemoration of a day of racial violence in Selma dating to 1965.

A bipartisan group including Rep. John Lewis of Georgia led the crossing of the Edmund Pettus Bridge on Sunday afternoon. It was to recall "Bloody Sunday," when voting rights protesters were attacked by police as they attempted to cross the bridge.

Lewis, then a young organizer, was among those injured then. That violence set the stage for the Selma-to-Montgomery march, which helped build support for congressional approval of the Voting Rights Act months later.

The annual celebration drew tens of thousands of people in 2015, when then-President Barack Obama spoke near the base of the bridge as former President George W. Bush listened.