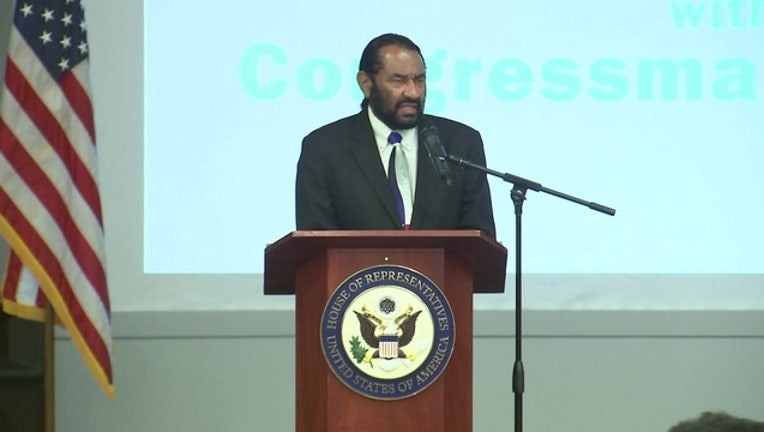 WASHINGTON (AP) — “It’s not about any one person, it’s really about the concept of ‘government of the people, by the people, for the people’ and the notion that we have a Democracy," responded U.S. Rep. Al Green when asked by FOX News host Neil Cavuto why he would force an impeachment vote against President Donald Trump. "And within this democracy, our Constitution accords this right to bring impeachment to the floor for every member of our caucus.”

Democrats are largely lining up behind House Speaker Nancy Pelosi and her wait-and-see strategy on any impeachment proceedings against President Donald Trump.

"Bigotry is impeachable,” added Rep. Green in his interview with Cavuto on Tuesday. On the first day of the new Congress in 2019, Green and Rep. Brad Sherman introduced articles of impeachment against the president. The two Congressmen also tried to impeach the President in 2017 and 2018.

Moderate and even some of the most liberal House Democrats said they were supportive of the speaker after she told The Washington Post that she's not for impeachment, at least for now. Impeaching Trump is "just not worth it," Pelosi said, unless there's overwhelming support. While some in her caucus may disagree on certain points, the majority of Democrats endorsed Pelosi's approach.

House Intelligence Committee Chairman Adam Schiff said a unilateral pursuit of impeachment by Democrats would be an "exercise doomed for failure."

"I see little to be gained by putting the country through that kind of wrenching experience," he said at a breakfast hosted by the Christian Science Monitor.

House Oversight and Reform Committee Chairman Elijah Cummings said impeachment "has to be a bipartisan effort, and right now it's not there." Cummings said his sense is that "this matter will only be resolved at the polls."

Even one of the strongest proponents of impeachment, freshman Rep. Rashida Tlaib of Michigan, said Tuesday that she is "absolutely not" disappointed in Pelosi. Tlaib, who attracted attention the day she was sworn in by using a vulgarity in calling for Trump's removal, said the speaker has always encouraged her to represent her liberal Detroit district.

Tlaib stressed that she is going to continue to push for impeachment, but echoed Democratic leaders' caution in first calling for a committee process that investigates Trump.

"That doesn't mean we are voting on it, it means we are beginning the process to look at some of these alleged claims," Tlaib said.

Democrats have launched multiple probes into Trump's White House and personal businesses. Those investigations, led by Schiff and other House committee chairmen, are intended to keep the focus on Trump's business dealings and relationship with Russia, no matter what comes from the investigation of special counsel Robert Mueller.

Rep. Pramila Jayapal, D-Wash., a member of the House Judiciary Committee and a leader of the Congressional Progressive Caucus, said Pelosi's comments are "probably a reaction to everybody wanting to go to the end of an investigation when we haven't started."

Pelosi's approach could also provide cover to some of her members, including freshmen who were elected in November from "red-to-blue" districts where impeachment is politically fraught. California Rep. Katie Hill, one of those freshmen, praised Pelosi's approach.

"If it's going to be a political disaster for us, then we're not going to do it," she said.

House Majority Leader Steny Hoyer, D-Md., noted that the majority of freshman members have not been outspoken on impeachment, and that the Senate remains controlled by Republicans. "Nobody thinks there is going to be a conviction in the Senate, unless circumstances very substantially change."

Pelosi has long resisted impeachment as a drastic step that should only be broached with "great care."

She rebuffed calls when she first held the speaker's gavel, in 2007, to start impeachment proceedings against George W. Bush. Having been a member of Congress during President Bill Clinton's impeachment, she saw the way the public turned on Republicans and helped Clinton win a second term.

Last year, heading into the midterm elections, Pelosi discouraged candidates from talking up impeachment, preferring to stick to the kitchen table issues that she believes most resonate with voters. The approach paid off, as Democrats won back the House majority for the first time in eight years.

In a caucus meeting Tuesday morning, Pelosi encouraged Democrats to "keep our eye on the prize" as "we look at what this president is doing to this great country." Impeachment was not discussed, according to an aide who requested anonymity to discuss the closed meeting.

"We're working very hard to deliver on those things, and I think the speaker wants to make sure we stay focused on that," he said.