Crews tried to chase down the "Rally Goose" during the Los Angeles Dodgers' NLDS showdown against the San Diego Padres.

LOS ANGELES - The Los Angeles Dodgers could not take advantage of the team's three homers and the "Rally Goose" against the San Diego Padres in Game 2 of the National League Division Series.

The Boys in Blue's loss comes despite the fact that they went back-and-forth against the Padres offensively – with the Dodgers answering shortly after the first two San Diego runs.

The Padres drew first blood after a solo homer by ex-Dodger Manny Machado to give San Diego a 1-0 lead at the top of the first inning. The Dodgers answered in the following frame via a Freddie Freeman solo home run to tie the game at 1-1 to end the inning.

The Dodgers had a brief lead in the second after a solo homer from infielder Max Muncy. Machado once again got in LA's way by hitting a double at the top of the third inning, driving in a run and tying the game at 2-2. In the same inning, Padres' Jake Cronenworth cashed in an RBI via a fielder's choice to give San Diego a 3-2 lead – only to have the lead get canceled by a Trea Turner solo homer to end the third.

At the top of the sixth, Jurickson Profar's RBI single off Brusdar Graterol put the Padres up for good. Two innings later, Jake Cromenworth's solo homer off Dodgers' Blake Treinen gave San Diego an insurance run and a 5-3 lead, which ultimately was the final score.

While far from disastrous, Dodgers' Clayton Kershaw didn't really live up to his future-first-ballot hall-of-fame standards in Game 2. The longtime Dodger ace finished Wednesday's game with five innings, and allowed six runs, three runs – all earned, with six strikeouts. Graterol was dealt with the loss Wednesday.

At one point during Wednesday's game, a goose lying on the field at Dodger Stadium stole the show.

In the bottom of the eighth inning, the sitting animal prompted *checks notes* a "goose delay," drawing ironic cheers from the fans in the stands. The stadium's crew members were able to eventually capture the goose and allow the game to resume.

Following the goose's capture, the Dodgers had a mini-rally in the same inning with Gavin Lux hitting a single, and then Trayce Thompson drawing a walk. The brief surge, however, yielded no runs after Austin Barnes flied out to center field to end the eighth inning.

The goose's brief time in the spotlight prompted the Detroit Tigers to chime in: 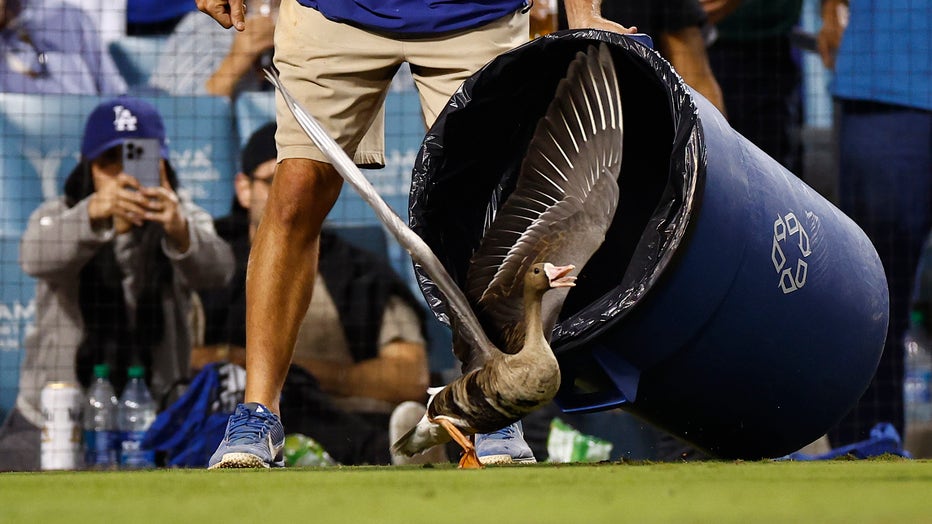 A goose flies on the field during the eighth inning of game two of the NLDS between the Dodgers and San Diego Padres at Dodger Stadium on October 12, 2022. (Photo by Ronald Martinez/Getty Images)