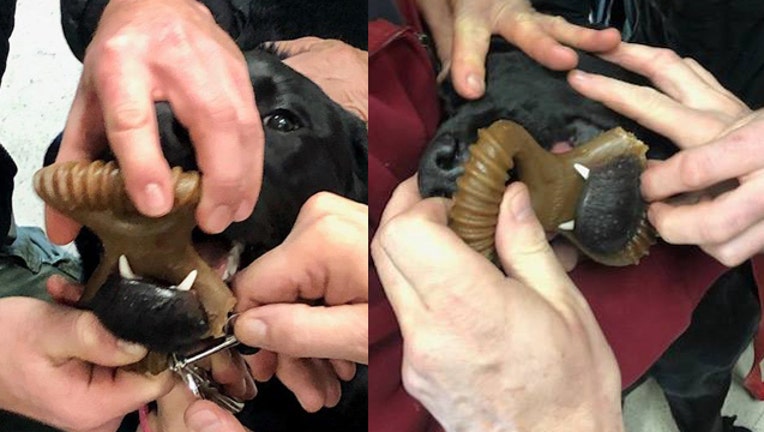 "An unexpected canine emergency presented itself this evening at the WFD." (Wrentham Fire Department)

WRENTHAM, Massachusetts (FOX 7 Austin) - Firefighters in Massachusetts are warning pet owners to be careful with the toys they give their dogs after responding to a canine emergency where a chew toy became lodged in a hound's mouth.

According to the Wrentham Fire Department, a local resident came to the fire station asking for help with her dog on Sunday, January 27. The dog had a Benebone chew toy stuck on her lower jaw.

"Seems simple enough for us, but it was a very unusual situation. The dog thankfully did not have a compromised airway and seemed to be in good spirits but it was obvious that the pup was distressed as the object was lodged on her lower jaw," the fire department shared in a Facebook post.

Firefighters used multiple tools to attempt to remove the chew toy from the dog's jaw, including a hydraulic cutter, but were unsuccessful. They recommended that the pet owner bring her dog to the Tufts Vet Emergency in Walpole.

The vetinary staff was able to sedate the dog and cut it off with a cast cutter, according to the Wrentham Fire Department. The dog is uninjured and home resting now with her grateful owners.

FOX 7 Austin reported on this story from Austin, Texas.

Importance of socializing your dog

Charity rescues dogs and other animals from Mexico, brings them to Texas