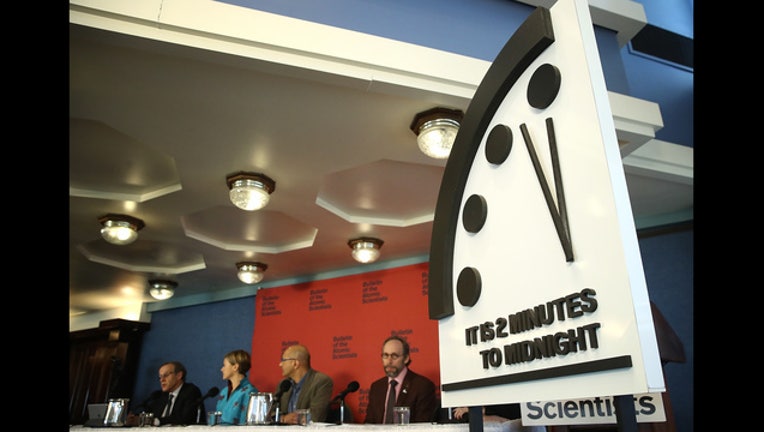 The Bulletin of the Atomic Scientists unveil the 2018 "Doomsday Clock" January 25, 2018. (Photo by Win McNamee/Getty Images)

(FOX NEWS) - The Doomsday Clock was moved on Thursday to two minutes to midnight – marking the closest the symbolic point of global Armageddon that the clock represents has reached since 1953.

Citing President Trump’s proactive rhetoric toward fellow global powers, North Korea’s continuing nuclear weapon and ballistic missile tests and heightened tensions between the U.S. and Russia, members of the Bulletin of the Atomic Scientists said that the world is the closest it has ever been to nuclear annihilation.

“To call the nuclear situation in the world dire is an understatement,” Rachel Bronson, the president of the Bulletin of the Atomic Scientists said at a press conference Thursday in Washington D.C. “It is now two minutes to midnight—the closest the Clock has ever been to Doomsday, and as close as it was in 1953, at the height of the Cold War.”

The Doomsday Clock, which was first introduced in 1947 to represent the threat of a global nuclear war, has in recent years begun to also include climate change, emerging biotechnologies, and cybertechnology that could irrevocably harm life on this planet. The clock was farthest from midnight in 1991, when it was moved back to 17 minutes after the U.S. and Soviet Union signed the first Strategic Arms Reduction Treaty.

For more on this story, visit FoxNews.com