PHILADELPHIA - A day after Philadelphia told homeless encampment members to disband two tent communities, both encampments are still standing and residents have prepared for whatever may come next.

The outer lanes heading westbound on the Benjamin Franklin Parkway have been blocked by several wooden and steel barricades. The inner lanes, however, are open to traffic.

FOX 29's Steve Keeley reports that encampment members overnight dragged fencing and steel barricades from blocks away to fortify a perimeter around the encampment. Some fencing was taken from a construction project on Vine Street and 22nd Street, Keeley says. 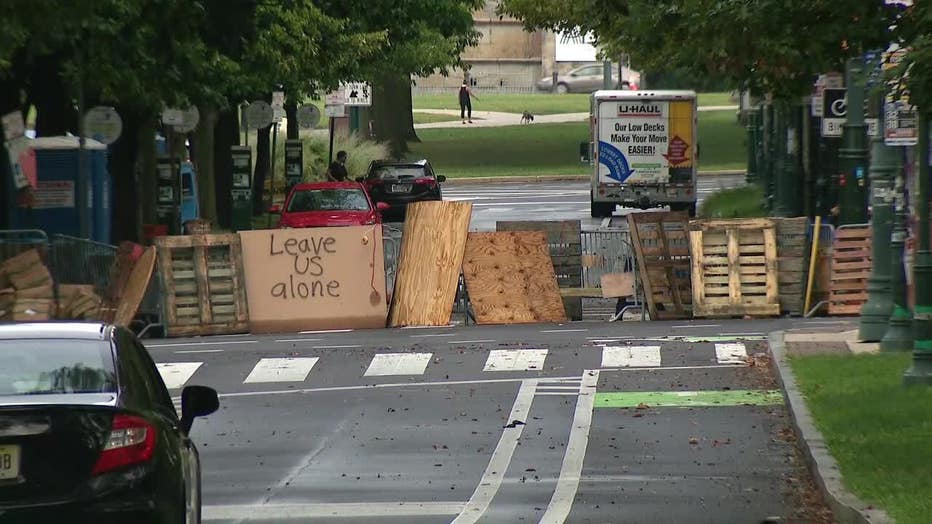 The mayor now says removing the encampments on Ridge and the sprawling homeless-protest camp on the Ben Franklin Parkway will take time.

"The resolution of the protest camps which began yesterday is continuing today. This is going to be a multi-day operation," Mayor Kenney said.

Last week, the city posted a formal notice for the third time, requiring the encampments on the Benjamin Franklin Parkway and Ridge Avenue to close by 9 a.m. Wednesday.

Philadelphia police were on the scene early Wednesday morning, closing surrounding roadways before organizers held a press conference to have their voices and their message heard.

Businesses around the Parkway also took precautions ahead of the deadline, including Whole Foods Market who boarded up their windows.

Several members of local clergy arrived at the homeless encampment around 7:30 a.m. to try and bring a peaceful resolution to the standoff, but they were not permitted inside the encampment to hold those discussions.

“Let’s be clear: No one should be living on the street. The problems caused by lack of affordable housing in the city are very real and very tragic. This morning you saw that outreach workers and clergy were trying to help and they were prevented from doing so,” Kenney said.

Kenney said the city is not relenting in its efforts to end the homeless encampment in an amicable manner. While the Wednesday morning deadline for encampment members to vacate the areas has come and gone with no resolution, Deputy Managing Director Eva Gladstein says over 130 people have accepted housing and services. Wednesday morning, outreach representative helped eight people find a place to stay and offered one person employment assistance. 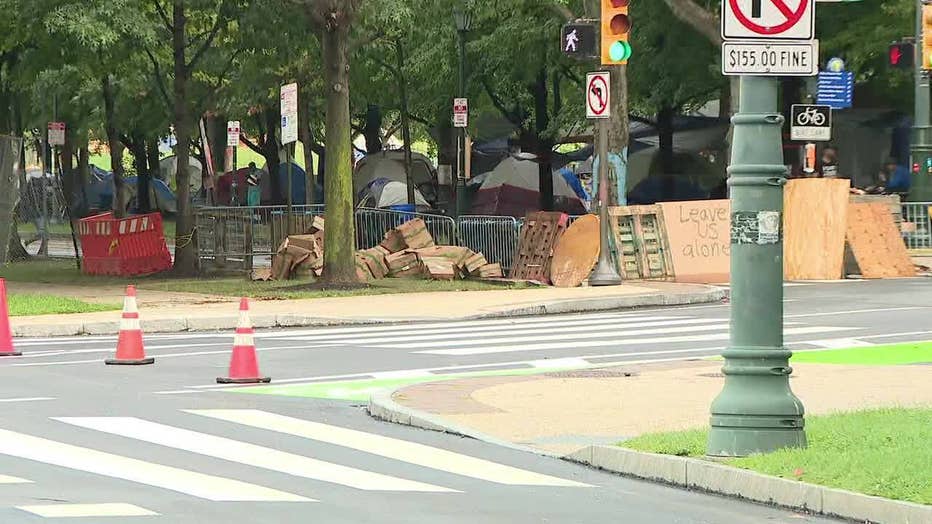 “We did get some folks taking up services today, but unfortunately we were rebuffed, we were not able to enter the camps, so we do not know if there are other homeless individuals who are residing there who do care to get connected to services,” Gladstein said.

The city is coming up with innovative ways to help homeless individuals get the housing they need, according to Gladstein. The city has seen 25 people apply for its new rapid rehousing program, with two people already placed in apartments. The Philadelphia Housing Authority is also making properties available through a registration process in an effort to create new and permanent living accommodations.

The Parkway encampment has stood on a baseball field since June 10 and has grown to an estimated 100 to 150 people.

The city and encampment representatives have spent three months negotiating a long-range housing plan for the homeless from shelters to a tiny home village and a rapid rehousing program.

City officials say one of the demands requires immediate permanent housing for everyone at the encampment, though encampment leaders have not identified the number of people within the encampment, or how many are indeed homeless.

According to Kenney, the city has received more than 400 complaints about the encampment and claimed living conditions there have worsened over the weeks.