A Florida woman says a stubborn iguana is to blame for the mess in her home, and her TikTok video documenting the 'crime scene' now has millions of views.

SUNRISE, Fla. - A South Florida woman came home to find her house had been broken into and her room had been trashed. She soon realized that an iguana had invaded her home.

Kelly walked into her home in Sunrise, near Fort Lauderdale, and noticed that her sliding glass door was open. That isn't unusual, she says, since her three dogs actually know how to open it so they can go outside.

"I thought the dogs had just opened the door ’cause they’ll open it up if it’s unlocked, and I didn’t think anything of it," Kelly told WSVN. "I closed the door and sat down to watch TV, and I heard all this noise coming from the other room that just didn’t stop."

She walked into the room to find it in disarray, with her belongings toppled over and scattered on the floor. That's when she noticed the bright green, 4-foot-long iguana hiding behind her dresser.

Kelly immediately called her father and asked him to come over and retrieve the reptile. 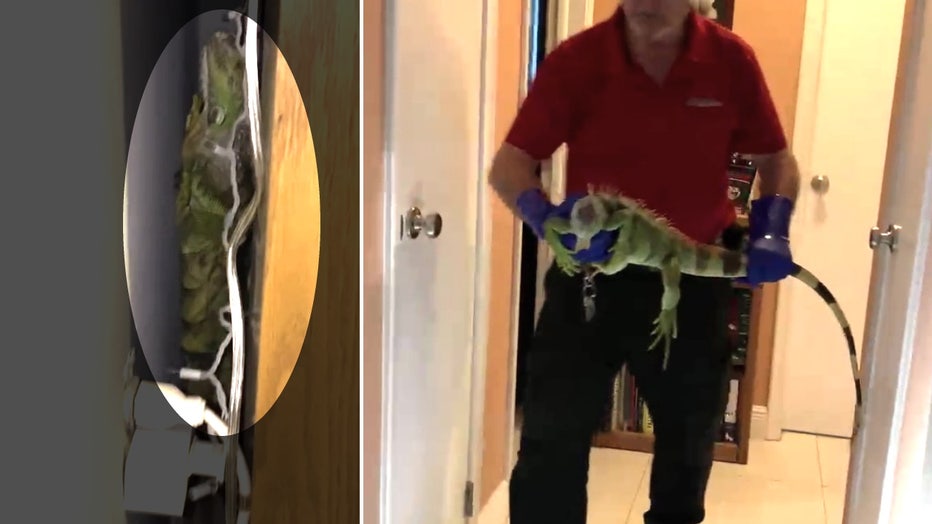 Her dad soon arrived and managed to capture the iguana.

"He just got a pair of gloves on and moved the bureau back and just kind-of grabbed its body and brought it outside, but it was fighting," she told the station. "He had to go slow. He first tried to grab it, and the iguana grabbed on to like the bureau, and its nails were like caught."

Kelly lives on a canal, and says iguana sightings are common. However, the reptiles haven't come close to her house before since she says they're usually scared off by her dogs.

Kelly's video quickly spread on TikTok, garnering more than two million views. She said she thought only her friends and family would see the video, but didn't expect it to go viral.

"Just crazy that it’s blown up like this," she said. "Two million people have seen this story about this iguana getting into my house. I definitely didn’t expect that at all."