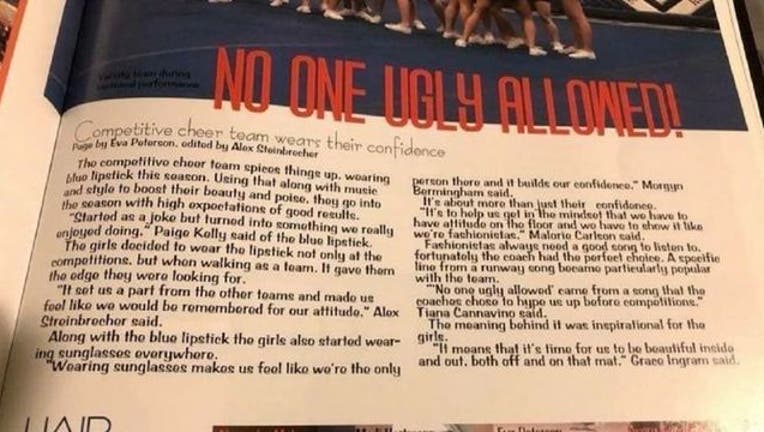 A yearbook headline of 'No one ugly allowed!' prompts the Oswego High School principal to apologize Tuesday. (School District 308 in Illinois)

FOX NEWS - An Illinois high school yearbook that ran a headline “No one ugly allowed!” on its cheerleading team page ignited backlash on social media, prompting the school principal on Tuesday to apologize.

An article in the Oswego High School’s yearbook page described the steps the cheerleading squad took to “convey confidence,” and the headline—written in bright orange and in all caps-- was part of a song the coaches selected to “hype us up” before competitions, The Aurora Beacon-News reported.

One parent of a former student told the paper that she is “shocked, ashamed and embarrassed.”

“No matter the context, the title is negative, irresponsible and thoughtless,” the parent said.

Social media comments called the headline “disgusting” and a bad message to girls, The Beacon-News reported.

Mike Wayne, the school’s principal, apologized in a statement.