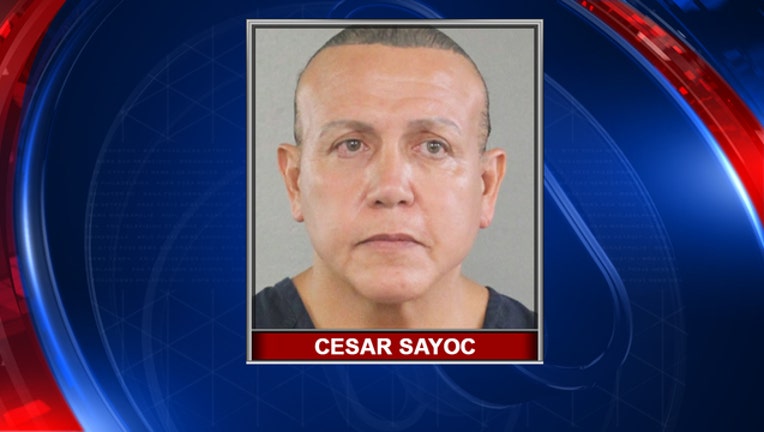 NEW YORK (AP) - A Florida man who mailed crudely made pipe bombs to prominent critics of President Donald Trump said he abused steroids for over 40 years, an issue his lawyers say they'll cite at sentencing.

Cesar Sayoc made the assertion in lengthy and rambling letters to a federal judge that were posted in his court case file Tuesday.

Sayoc, 57, pleaded guilty to explosives-related charges in March and faces a mandatory 10-year prison term and up to life in prison when he's sentenced Aug. 5. His lawyers told the judge in a different letter that a psychiatrist with specialized knowledge of the effects steroids can have on mental health will compose a report on Sayoc's extensive steroid use prior to that sentencing date.

The bombs were mailed to addresses in New York, New Jersey, Delaware, California, Atlanta and Washington, D.C., and began turning up over a five-day stretch weeks before the 2018 midterm elections.

No bombs exploded, which Sayoc said was by design, describing the devices as little more than fireworks. Prosecutors plan to submit a detailed report on the explosives prior to sentencing.

In his letters, Sayoc told U.S. District Judge Jed S. Rakoff that he had abused steroids for more than four decades and was using 274 different supplements and vitamins along with "heavy amounts of steroids" before his arrest.

He wrote that before he mailed explosives, his idea "first was how to tone down the liberal left violence platform." He wrote that he believed prominent Democrats were encouraging violence, saying he had been attacked personally - including as he returned to his hotel after attending Trump's inauguration.

Sayoc also asserted "leftist leadership" had encouraged followers to commit violence that caused $1,800 worth of damage to his van, including slashed tires, sliced fuel lines, broken windows and doors and damage to his battery that a mechanic told him could have caused it to explode.

Sayoc has been held without bail since his arrest in late October outside a South Florida auto parts store. He had been living in his van, which was plastered with Trump stickers and images of crosshairs superimposed over the faces of Trump opponents.

Since being imprisoned, Sayoc said, he has heard voices and suffered various psychological effects, including depression, high anxiety, vertigo and loneliness.

Explaining his crimes, he said he was never political until he was looking at Facebook on his phone one day when "Donald J. Trump popped up ..."

He likened attending a Trump rally to a newfound drug.

"I was getting so wrapped up in this new found fun drug," he said in one handwritten letter.

Now, though, he says he has sworn off politics.

"Politics is dirty, ruthless, deadly," he wrote. "It is a poison. It will drive you crazy like it or not."