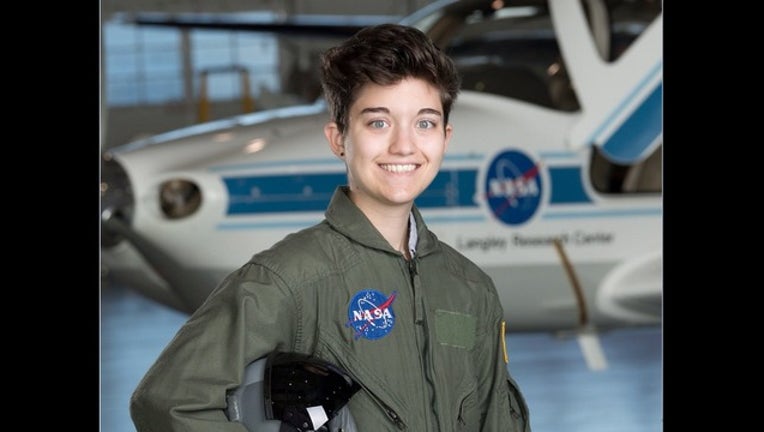 V. Wegman wrote a tweet in response to the SCOTUS decision to ban transgender persons from serving in the military. V identifies as non-binary themself and says the Trump administration is "manufacturing oppression" to distract from real issues.

OAKLAND, Calif. (KTVU) - This week the Supreme Court narrowly sided with the Trump administration on their plans to restrict transgender men and women from serving in the U.S. military.

The vote was 5-4 on Tuesday, allowing the orders to go into effect immediately while court challenges continue.

Not everyone agrees this is the right decision. For V. Wegman, a non-binary communications student at Ohio State University who interned at NASA, they found community and support after voicing their take in a clear and succinct way on Twitter.

Wegman, who doesn't mind using their full name, "Victoria," spoke out on Twitter and the tweet went viral.

"I'm a nonbinary NASA intern. Nothing about my identity makes me any less capable of working in the government. This administration is manufacturing oppression as a distraction from real issues. #TransMilitaryBan PS my coworkers and I are getting pretty despearate #shutdown." they wrote.

Those few words on the micro-blogging site have been re-tweeted 7.5 thousand times and has 31,000 'likes' as of January 24.

"I'm shocked by this level of response, and overwhelmed with joy by the number of people who have found hope and happiness just by seeing non-binary people (Wegman also refers to non-binary as "enby" in their response to us by email) at NASA. It's also terrifying because I feel exposed and susceptible to criticism, more than ever, by being accidentally in the spotlight for something so personal."

And the reaction was overwhelmingly positive. Wegman said they have been a proud and happy "enby" for three years.

"Working at NASA is a dream." Wegman calls it a "lifelong goal" and was lucky enough to go twice. They used a university grant for an unpaid internship at NASA HQ History Office in summer 2017.

"I was there when the trans ban was first suggested by the president on Twitter," they said.

Wegman took a paid position at NASA Langley Research Center last fall. "At both centers, everyone was kind and accepting. Many used my preferred pronouns with minimal reminding. NASA has some great LGBTQ organizations such as LEAG (Employee Alliance Group) that build the community and raise awareness of our struggles. I loved working there and I never felt lesser or unusual as a queer person."

But in speaking out, Wegman said they were including not only the LGBTQ+ community, but immigrants as well.

Until a few years ago service members could be discharged from the military for being transgender. That changed in 2016 when the Obama administration began allowing transgender men and women already serving in the military to undergo gender transition if they were diagnosed with gender dysphoria, distress associated with their biological gender.

Before college, Wegman said all they knew about trans and non-binary persons was learned from celebrities like Chaz Bono, Laverne Cox and Caitlyn Jenner. "I knew that I had related to their dysphoria, but I never identified as a man. I had no exposure to a whole community of people with similar experiences to mine. I thought I was a freak."

In their words, to make a long story short, having non-binary and trans people be visible makes a world of difference for everyone.

"Exposure leads to education, which leads to acceptance. If the world can see us in mundane places such as the office, they won't be so concerned to see us in the restrooms, classrooms, etc. We just want to live our lives free of fear," they said.

Wegman graduates in May and is looking for jobs. They hope to return to NASA to work in digital media again, but with the government shutdown stretching well past the 30-day mark, conversations regarding their hiring have come to a halt.

For now, they enjoy the "lovely community" of non-binary and trans people OSU has to offer and feels supported.

Associated Press contributed to this report