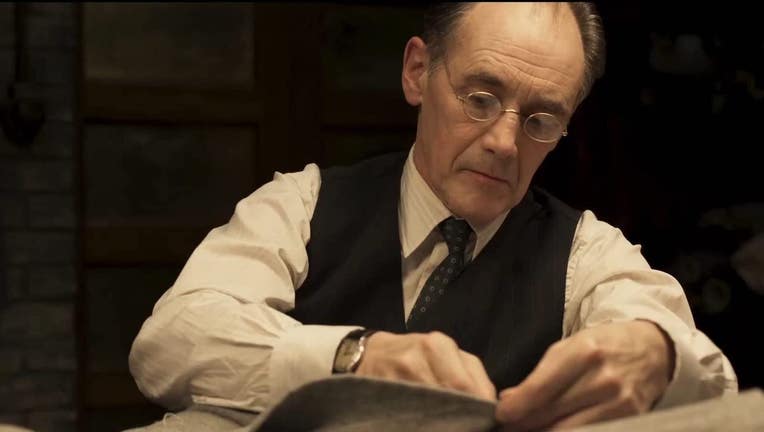 Chicago - In an entertainment industry that rewards big, showy performances from glitzy actors, it’s nice to remember that actors like Mark Rylance still exist. The unassuming, soft-spoken performer, who first won an Academy Award for his movie-star-making turn in Steven Spielberg’s "Bridge of Spies," is often most compelling when he weaponizes that apparent gentility, making it a tool his characters use to mask their motives and capabilities. And it’s that kind of subterfuge that debut director Graham Moore leverages to chilling effect in his claustrophobic Chicago thriller "The Outfit."

About "The Outfit": Cutting away from established patterns 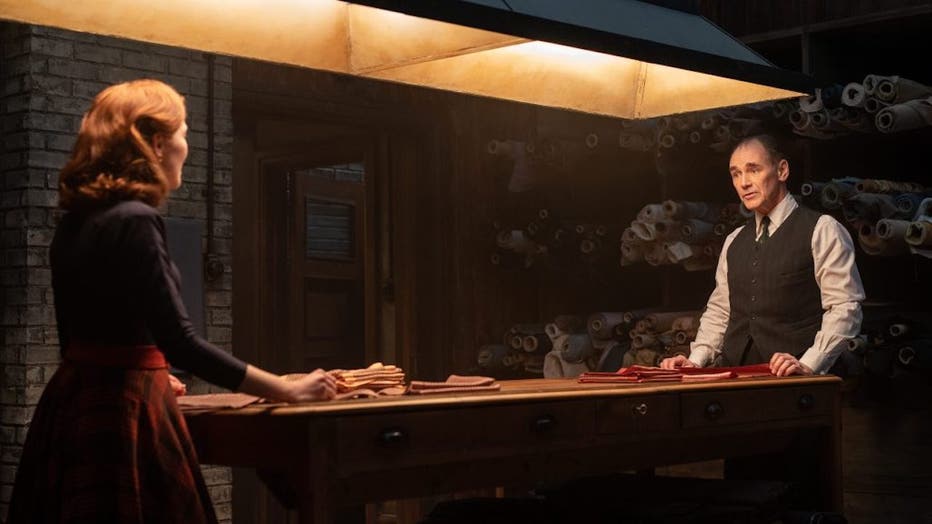 Zoey Deutch and Mark Rylance in "The Outfit" (Focus Features)

Moore, who won an Oscar himself for his screenplay for "The Imitation Game," sets the entirety of "The Outfit" inside a moody bespoke clothing shop in the 1950s. Its owner, English ex-pat Leonard (Rylance), fled to Chicago after the Great War, chased by the memory of a personal tragedy that cost him everything except his shears.

Now he makes a decent living as a tailor — or "cutter," as he modestly clarifies — meticulously creating custom suits for his clientele, which include members of the Boyle mafia (who also use a lockbox in the back for clandestine communications amongst the "family"). Leonard prefers a life of quiet dedication to his work; his only companion is his assistant Mabel (Zoey Deutch), who longs to travel the world and has started a risky fling with Richie Boyle (Dylan O’Brien), son of mob patriarch Rob (Simon Russell Beale).

Things go south late one night when hotheaded Boyle goon Francis (Johnny Flynn of 2020’s "Emma.") carries a wounded Richie into the shop and demands that Leonard "sew him up." (After all, what’s really the difference between stitching fabric and flesh?) But this circumstance is merely the opening salvo in a turf war that involves a rat, a mysterious tape and an even more mercurial organization called — you guessed it — The Outfit, whose boss wants in on the Boyle family’s territory. Leonard, now reluctantly promoted from bystander to participant, must use his wits to survive the night. Luckily for him (and the audience), there’s more to the nebbish wallflower than meets the eye.

See "The Outfit" for: The intricate stitching of its script and performances 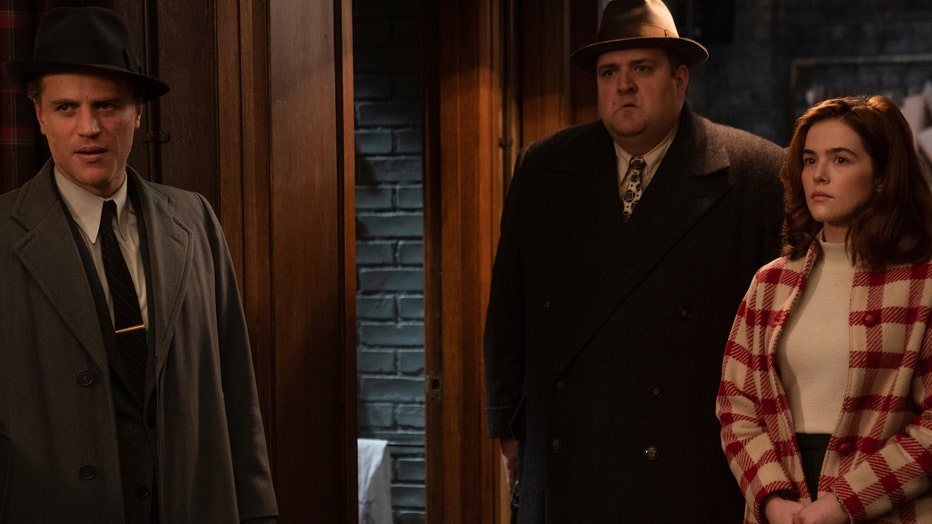 Moore, a Chicagoan himself, has a natural fluency in the wise-guy aesthetics of the city’s mafioso history, and "The Outfit" is chock-a-block with tossed-off vernacular that evokes that world without over-explaining or rendering the finely-constructed screenplay any less taut. You don’t have to own a mobster thesaurus to figure out what Francis means when he says Richie has "a marble in his gut," and Leonard’s matter-of-fact narration over certain stretches of the film feels driven by character more than convenience — offering up thematically-fitting parables whose true nature are deliciously revealed later on.

Mirroring Leonard’s own penchant for precision, Moore’s script is marvelously intricate. "The Outfit" unfurls at a pleasing pace, Moore layering one revelation on top of another and spacing out Hitchcockian twists at pitch-perfect moments. Who’s the rat? Will Boyle find out what’s happened to Richie, and who will he blame when he does? Who will even survive the night? And who is Leonard, really, underneath all that downcast deference? While Moore hardly changes the thriller game with the results, he still knows how to build a pleasing mechanism with the pieces he’s given himself.

The supporting cast is more than game for the guns-and-glory intrigue; the ensemble mostly consists of established British character actors chewing their way through nasal Chi-caah-go accents with devilish glee. That goes double for Flynn, parlaying his unconventional good looks and reedy timbre into a bad-boy capo who proves the film’s true wild card. For his part, Beale puts his pugnaciously interesting visage to good use as a mob boss who employs quiet menace, and Nikki Amuka-Bird steals the spotlight, however briefly, as a rival mobster who’s more than ready to fill the gap Boyle’s weakness presents.

But the movie is Rylance’s show through and through, Moore’s camera holding long on close-ups of his weathered face, the actor’s sad eyes masking the character’s unpredictable wit (and possibly more). From moment to moment, Leonard has to be many things to many people — friend, ally, informant, protector — playing each side against the other just to stay alive, often with a single line of dialogue. It’s a tremendous showcase for one of the world’s most skilled performers, who doesn’t often get to carry a major motion picture so squarely on his back. 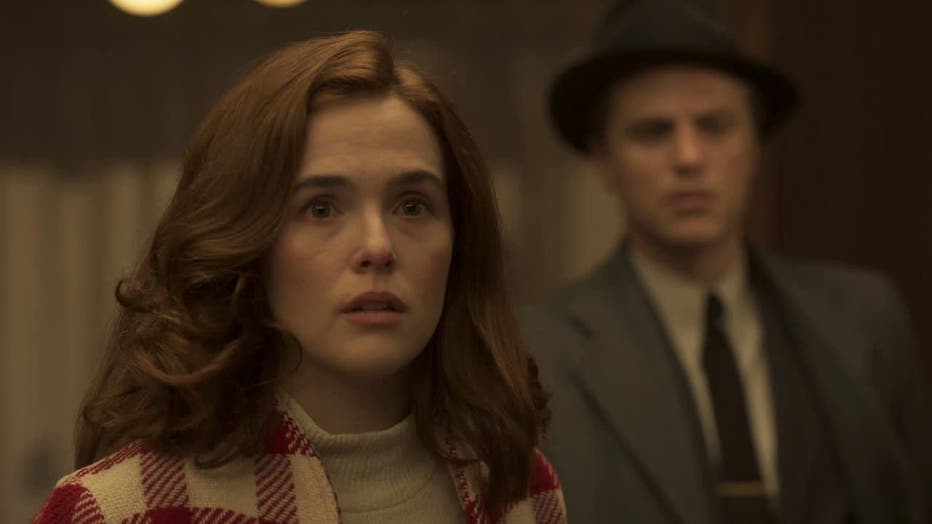 While "The Outfit" can feel a little unambitious at times, chiefly due to the innate staginess of a one-location potboiler like this, it benefits from impressive talent behind the camera as well. There are layers of menace and calculation in every piece of Sophie O’Neill and Zac Posen’s period-appropriate costumes, lit with even-handed detail by cinematographer Dick Pope so we can catch every stitch and fold of Leonard’s process. And Alexandre Desplat’s winking, piano-heavy score twirls with unexpected whimsy (not unlike his underrated score for the Mossad spy thriller "Operation: Finale").

Like Leonard’s precisely-cut suits (the one he wears in the film having been constructed by Rylance himself, who dove into the world of tailoring for the role), "The Outfit" feels like something made with care, patience and attention. Moore wisely stays in his comfort zone in his first outing as a director, sticking to what he knows, which is intricate period detail and an ear for dialogue. And the same theatricality that might hamper other filmmakers allows him to stay focused on the scraps of fabric in front of him, assembling the components into a pleasing whole. Frankly, we should have more films that play like theater, and "The Outfit" is a refreshing reminder that that tradition is alive and well.

And speaking of outfits... stream these for free on Tubi

Carol (2015): This achingly romantic period drama from director Todd Haynes stars Cate Blanchett as the titular Carol, a glamorous woman who catches the eye of Therese (Rooney Mara), a young aspiring photographer working in a department store. Carol forgets her gloves (or does she?) and the sparks that fly across the counter catch fire when introduced to the oxygen of the outside world. Haynes’ unapologetically queer film, heavily inspired by photography of the 1950s, is swoon-worthy and stylish. Mara and Blanchett are almost as good at wearing incredible costumes as they are at acting, and they’re very, very good at acting. One of the most celebrated and moving dramas of the century so far.

Marie Antoinette (2006): 2022 Oscar nominee Kirsten Dunst stars in this exuberantly colorful interpretation of the life of the infamous Queen of France. The film divided critics at the time, but it’s since become something of a classic, thanks to Dunst’s winning performance, the sumptuous and absurd design (it picked up an Oscar for its costumes) and its addictive pop score. An accurate historical document this is not, but it isn’t meant to be. Instead, "Marie Antoinette" lets us see a towering figure of history through her own teenage eyes. Rated PG-13. 122 minutes. Dir: Sofia Coppola. Also featuring Jason Schwartzman, Judy Davis, Rip Torn, Rose Byrne, Molly Shannon, Shirley Henderson, Danny Huston, Steve Coogan.