CHICAGO - Three years after its last in-person gathering, the South by Southwest (SXSW) festival made a glorious return to in-person festivities this year. The hybrid music/film/tech festival and convention featured plenty of buzzy events, from concerts from Shawn Mendes and T-Pain to a keynote from Lizzo, an early screening of the third season of "Atlanta" and a ton of film premieres.

FOX film critics Allison Shoemaker and Caroline Siede were on the ground in Austin, TX, trying to wrap their heads around all the weird, wonderful stuff the festival has to offer. Here’s volume two of their round-up of the most memorable things they experienced at this year’s fest. Read volume one of their dispatch here, featuring Cage on Cage on Cage, "Welcome to Flatch," a Lizzo styling salon and more. 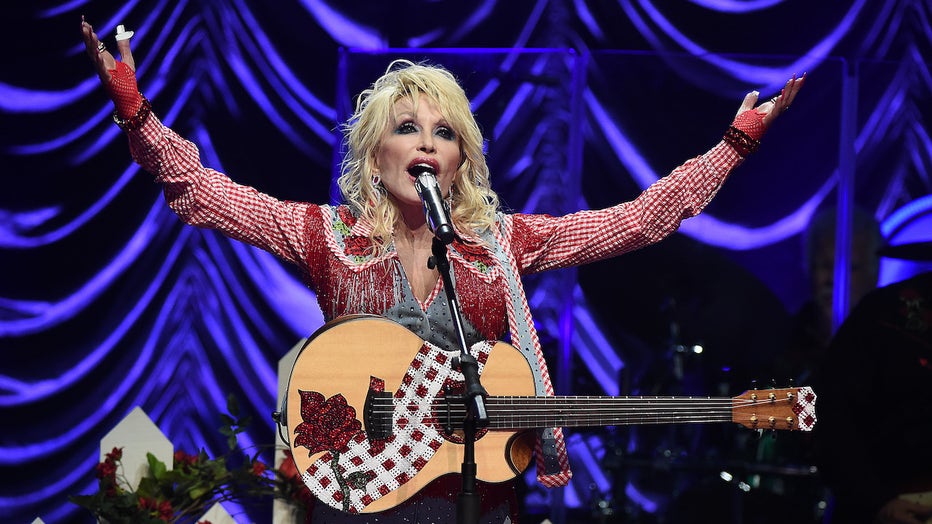 Dolly Parton isn’t just great. She’s the Grand Canyon. You may think you know how incredible she is, but until you see her in person, there’s no way to fully grasp the magnitude of her talents.

WATCH FREE ON TUBI: The Dolly Parton Story: From Rags to Rhinestones

That’s a lot of high-falutin’ language to describe a woman who famously said, "It costs a lot of money to look this cheap." And the singer-songwriter herself would almost certainly wave off such praise. Again and again throughout her first-ever performance at the South by Southwest (SXSW) music festival in Austin, Texas, Parton found ways to ground her extraordinary career and accomplishments in humbler soil. She was just a hillbilly with a dream. (Though "hillbilly" was the word she used, I’m mostly paraphrasing here — who can possibly take notes when you’re at a Dolly Parton concert?)

She’s only ever wanted to make music and bring people joy, she told the rapt audience at ACL Live at the Moody Theater, where Parton performed to celebrate the launch of the Dollyverse (her audience-centric Web3 collaboration with Blockchain Creative Labs, FOX Entertainment’s NFT Studio). If she sees someone without a smile, she says, "I just give them mine."

And it wasn’t just about the music. Parton was also there to promote the release of her new book "Run, Rose, Run" with juggernaut author James Patterson, which the pair discussed at some length in a lively panel moderated by "Friday Night Lights" star Connie Britton. If the only entertaining thing about that panel had been the custom jacket Parton’s costumer designed for Patterson, that alone would have made it worth watching, but unsurprisingly Dolly the novelist is every bit as charming as Dolly the singer/songwriter/movie star/philanthropist/mogul. (Also very engaging: the surprisingly funny James Patterson, who is evidently just as dazzled by Parton as the rest of the world.)

Read the rest of Allison Shoemaker’s feature on this unforgettable event.

This television station is owned by the FOX Corporation.

The premiere of "Everything Everywhere All At Once" 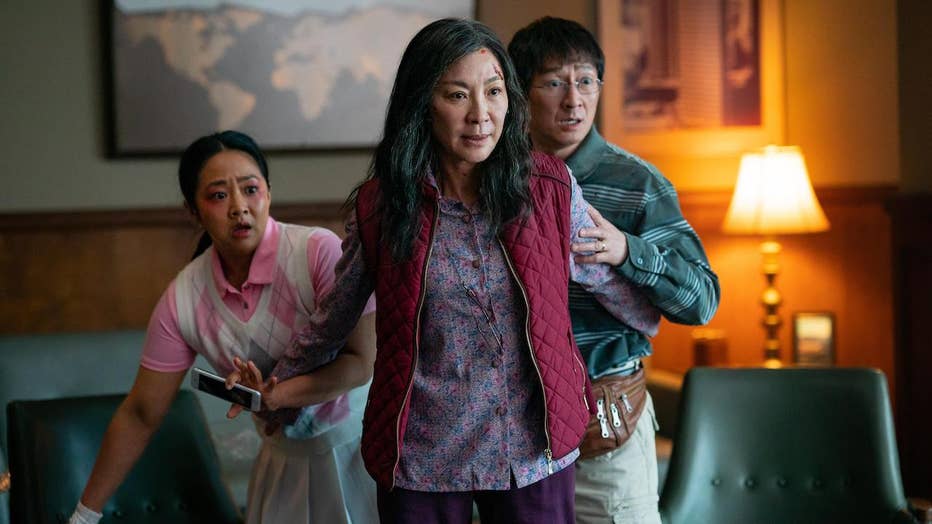 Every so often you watch a movie in a theater and can actually feel the people around you falling in love with it. That was the vibe at SXSW’s opening night premiere of "Everything Everywhere All At Once," the mind-bending arthouse action flick from auteurist directing duo Daniel Kwan and Daniel Scheinert, who bill themselves as simply "Daniels."

"Everything Everywhere" isn’t the kind of film you’d easily describe as a "crowd-pleaser" — it's massive scope touches on everything from nihilism, depression and generational trauma to a fight for the fate of the multiverse in which combatants battle for control of a butt-plug. But the crowd was pleased. Some of that comes down to the simple fact that, in addition to being a profoundly moving film, it’s also very, very funny — often at the same time. (One word: Raccacoonie. Another three words: Hot dog fingers. These things are funny! They also made me weep in silence! This film contains multitudes, as do we all!)

But there’s more to it than that. The thrill of experiencing a movie that is, to put it inelegantly, just so much movieelectrified the audience. And their delight was reflected in that of the directors and especially the cast, whose unabashed love for and joy in "Everything Everywhere" was palpable. Good movies get made every year. Truly original movies, less so. A film comprised of nothing but big swings that still manages to prioritize character and emotional honesty above all? That’s a unicorn.

And that’s what the SXSW audience got in "Everything Everywhere," thanks in no small part to a masterful performance from Michelle Yeoh. Caroline Siede does a marvelous job summing up the film and the strength of Yeoh’s performance inher review, which is well worth your time. Daniels aren’t reinventing the wheel here; for all its frenzied originality, the core of this story is a fairly straightforward hero’s journey, and Yeoh plays it as such. The world of the film is wild, but Yeoh acts as its core, a gravitational force that keeps even the butt-plug battle anchored in the truth of that journey. What a movie. [Allison Shoemaker]

"Everything Everywhere All At Once" is in limited release now and opens nationwide on April 8.

The first week of the fest capped off with a night honoring the films that were up for jury awards in the narrative feature, documentary feature and shorts competitions, along with design and special awards. It was a fun way to get a taste of the diversity of films playing at the fest, which included everything from a documentary about formerly incarcerated artist George Anthony Morton ("Master of Light") to an Irish thriller about a near-death experience ("It Is In Us All").

When "I Love My Dad" took the Grand Jury award in the Narrative Features Competition, writer/director/star James Morosini kicked off his speech by thanking his dad for catfishing him. But sweetest of all was teen winner Emilio Vazquez Reyes, who won the Texas High School Shorts category for his film "Honeybee" and gave a wonderfully surprised speech focused on thanking his family. [Caroline Siede]

Look for more on the films of SXSW later this week.

The sense of adventure 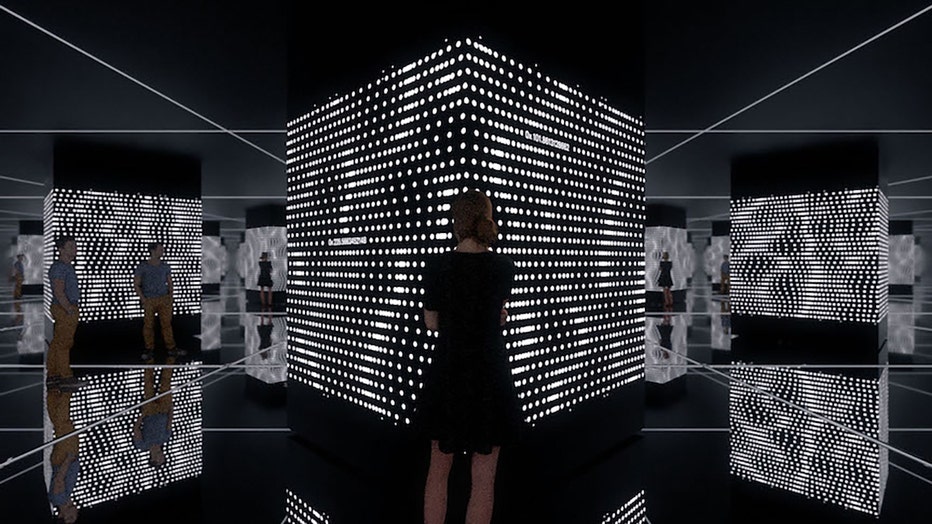 One thing it’s hard to understand about SXSW is that the event is massive and there’s no way you could possibly experience it all. There were half-a-dozen things I was hoping to try that I ran out of time for and many more secret events I didn’t even hear about until they were over. Once I accepted that FOMO (fear of missing out) was part of the experience, however, I had a lot of fun just exploring the festival and seeing where it took me.

At one point, I wandered into a big geodesic dome in something called "FLUF World," where I was suddenly transported to a blissed-out environment with a giant domed screen playing footage of humanoid rabbits. Later, I found myself in a massive convention hall with free arcade games.

I spent a few minutes watching a British dance-rock band called Los Bitchos at the "UK House," while Allison sang the praises of the free coffee at the Slack Digital HQ Experience, which, sadly I never got a chance to visit myself. 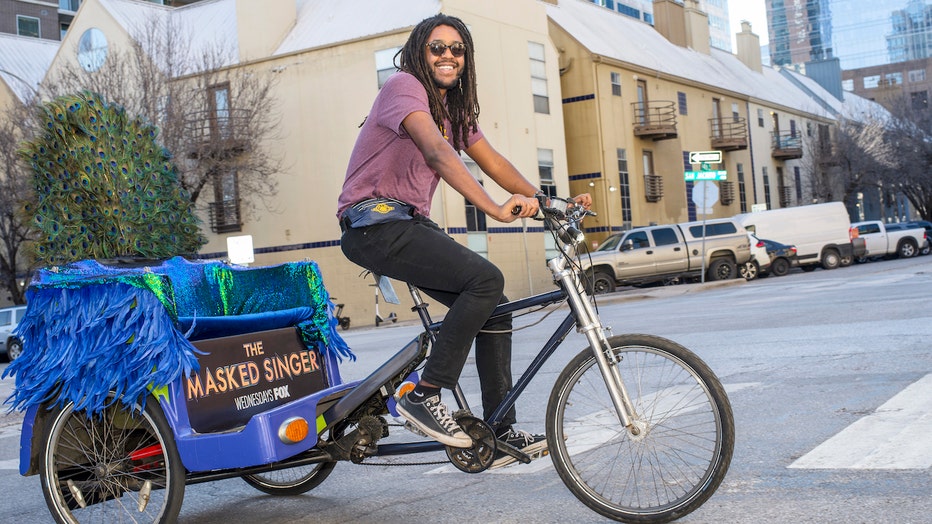 In between trying to track down the best tacos in Austin (Veracruz All Natural and Velvet Taco were my favorites), I took selfies at Blockchain Creative Lab’s NFT Ledger, "an infinite, immersive room that will scale a real-time visualization of blockchain data," and hopped in one of the free pedicabs that dotted the city throughout the event.

Of course, adventure has its limits too. I briefly considered trying to end my SXSW experience by dashing from the "Atlanta" premiere over to a Shawn Mendes concert several blocks away. In the end, I decided what I really needed to do was head back to the hotel and enjoy a nice chai tea latte. But, hey, there’s always next year. [Caroline Siede]

I had some marvelous adventures too, including an acoustic concert featuring Chicago legend Jon Langford and friends at a folk art gallery, a quest for some truly marvelous treats from "The Salty Donut" and an evening wandering in and out of various "Houses" for concerts and people-watching. But really I just wanted an excuse to add that I too enjoyed Los Bitchos, especially when the lead guitarist dedicated a song to Lindsay Lohan: "If you’re out there, I love you!" [Allison Shoemaker]

More from Texas, streaming (for free!) on Tubi