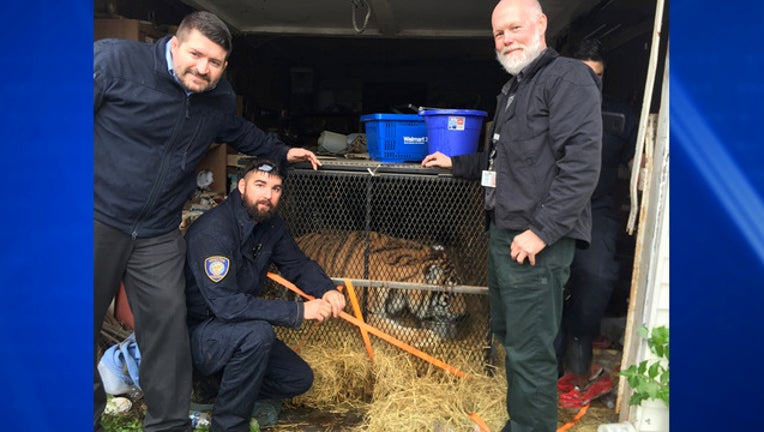 The City of Houston Administration & Regulatory Affairs Department released the following transcript of the anonymous call placed to 311 that led to BARC and Houston police seizing a tiger from a vacated southeast Houston home:

CALLER: That's what I'm saying because I'm not lying about this, I swear, but, uh so, I was with one of my friends, and we met this guy who knows this guy and like and he was like, oh, I need to go to my house to feed my tiger and he's like, I guess he sells (inaudible) cause he has money like that but uh he took us to the house-- the house is like abandoned like he's fixing it up right now, but he has the tiger in there. He has it in a cage. I don't know how he moved it there. I don't know how he even got it in there. But yeah it is there and like the (inaudible) and it's like in a small cage it's pretty big though it’s not even a baby tiger like it's pretty big. But I was wondering is this going to be like an anonymous call?

311: Ma’am, thank you for holding. We are going to take the report as anonymous. Our system is going to be anonymous I'm not going to put your name on the report or anything like that. But I did speak to my manager and they would at least like to a phone number on their side so they can contact you if they need to.

CALLER: It has a gate, like in front of it. And um I think there might be a few trucks out there. But no one is there for sure. No one lives in the house it's just run down.

311: So if we go there, the house just looks like it's vacant right?

CALLER: Yeah it’s like run down it kind of looks like a crack house, I would say, it kind of looks like that BUT if it anything maybe the neighbors might have heard something because it makes noise. And he does have it in a little cage in a back room in the back of the house on the left side.

Donate to The Humane Society of the United States — https://secure.humanesociety.org/site/Donation2?df_id=24384&24384.donation=form1&s_src=mr_tx_tiger_ffa_02132019&utm_source=syndication&utm_medium=mr&utm_campaign=tx_tiger_ffa