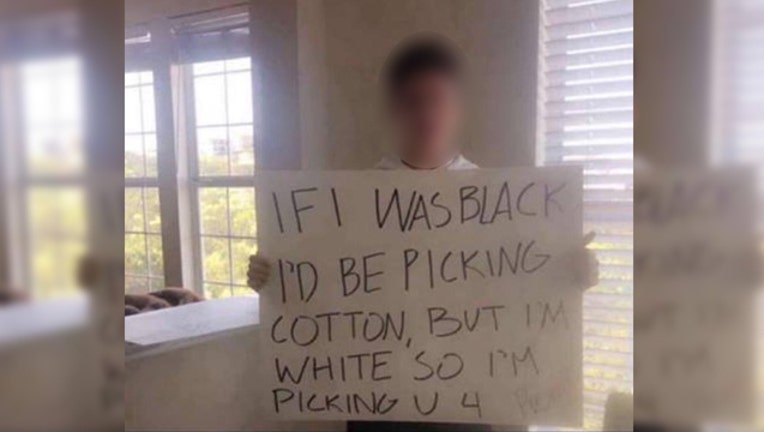 This screenshot has been altered to protect the identity of the student.

The proposal was sent via the popular social media app Snapchat and shows a student holding a sign that reads "If I was black I'd be picking cotton, but I'm white so I'm picking U 4 Prom."

Vandegrift High School principal Charlie Little issued a letter to families about the incident Monday. According to the letter, the preliminary investigation found that the student was intending the post to be a "humorous reenactment of a 2018 meme that garnered national attention."

There is absolutely nothing humorous about slavery, and its use in this context goes against the values and ethical principles we teach," Little wrote in the letter. "While inappropriate and disturbing, the student did not direct this unacceptable message at a particular individual with the intent to harass, bully or discriminate."

In 2018, 18-year-old Noah Crowley, a senior at Riverview High School in Sarasota, Fla., posted a photo of himself holding a sign with the same wording. According to a statement from his family, the school district and his family agrred to not allow Crowley to attend prom or graduation.

Little wrote in the letter that despite the intent, the school is working within their Student Code of Conduct to address what discipline would be appropriate.

"Despite its intent, we will continue to address the extensive concern this post caused our students, teachers, staff and families who take pride in the inclusive culture of our campus," Little wrote.