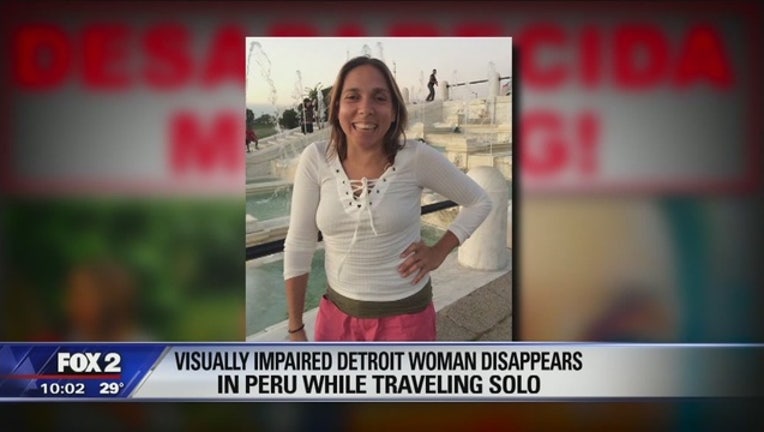 (FOX 2) - A brother is praying for the safe return ofa  Detroit woman who went missing while on vacation in Peru.

Carla Valpeoz has been missing for days and her cell is turned off, her family says as they plead for help. She's a world traveler but also a Detroiter with strong ties to the community.

"Carla. I love you. Please come back safe to us," said Carlos Valpeoz.

She started at the Arab American National Museum in Dearborn back in 2015 as a volunteer. She was later hired on giving guided tours to the public.

"She's worked for Michigan United, Southwest Community in Detroit. She basically does work for the people," Carlos said.

Her brother is speaking from his home in New York to anyone who will listen. His sister has been missing since December 12 and wasn't on her flight home to Detroit this Saturday.

Earlier this month she set off to South America for a friend's wedding, and according to her brother in New York, she stayed to check a few items off her bucket list.

"Machu Picchu, the Sacred Valley, the Mountain of 7 colors and a couple other sites," Carlos said.

Adding to the concern -- she is traveling alone and is nearly blind.

"She has extremely low vision. She uses a walking cane when she travels by herself. And she was having some difficulty getting into Machu Picchu based on her disability," Carlos said.

A group of tourists overheard her dilemma and invited her along, spending an entire day with her

"The were excited about their adventure and they wanted to go out to celebrate, so they they went out to a club in downtown Cusco. And  hey returned to the hostel around 4 a.m.," Carlos.

She went to bed and apparently continued her adventure alone in the morning.

"When the rest of the tour group woke up they went looking for her," Carlos said.

The front desk at the hostel provided the last clue to go on so far.

"She is seen on video getting into a taxi from the hostel. On Wednesday morning the 12th," Carlos said.

No cell phone calls or credit card usage since then according to her brother, prompting the international search. The state department says they are aware of Carla's disappearance but can't comment due to privacy concerns.