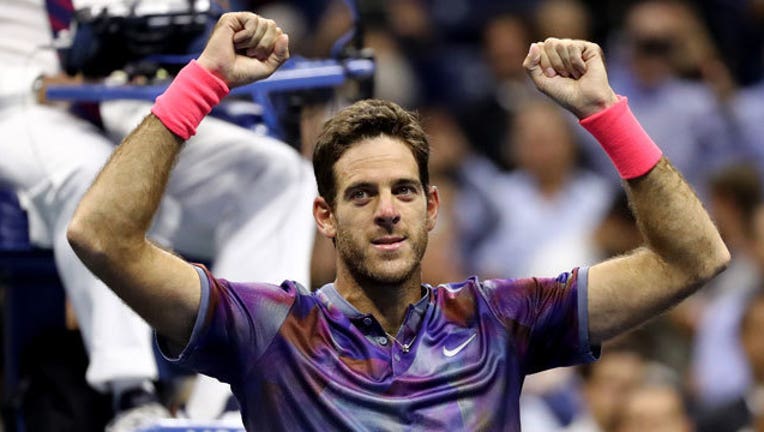 Juan Martin del Potro of Argentina celebrates after defeating Roger Federer of Switzerland in their Men's Singles Quarterfinal match on Day Ten of the 2017 US Open on September 6, 2017 in New York City.

NEW YORK (AP) - So much for the first U.S. Open matchup between Roger Federer and Rafael Nadal.

Federer failed to live up to his end of the bargain.

Hours after Nadal did his part with an easy-as-can-be victory to get to the semifinals at Flushing Meadows, Federer was unable to join him for what would have been the most-anticipated showdown of the entire two weeks, wasting chances to take control and missing shots he normally makes in a 7-5, 3-6, 7-6 (8), 6-4 loss to 2009 champion Juan Martin del Potro on Wednesday night.

"He came up with the goods when he needed to," Federer said, "and I helped him a little bit sometimes, too, maybe."

Federer described himself as too "edgy" and said "that little magic was missing."

He also insisted that, unlike just about everyone else, he did not spend any time at all pondering a possible matchup with Nadal at the only Grand Slam tournament where they've never met. Their wonderful rivalry has included 37 matches, and at least two finals at each of the other majors.

"I had struggled too much throughout the tournament," Federer said, "to think too far ahead."

Given that he is 36, and Nadal is 31, perhaps it is time for the tennis world to concede that Roger vs. Rafa at the U.S. Open just will never happen.

This is the sixth occasion when they were a round away from playing in New York, but one or the other lost - including eight years ago, when del Potro beat Nadal in the semifinals, then Federer in the final to end the Swiss star's run of five consecutive titles at the tournament.

This time, Federer entered the quarterfinals 18-0 in Grand Slam play this season, including titles at the Australian Open and Wimbledon to raise his record count to 19 major championships.

But he tweaked his back at a tournament last month, curtailing his preparation for the U.S. Open, and he was not quite at his best for stretches. He needed five sets to win each of his first two matches - and Wednesday, he succumbed to the del Potro's familiar formula of massive forehands and booming serves .

Before the U.S. Open began, Nadal was honest as can be when asked whether he hoped to face Federer. The answer, the No. 1-seeded Nadal said earnestly, was no - because he'd rather go up against someone easier to beat.

Well, as it turns out, he'll face the 24th-seeded del Potro on Friday. It is the first major semifinal for del Potro since 2013; he missed two years' worth of Grand Slam tournaments until Wimbledon in 2016 because of three operations on his left wrist.

The other semifinal features two men who have never been this far at any major: No. 12 Pablo Carreno Busta of Spain vs. No. 28 Kevin Anderson of South Africa.

The women's semifinals are both all-American matchups, the first time that's happened at the U.S. Open in 36 years : No. 9 Venus Williams vs. unseeded Sloane Stephens, and No. 15 Madison Keys vs. No. 20 CoCo Vandeweghe.

Nadal, who won two of his 15 Grand Slam trophies in New York, overwhelmed 19-year-old Russian Andrey Rublev 6-1, 6-2, 6-2 in the quarterfinals, then had to wait hours to see what Federer would do under the lights against del Potro.

There was some sublime shotmaking by each player, but also some real shakiness from the 36-year-old Federer, whose forehand in particular was problematic: 22 of his 41 unforced errors came on that stroke.

The turning point was the third-set tiebreaker, which Federer was a single point from winning on four occasions.

At 6-4, del Potro hammered a good return that caught Federer off-guard, resulting in a forehand into the net. At 6-5, del Potro delivered a service winner. At 7-6 - set up by a double-fault from del Potro - Federer missed a backhand, and his wife, Mirka, put her hands to her temples, before standing to offer encouragement. At 8-7, Federer's fourth and last set point, del Potro hit a huge forehand winner.

That began a run of three points in a row for del Potro to claim that set, the last when Federer pushed a backhand volley long.

The suspense in the fourth set was brief: At 2-all, Federer dumped an overhead into the bottom of the net to gift del Potro a third break point in that game. It was converted with a stinging cross-court backhand return winner.

"I did everything well. I served so good. I hit my forehand as hard as I can," del Potro said. "And I think we played a great match and I deserved to win at the end."

He showed no residual effects from his 3 1/2-hour, five-set comeback victory in the fourth round - or the illness that had the 6-foot-6 (1.98-meter) Argentine coughing into a towel in the second set Wednesday. One of his many powerful and precise forehands stood out: a reflex passing shot struck so hard and so close to the at-the-net Federer's head that he ducked out of the way.

"It was one of those matches where, if I ran into a good guy, I was going to lose, I felt. I don't want to say I was in a negative mindset, but I knew going in that I'm not in a safe place," Federer said. "Rightfully so, I'm out of this tournament, because I wasn't good enough - in my mind, in my body, and in my game. ... If you're missing all three, it's going to be tough."