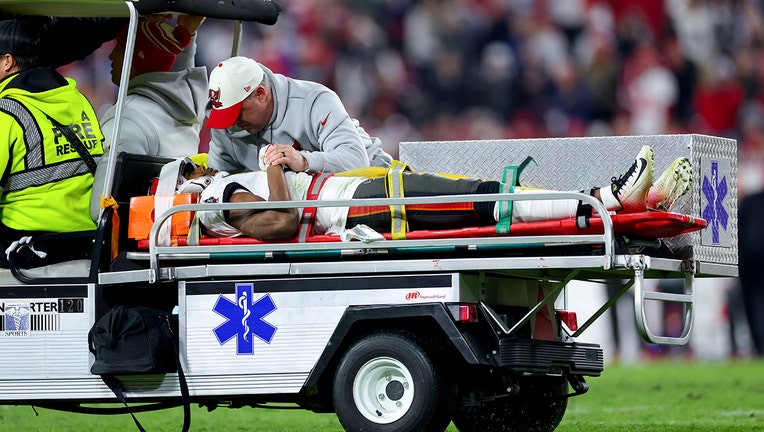 Russell Gage #17 of the Tampa Bay Buccaneers is carted off the field after suffering an injury against the Dallas Cowboys during the fourth quarter in the NFC Wild Card playoff game at Raymond James Stadium on January 16, 2023 in Tampa, Florida. (Pho

TAMPA, Fla. - Late in the fourth quarter of Tampa Bay's game against the Dallas Cowboys, one Buccaneer was taken off the field by a stretcher. The team said wide receiver Russell Gage had a concussion and a neck injury.

In a Tuesday morning update, the Buccaneers said Gage was hospitalized overnight for "additional testing and observation." They noted he "has movement in all extremities and will continue to undergo additional testing today."

Hours later, head coach Todd Bowles delivered the news everyone had been eagerly anticipating: "He should be released this afternoon."

Gage himself took to Twitter to thank fans for the well-wishes on his recovery.

"I appreciate all of the texts, calls, thoughts and prayers you all have expressed towards my family and I," he wrote. "I just wanted to let you all know that I’m doing great and in great spirits! Thank you!"

Gage was injured when he stumbled on a route, went to the ground, couldn’t make the catch, and took a hard shot to the neck from Donovan Wilson.

He appeared to try to get up but couldn’t and slammed his hand into the ground in frustration. 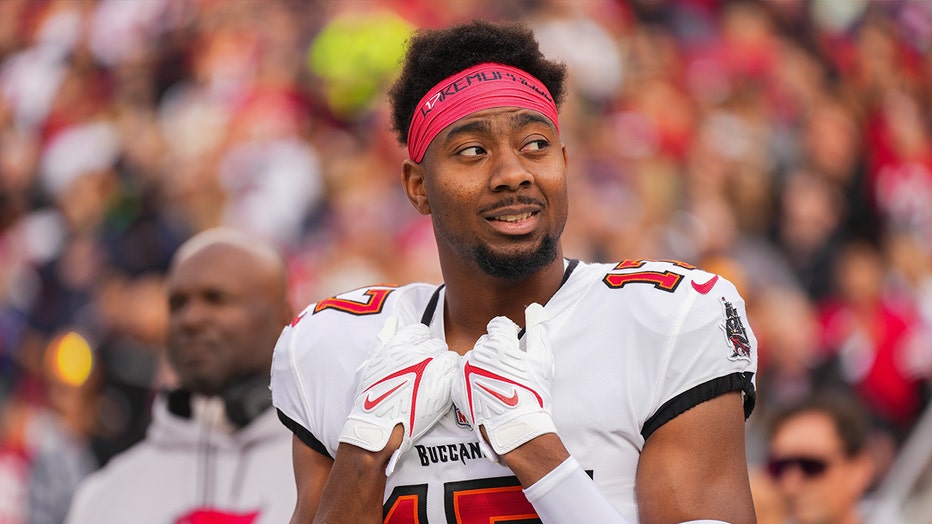 Russell Gage #17 of the Tampa Bay Buccaneers stands during the national anthem against the San Francisco 49ers at Levi's Stadium on December 11, 2022 in Santa Clara, California. (Photo by Cooper Neill/Getty Images)

Players from both teams took a knee and prayed while medical personnel attended to Gage. Tom Brady, who threw the pass to Gage, stood near the medical staff before the game resumed.

The sobering moment occurred in front of a prime-time audience on Monday night and just two weeks after Buffalo Bills safety Damar Hamlin collapsed and needed to be resuscitated on the field,

On Jan. 2, Hamlin went into cardiac arrest after making a tackle. His teammates were in tears while he was taken by ambulance to a hospital in Cincinnati. Hamlin has made a remarkable recovery and watched from home as the Bills beat the Dolphins in an AFC wild-card game.

The Bucs fell short during the playoff game against the Dallas Cowboys. Despite the best efforts of Brady and the rest of the team, their season ended with a 31-14 loss. Tampa Bay defeated the Cowboys team earlier in the season but couldn't pull off the second win to go to the playoffs.

The team went through a season of ups and downs with injuries and inconsistency on offense, but the team that took the field Monday appeared to be the healthiest Bucs fans saw all season.

Despite that, Dallas quarterback Dak Prescott outplayed Tom Brady, throwing for four touchdowns and running for another to lead the Dallas Cowboys to its victory.