LOS ANGELES - As Gov. Gavin Newsom prepares to release plans for how religious institutions can reopen in California during the coronavirus pandemic, health officials announced that two church services that were held without authorization have been sources of outbreaks.

Mendocino County public health officials said Sunday that six more people who participated in a Mother’s Day service at Assembly of God Church in Redwood Valley contracted the virus, raising the number of cases to nine and making the outbreak responsible for a third of local infections.

Newsom was expected to provide plans Monday on reopening churches.

• Some churches will reopen, they say with or without Gov. Newsom’s permission 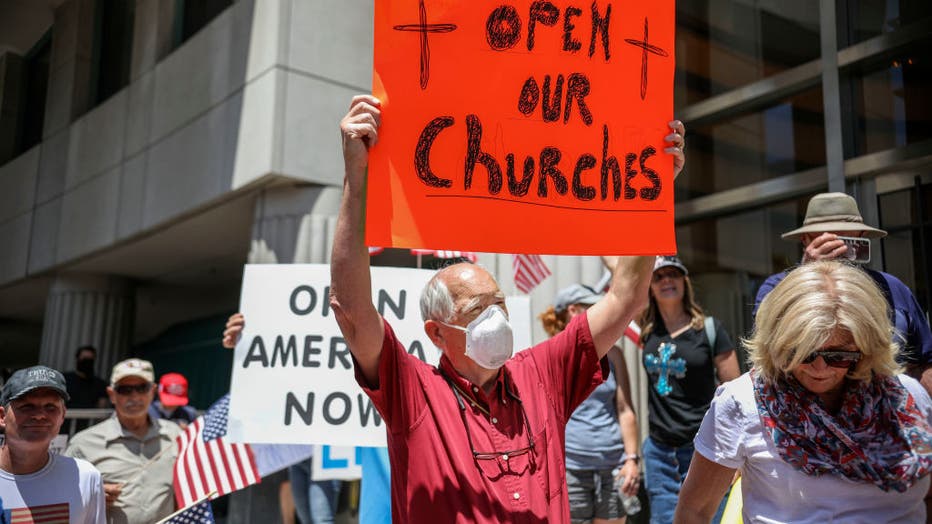 Demonstrators holding signs demanding their church to reopen, protest during a rally to re-open California and against Stay-At-Home directives on May 1, 2020 in San Diego, California. - Rallies have been held at several state capitols across the coun

Some places of worship around the country opened their doors over the weekend after President Donald Trump declared such places essential and the federal Centers for Disease Control and Prevention released guidelines for reopening faith organizations.

Newsom has taken a more cautious approach: Last week, many counties in California had received approval to reopen businesses including retail shops and restaurants as permitted in the second phase of his plan to restart the state economy. Churches are not allowed to reopen until the plan’s third phase.

The approach has angered opponents who claim that California’s rules to stop the spread of the virus violate religious freedoms. Many had already announced they would violate the state order and hold in-person services next Sunday, on Pentecost.

A Pentecostal church in San Diego sued to reopen immediately, but lost its appeal on Friday when the 9th Circuit Court of Appeals upheld Newsom’s ban on in-person services. In a split ruling, a court panel found that government’s emergency powers override what in normal times would be fundamental constitutional rights.

Stay-at-home restrictions have eased across much of the state, which has seen a decline in COVID-19 hospitalizations. Some 47 of 58 counties have received permission to move deeper into the second of Newsom’s four-phase reopening by meeting state standards for controlling the virus.

In the mountain resort community of Big Bear Lake, a steady stream of out-of-town visitors stopped at the Copper Q cafe on Sunday to pick up to-go coffee and baked goods. The city in San Bernardino County northeast of Los Angeles announced last week that it would not enforce Newsom’s safety orders, arguing it has kept COVID-19 cases manageable and there has been significant economic harm.

“It’s not packed, but the crowds are decent,” Copper Q manager Ashley Coleman said. “People are keeping their distance, and everyone’s wearing masks of course.”

Many Southern California beaches were open only for swimming, running and other activities. Sunbathing and group activities such as volleyball were prohibited.

Social distancing practices have been cited as the main reason rates of deaths and hospitalizations have slowed in many counties. People were urged to keep their masks on and their guard up while enjoying recently reopened bike paths, hiking trails and beaches.

“It’s nice outside. That doesn’t mean #COVID19 has gone away. Wash your hands. Stay 6 feet apart. Wear a face covering. Be smart. Your actions can literally save lives,” Newsom tweeted Sunday.

Many families flocked to San Francisco’s Baker Beach to enjoy the sunny weather and spectacular view of the Golden Gate Bridge. Sara Stewart, 27, said that as the beach got more crowded, she retreated to a sand dune to get away from people.

“People were trying their hardest to socially distance, but the more and more crowded it got, the harder it was,” Stewart said.

Volunteers patrolled Dolores Park to offer masks and ensure people were staying in large chalk “social distancing” circles drawn on the grass to show people where to sit. The park has seen large masses of people on sunny weekends, prompting Mayor London Breed to warn that she would shut it down if people weren’t more responsible.

Not everyone rushed to enjoy the outdoors. Several hundred protesters rallied outside Los Angeles City Hall on Sunday and outside the state Capitol in Sacramento on Saturday to demand that Newsom fully lift his restrictions on businesses, religious gatherings and other activities.

Los Angeles County, the state’s largest with 10 million people, is not planning to reopen more widely until the next summer holiday, July 4th, because it has a disproportionately large share of the state’s coronavirus cases and can’t meet even new, relaxed state standards for allowing additional businesses and recreational activities.

The state is still seeing troubling COVID-19 flare-ups. More than 150 employees at a Farmer John meatpacking plant in Vernon, an industrial city five miles south of downtown Los Angeles, contracted the coronavirus. Imperial County, across the border from Mexico, has seen a surge. Two inmates from the California Institution for Men in San Bernardino County died Sunday from what appear to be complications related to COVID-19, raising the death toll to nine, state corrections officials said.