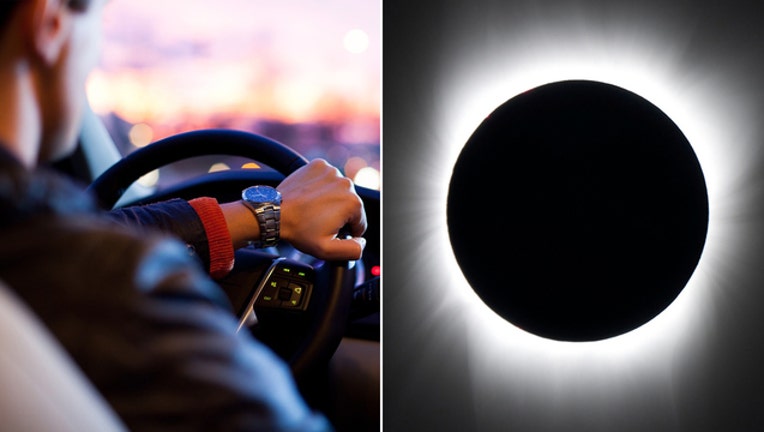 WASHINGTON - The solar eclipse sweeping across the U.S. on Monday, dubbed the Great American Eclipse, will be a sight to behold, which is a slight cause for concern for motorist on roadways during the phenomenon.

Officials are urging drivers to plan ahead and to use common sense when the coast-to-coast total solar eclipse happens in the United States for the first time since 1918.

Motorist should know when the solar eclipse will occur in the area they’re planning to drive through.

RELATED: Total solar eclipse map shows what it will look like from wherever you are

For the D.C. region, people will begin to see the effects of the eclipse beginning at about 1:15 p.m. and full sunshine should return to the region at about 4 p.m.

The main event, or peak viewing time, will be at approximately 2:42 p.m.

RELATED: What time to see the total solar eclipse in DC

If you happen to be traveling during this time, officials urge you to pay attention to the roadway. AAA said attempting to watch the solar eclipse while driving could be just as distracting, if not more distracting, than texting. It could also damage your eyesight.

Law enforcement and highway safety advocates are also urging drivers to not stop on the shoulder of a busy interstate or slow down in the middle of a roadway. If you want to witness the solar eclipse, you should exit the roadway and park in a safe area away from traffic.

RELATED: 5 things to know about the total solar eclipse on Aug. 21

While many will think, “I’ll be paying attention to the road,” officials urged motorist to be on the lookout for other drivers who may not be. Motorist should be extra cautious of the drivers around them when traveling through an area under the effects of the solar eclipse.

RELATED: How to make pinhole projector to view solar eclipse