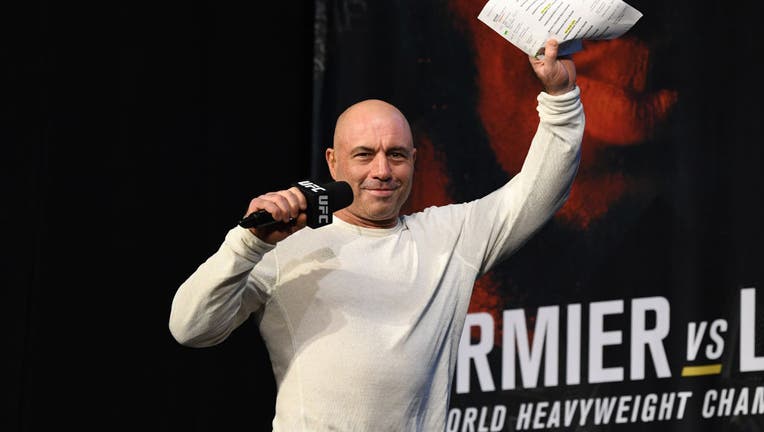 Joe Rogan walks onto the stage during the UFC 230 weigh-in inside Hulu Theater at Madison Square Garden on November 2, 2018 in New York, New York.

LOS ANGELES - Nearly 300 medical experts are urging Spotify to take action against the streaming platform’s most popular podcast, "The Joe Rogan Experience," for "broadcasting misinformation, particularly regarding the COVID-19 pandemic."

In an open letter to Spotify signed by 270 professors, scientists, doctors and health care workers, writers criticized a controversial episode featuring Dr. Robert Malone, who went on Rogan’s show to promote an unfounded theory taking root online suggesting that millions of people have been "hypnotized" into believing mainstream ideas about the ongoing pandemic.

The episode was published on Dec. 31, and featured Malone discussing a term widely shared online known as "mass formation psychosis."

"The episode has been criticized for promoting baseless conspiracy theories and the JRE has a concerning history of broadcasting misinformation, particularly regarding the COVID-19 pandemic," the letter wrote. "By allowing the propagation of false and societally harmful assertions, Spotify is enabling its hosted media to damage public trust in scientific research and sow doubt in the credibility of data-driven guidance offered by medical professionals."

In the episode they are referring to, Malone cast doubt on COVID-19 vaccine safety and claimed the mass psychosis has resulted in a "third of the population basically being hypnotized" into believing what Dr. Anthony Fauci, the nation’s top infectious disease expert, and mainstream news outlets say.

Malone went on to say that the phenomenon explained Nazi Germany.

Doctors say you should not deliberately catch omicron variant

According to healthcare professionals, the recent trend of trying to get infected with the omicron variant on purpose is risky and not advised.

"When you have a society that has become decoupled from each other and has free-floating anxiety in a sense that things don’t make sense, we can’t understand it, and then their attention gets focused by a leader or a series of events on one small point, just like hypnosis, they literally become hypnotized and can be led anywhere," Malone said. He claimed such people will not allow the "narrative" to be questioned.

The coalition of medical experts did not suggest any one particular form of action but urged more is needed to prevent misinformation from spreading to the podcast’s estimated 11 million listeners.

"Throughout the COVID-19 pandemic, Joe Rogan has repeatedly spread misleading and false claims on his podcast, provoking distrust in science and medicine. He has discouraged vaccination in young people and children, incorrectly claimed that mRNA vaccines are ‘gene therapy,’ promoted off-label use of ivermectin to treat COVID-19 (contrary to FDA warnings), and spread a number of unsubstantiated conspiracy theories," the letter wrote.

Meanwhile, psychology experts say there is no support for the "psychosis" theory described by Malone.

"To my knowledge, there’s no evidence whatsoever for this concept," Jay Van Bavel, an assistant professor of psychology and neural science at New York University, told the Associated Press.

Van Bavel recently co-authored a book on group identities. He said he had never encountered the phrase "mass formation psychosis" in his years of research, nor could he find it in any peer-reviewed literature.

"The concept has no academic credibility," Stephen Reicher, a social psychology professor at the University of St Andrews in the U.K., wrote in an email to The Associated Press.

The term also does not appear in the American Psychological Association’s Dictionary of Psychology.

"Psychosis" is a term that refers to conditions that involve some disconnect from reality. According to a National Institutes of Health estimate, about 3% of people experience some form of psychosis at some time in their lives.