3 arrested after dog found with back legs amputated, possibly having been sawed off

A Louisiana mother and daughter along with another teen were arrested for cruelty to animals after a 2-year-old dog was found in the pouring rain with its back legs amputated, possibly having been sawed off, according to police.

ST. TAMMANY PARISH, La. - A Louisiana mother and daughter along with another teen were arrested for cruelty to animals after a 2-year-old dog was found in the pouring rain with its back legs amputated, possibly having been sawed off, according to police.

“As a dog owner myself, I was completely appalled when we received a complaint of such horrific animal cruelty in our community. Our investigators acted swiftly, and the parties responsible have been charged accordingly,” Sheriff Randy Smith told WGNO-TV. 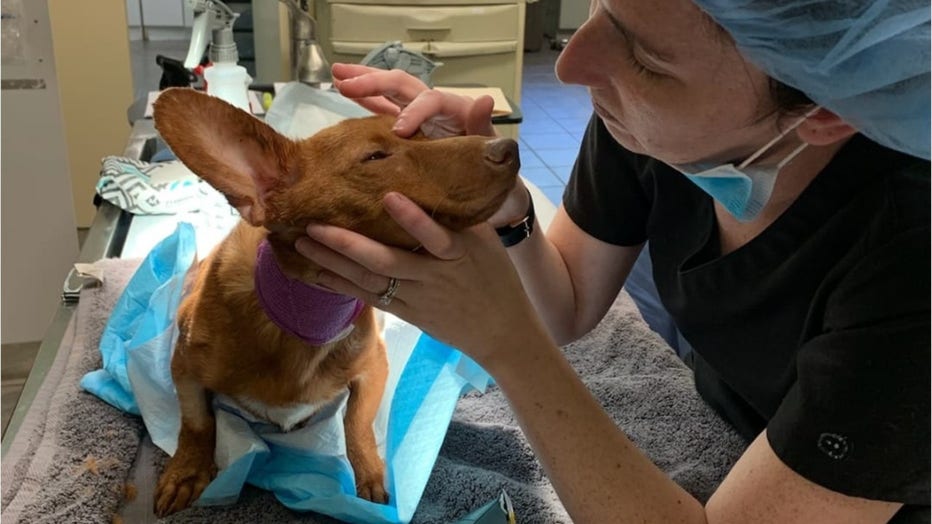 Three people were arrested for cruelty to animals after Buddy, a 2-year-old dog, was found in the pouring rain with its back legs amputated, possibly having been sawed off, according to police. (Photo Courtesy: Dante's Hope - Animal Rescue East)

The dog, named Buddy, was found in a mobile home park in Slidell with its hind legs missing, the report said.

Police said the mother and daughter were Buddy’s original owners and claimed that his legs were paralyzed after he was shot in February, according to WWL-TV. The mother and daughter reported Buddy's shooting to police, but did not obtain proper medical care for him, police told the station.

But a veterinary expert helping with Buddy’s care and recovery told WWL-TV that the examination showed Buddy’s wounds were “maliciously inflicted” and that his bones had “irregular separation.”

The veterinarian also confirmed that Buddy’s limbs were not removed by a veterinary professional, and that they did not fall off naturally, WGNO-TV reported.

An online fundraiser set up to assist with Buddy’s medical expenses has raised nearly $15,000 from over 500 people’s donations.

“After a examination the Doctor determined what happened to Buddy was done Deliberately!! Buddy’s back legs were intentionally sawed off!! He has bone sticking out and infection setting in. Due to blood loss he had to have a blood transfusion today in order to survive,” the fundraiser said. “His wounds were cleaned, He had an IV and urinary catheter placed and is now on IV antibiotics and pain meds until his values come up enough to survive surgery. His x-rays also show he has 2 bullets near his back.”

“We are letting the proper authorities take care of the criminal that did this..Our first priority is to save Buddy. BUT WE WILL NOT SIT QUIET! This level of cruelty is unacceptable! THIS HAPPEN RIGHT HERE IN ST. TAMMANY PARISH!!”

Dante’s Hope Animal Rescue said Monday that Buddy is doing better but still has to undergo his scheduled surgery.