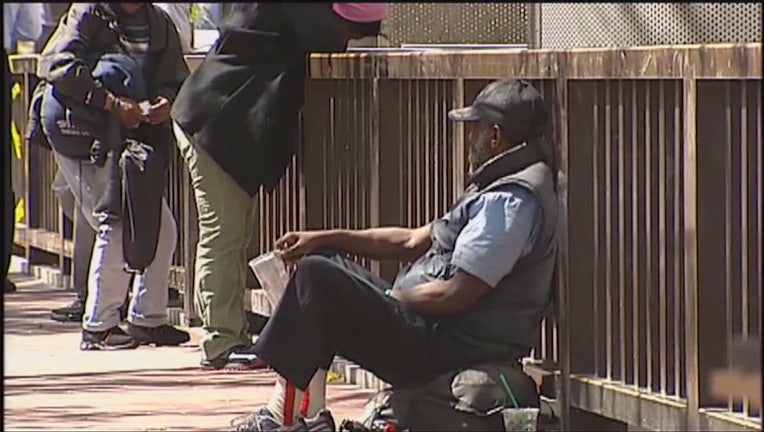 SACRAMENTO, Calif. - As worries about the spread of the coronavirus confine millions of Californians to their homes, concern is growing about those who have no homes in which to shelter. Gov. Gavin Newsom estimates up to 60,000 homeless could end up infected.

California has more than 150,000 homeless people, the most in the nation, and as the rest of the state’s residents are being told to stay apart and to frequently wash their hands, the homeless are living just as they did before the outbreak.

The virus is spread by coughing and sneezing and could easily sweep through homeless encampments where people live live close together and hygiene is poor or nonexistent.

Newsom on Wednesday said it’s possible 60,000 could contract the virus and overwhelm the state’s health care systems. The governor announced he would spend $150 million on efforts to shield that population from the virus.

Los Angeles Mayor Eric Garcetti said the city is making an emergency effort to provide immediate temporary housing for thousands of homeless people in the face of the coronavirus outbreak.

“I hope you get a sense of the seriousness we’re taking the issue of homelessness,” Newsom said in a Facebook Live broadcast.

Two-thirds of the money will go directly to local governments to spend on homeless services and $50 million will be used by the state to purchase 1,300 travel trailers and lease hotel rooms for emergency housing.

The trailers will be used for homeless people requiring isolation after testing positive for the virus or who are showing symptoms. California also has identified 950 hotels that could lease rooms to local governments to house the homeless.

In Los Angeles, Mayor Eric Garcetti announced that the city, through the Red Cross, will provide 6,000 emergency beds at recreation centers, including 1,600 by week’s end.

• Garcetti plans to bring 6,000 beds in weeks for homeless amid coronavirus

Los Angeles has an estimated 27,000 of the county’s 60,000 homeless people. Garcetti said the Los Angeles Homeless Services Authority will be asked to identify 4,000 people throughout the county who are most at risk from the virus because of their age or medical conditions.

People in shelters who have virus symptoms will be taken to receive medical care, Garcetti said.

To date, the city hasn’t confirmed any virus cases among homeless people, who are difficult to test and treat because they may move frequently or refuse medical care.

The city also has set up hundreds of hand-washing stations and mobile toilets at homeless encampments and the City Council voted Tuesday to suspend an ordinance requiring homeless people to take down their tents during the day so that transients can at least shelter there.

California has at least 870 confirmed cases and 16 deaths, according to a tally by Johns Hopkins University. More than 11,900 people in California are self-monitoring after returning from overseas.

Meanwhile, the pandemic continued to affect virtually every facet of Californians’ lives as businesses shut down, either because they weren’t considered “essential” under shelter-in-place health orders or for lack of customers as streets turned into ghost towns.

Newsom said that the state had received 80,000 claims for unemployment on Tuesday, compared to the usual rate of about 2,000 per day.

The governor has issued a series of emergency orders as the crisis spreads. Last week he urged all people over 65 and those with underlying health conditions to stay inside. He also limited the size of gatherings to 250 people and called for the shutdown of bars, movie theaters, fitness centers and other gathering places, and for restaurants to only serve to-go orders.

With virtually all of the state’s children out of school because of closures, Newsom suspended standardized testing this spring. And with the economy shedding jobs he waived certain reporting requirements for businesses making mass layoffs.

Newsom said he will not issue a statewide lockdown on people’s movements, preferring to allow local governments to make those decisions. And many have enacted tighter restrictions.

Residents of the city of Fresno began living under a shelter-in-place order Thursday that is similar to actions taken by at least 15 counties in the northern half of the state. The entire San Francisco Bay is part of the area covered by the restrictions affecting more than 10 million people.

RELATED: List of California cities ordered to 'shelter in place’

Residents have been told to stay home and go out only for essential purposes such as trips to grocery stores and to jobs in health care and other industries deemed critical.

In Southern California, the city of Palm Springs enacted similar restrictions. Los Angeles, San Diego and other major population centers in the region have not gone that far but have urged people to remain at home as much as possible.

RELATED: Get the latest news on the coronavirus at CoronavirusNOW.com

Although Newsom hasn’t ordered school closures, local authorities have done so. The governor said nearly 99% of the state’s K-12 schools are shuttered and could remain so for the rest of the school year.