VIEWER DISCRETION ADVISED: Some of the content in this story depicts incidents that are graphic in nature, which some viewers may find disturbing.

The Chicago Police Department released video on Wednesday that shows a frame-by-frame depiction of the fatal shooting of Anthony Alvarez in Portage Park on March 31, 2021.

Body-cam video shows police chase Alvarez down an alley before shooting him several times in the front yard of a home on the 5200 block of West Eddy Street in the early-morning hours of March 31.

In a statement provided by the Alvarez family attorney, Anthony Alvarez’s legacy is his two-year-old daughter and the fact that he was one of the best soccer players in Chicago.

A Chicago police officer yells "Drop the gun! Drop the gun!" before firing five shots from close range, according to the police bodycam video released by COPA, which investigates police shootings.

While lying on the ground, Alvarez asks police, "Why did you shoot me?"

"You had a gun," said the officer, who then tells his partner to place handcuffs on Alvarez.

"No, I’m going to render aid," his partner says before applying a tourniquet and administering chest compressions.

A gun appears to be visible in Alvarez’s right hand in the footage captured by the body camera of the officer who pulled the trigger. A camera mounted to the home feet from where Alvarez collapsed also appears to show a gun fall from his hand as he fell to the pavement.

The video doesn’t show Alvarez pointing a gun at the officers in pursuit.

Police have not said what sparked the initial foot chase. After the shooting, Chicago police spokesman Tom Ahern shared a photo of the gun allegedly recovered from Alvarez. 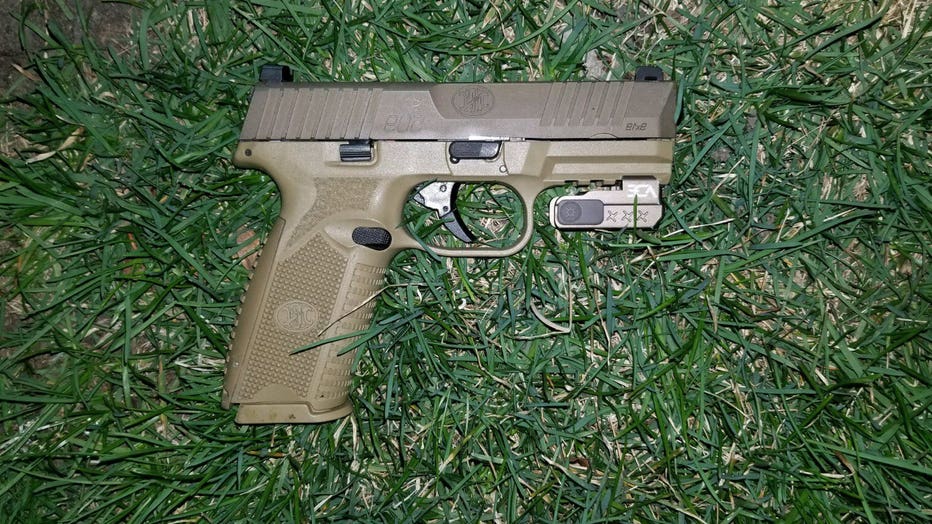 After the shooting, Chicago police spokesman Tom Ahern shared a photo of the gun allegedly recovered from Alvarez.

The officers involved in the shooting of Alvarez were placed on routine administrative duties for 30 days. The officer who shot Alvarez has been identified by COPA as 29-year-old Evan Solano, who has been with the Chicago Police Department for five years.

On Tuesday night, the family of Alvarez viewed footage of the shooting at COPA Headquarters showing his fatal shooting, along with the foot chase that led up to it.

After viewing the video, family members say they have more questions than answers.

"I want more answers," said Alvarez's mother, Veronica, through a translator. "The videos I saw do not explain what I saw in the morgue. I want justice for Anthony. I want to know why they were running after him."

After viewing the video, family members say they have more questions than answers.

Family attorney Todd Pugh called for a fair and balanced investigation by COPA.

"It was incredibly difficult. It was an absolutely chilling scene," Pugh said. "It has really left us with more questions than answers. But I know what I saw. And I saw Chicago Police officers shoot their son as he ran away from them."

Mayor Lori Lightfoot and the Alvarez family released a joint statement on Wednesday, calling for peace in the aftermath of the video's release.

"Both parties are acutely aware of the range of emotions that will accompany the release of these materials, and we collectively issue this statement and ask that those who wish to express themselves do so peacefully and with respect for our communities and the residents of Chicago," the statement read.

"Today, Chicago’s Civilian Office of Police Accountability (COPA) released body-camera footage of the fatal police shooting of Anthony Alvarez. To see this young man, who was also a young father, dying in the prime of his life is incredibly heartbreaking. Together, we offer our deepest condolences to the Alvarez family and all those who knew and loved Anthony.

It is of utmost importance to note that this tragedy happened the same week that Chicago police shot and killed 13-year-old Adam Toledo. As the impact of Adam’s death continues to weigh heavily on our city, and particularly on Chicago’s Latinx community, we recognize that the release of today’s footage will understandably elicit an emotional and painful response from many residents.

People across our city and our nation are demanding justice, accountability, and meaningful steps towards police reform in Chicago. All three of us support these demands and are working tirelessly to create meaningful and comprehensive measures that will reform law enforcement and rebuild public trust in the Chicago Police Department (CPD). We all also agree that the CPD must present a revised foot pursuit as quickly as possible. A minor and inconsequential incident should never, and can never again, result in someone’s death.

COPA is already four weeks into their investigation of this incident, and the Mayor has directed it to ensure this investigation is both expeditious and thorough. In the meantime, we urge our residents to continue calling for justice, accountability, and reform and exercise their First Amendment rights peacefully with respect to Anthony’s family and memory.

The loss of our city’s youth can no longer be the milestones by which we measure our collective failure. As a City, we must do better."

The shooting happened about two days after an officer shot and killed 13-year old Adam Toledo on March 29 in Little Village. Toledo’s killing, which also occurred during a foot chase, prompted Lightfoot to direct the police department to draft a new foot pursuit policy.