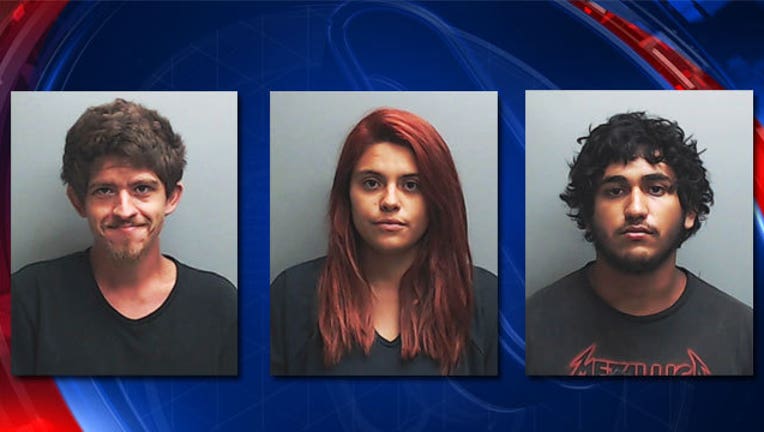 Four suspects have been arrested by the Hays County Sheriff's Office. The four suspects approached victims at a Hampton Inn, one was armed wuth a handgun and another with a baseball bat, and demanded money.

On June 8, 2016 at 12:45 a.m. Hays County deputies were dispatched to the area of F.M. 2001 and IH 35 in the Buda area for a “Disturbance in Progress” involving weapons. Deputies responded and located the victims at the Hampton Inn, 1201 Cabela’s Drive in Buda.

Deputies learned from the victims that they went to an address in the 4400 block of Dacy Lane They were approached by four subjects, one of which was armed with a handgun and another with a baseball bat, demanding money from them. As the victim’s attempted to flee, the suspect armed with the handgun fired at the vehicle striking it.

The victims, that were shot at included two children one and two years old.

Neither of the victims were wounded in the attack.

Officers from the Buda Police Department assisted with a search of the area, and located the suspect vehicle at the HEB located at 15300 S IH-35. The three adult suspects were subsequently arrested and booked into the Hays County Jail. The fourth suspect, a juvenile, was released to the parents pending further investigation.

The suspects are identified below as:

All three adult suspects were charged with:

Anyone with information regarding this or any case may the Hays County Sheriff’s Office at 512-393-7896 and speak with the Criminal Investigations Division or you may contact the Hays County Crime Stoppers at 1-800-324-TIPS (8477). Remember, you may also submit information electronically from the link on the Hays County Crime Stoppers website or by using the free “TipSubmit” application from a smart phone. Information leading to the arrest and indictment of criminal suspect(s) may be eligible for a CASH reward of up to $1,000. All calls are confidential and callers will remain anonymous. You do not have to give your name and you will not have to testify in court.