Guards keep eternal watch over Tomb of the Unknowns

Tomb guards maintain a constant vigil day and night, in rain, sleet and snow, to ensure the Unknowns will forever rest with dignity and honor.

ARLINGTON, Va. - Perched atop a hill overlooking the nation’s capital, the Tomb of the Unknown Soldier at Arlington National Cemetery is a monument honoring the brave U.S. service members throughout history whose remains have not been identified.

The iconic memorial has been continuously guarded 24 hours a day since 1937 and depicts three carved Greek figures representing peace, victory and valor on its marble stone. Inscribed on the back of the tomb are the words: “Here rests in honored glory an American soldier known but to God.”

The monument, which welcomes thousands of visitors each year, is the final resting place for Unknowns of World War I, World War II and the Korean War.

Tomb guards, who are members of the 3rd U.S. Infantry known as the “Old Guard,” maintain a constant vigil day and night at the monument to ensure the Unknowns will forever rest with dignity and honor. 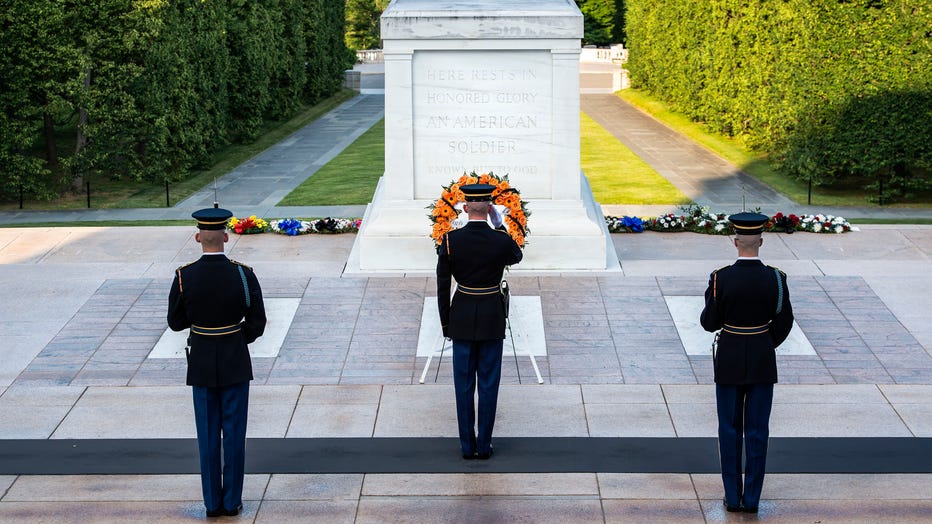 A file image shows the changing of the guards at the Tomb of the Unknown Soldier on Jan. 6, 2013 at Arlington National Cemetery in in Arlington, Virginia. (Photo by John Greim/LightRocket via Getty Images)

“There are families out there that will never have closure,” said Sentinel Spc. Preston Millison, 3rd U.S. Infantry Regiment (The Old Guard), who has conducted more than 600 walks guarding the tomb. “That soldier has gave absolutely everything, and there is nothing more for him to give.”

The monument’s history dates back to 1921, when Congress approved the burial of an unidentified American soldier from World War I in the plaza of Arlington National Cemetery's new Memorial Amphitheater. The WWI “Unknown” arrived in Washington, D.C. in November of that year and lay in state at the Capitol Rotunda — with thousands of visitors lining up to pay their respects, according to Arlington National Cemetery's website.

The casket was then transported to the Memorial Amphitheater, where President Warren G. Harding placed the Medal of Honor and Distinguished Service Cross on the casket, and foreign dignitaries added more medals.

It was eventually lowered into the crypt. A bugler played “Taps," followed by the battery firing a 21-gun salute, and "the Unknown Soldier was home," the cemetery’s website reads.

Many people visited Arlington National Cemetery in the following years to pay their respects at the Tomb of the Unknown Soldier, which soon came to symbolize the sacrifices of all U.S. service members.

And while many respectful mourners flocked to the tomb, so did tourists who left trash strewn around the site, as well as photographers who set up shop at the tomb and charged people to take their picture, according to Arlington National Cemetery.

This led Congress to establish a military guard to protect the tomb. And since July 2, 1937, those interred at the Tomb of the Unknown Soldier, also known as Tomb of the Unknowns, have never been alone. Sentinels of the 3rd U.S. Infantry later assumed these duties in 1948 — maintaining a constant watch regardless of weather conditions.

Millison, who holds badge number 633 and conducted his last walk in 2016, said the monument helps visitors walk away with “a new meaning of what it means to have sacrifice and dedication to something greater than one’s self.”

“When you come here and you watch the tomb guards and you see the surrounding cemetery, the sea of white headstones, it really brings home a higher understanding of what your role is in this country and how fortunate you are to be in this country,” said Millison.

Working 26-hour shifts that begin around 4 a.m., Millison described it as “one of the most serious jobs you can have.”

The tomb guards are perfectionists, polishing their shoes and conducting other duties like clockwork.

“It’s just like a band of brothers,” Millison said. “Everybody’s got each other’s back, no matter what.”

Today, the sarcophagus built above the tomb of the soldier who served in WWI sits in front of the three marble slabs that identify the crypts of the soldiers from WWII and Korea, as well as all missing U.S. service members from the Vietnam War.

The sentinels not only guard the Unknown Soldiers, but also everything around the nation’s most hallowed ground.

“You really see the sacrifices that have been made for this country,” Millison said. “You can go anywhere in this cemetery and there are people interred here from all the wars from America’s history.”

Millison said the job makes every tomb sentinel “hit their wall,” but those who are able to keep going have what it takes to stand guard.

“I hit my wall three times,” Millison said. “But each time I just tried to pick up the pieces and keep going because in the end it’s worth it.”