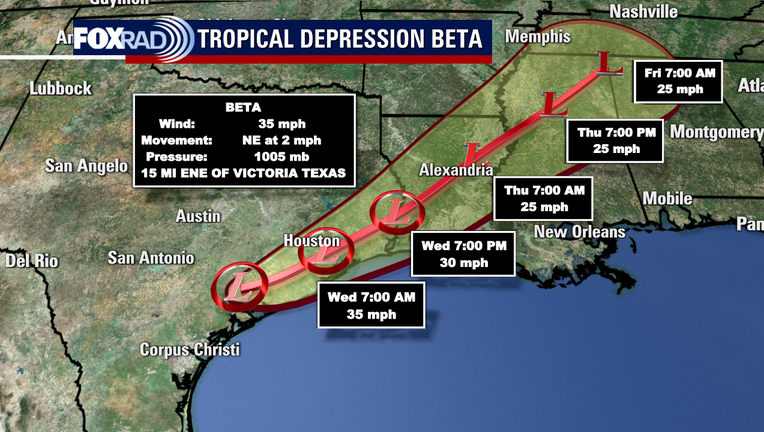 HOUSTON - Beta weakened to a tropical depression on Tuesday, about 12 hours after making landfall along the Texas coast.

Beta made landfall around 10 p.m. near the southern end of the Matagorda Bay Peninsula with maximum sustained winds at 45 mph.

At 10 a.m. Tuesday, the National Hurricane Center said Beta had weakened to a tropical depression with maximum sustained winds at 30 mph.

Beta is located about 15 miles east-northeast of Victoria and 30 miles west-northwest of Palacios.

The movement is now toward the northeast at 2 mph. As Beta has now turned, it will slowly ride along the Texas coastline, likely staying inland as the rain bands associated with Beta continue to bring heavy rain over parts of Texas.

The center of Beta is forecast to be over or near Houston by Wednesday morning before lifting out of the area later that afternoon.

On the current forecast track, Beta will then move over Louisiana and Mississippi Wednesday night through Friday.

Conditions from Beta at the Galveston seawall

"Tropical Depression Beta poses serious flood risks to communities along the coast and Southeast Texas, and I urge Texans to remain vigilant as this storm continues to impact our state," said Governor Abbott. "Texans who live in areas at risk for flooding should not travel if possible, avoid crossing flooded roadways, and continue to heed the guidance of local officials as this storm makes its way through the Lone Star State."

The governor said the Texas State Operations Center remains activated at Level 2 to support requests for assistance from local officials.

Flooded roadways in the Houston area due to Tropical Storm Beta

A look at some of Houston's flooded roadways Tuesday morning

Heavy rains have left some Houston area roadways flooded. Dozens of high water locations have been reported on area roadways. On Tuesday morning, Houston leaders urged the public to avoid driving if possible and reminded drivers not to cross flooded roadways or go around barricades.

“We want to remind people, we even have a slogan that rhymes, turn around, don’t drown. We’ve mentioned this before. It’s not just a slogan, it is going to save lives,” Chief Pena said. “As I mentioned, over 60 rescues and evacuations, they’ve all been street level flooding as a result of people trying to drive through flooded streets.”

FOX 26 is continuing to update a list of high water locations as they are reported. Check the list here.

Houston Mayor Sylvester Turner, Fire Chief Samuel Pena, Police Chief Art Acevedo and other city leaders hold a press conference to provide an update on weather conditions in the city as Beta moves through the area.

Some Houston-area school districts have canceled classes, while others have opted for online-only instruction on Tuesday. 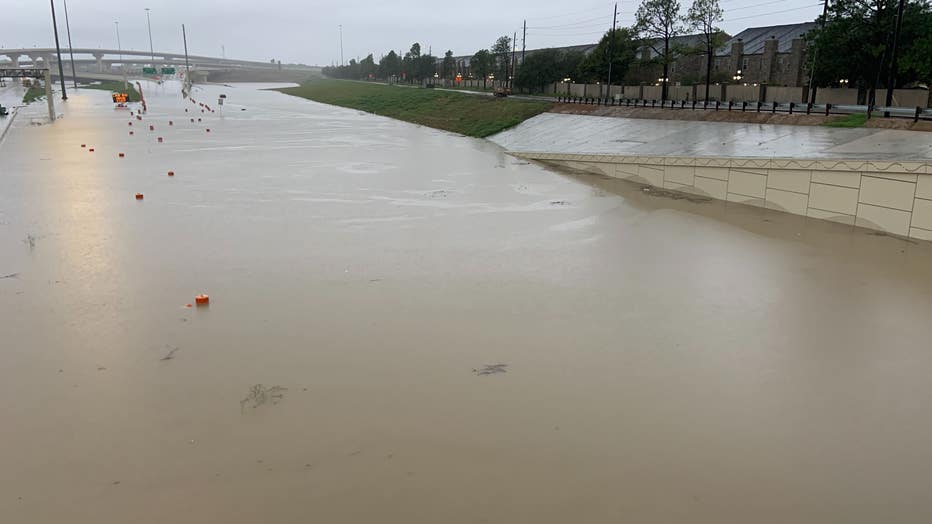 Street flooding was seen at 288 and Holly Hall in Houston on Tuesday morning.

What’s in a (tropical) name, anyway?

The name ‘Wilfred’ was last on the list for Atlantic storm names for the 2020 season, completing the English alphabet where nearly all letters are assigned a corresponding name. The only letters left out the naming process are Q, U, X, Y, and Z.

So what’s in a name anyway? The World Meteorological Organization (WMO) is in charge of naming tropical cyclones all over the globe. The practice of naming tropical cyclones began since it seemed easier to identify storm-systems in tropics. According to the WMO’s website, ‘Experience shows that the use of short, distinctive given names in written as well as spoken communications is quicker and less subject to error than the older more cumbersome latitude-longitude identification methods.”

Since 1953, Atlantic tropical cyclones have been named from lists originated by the National Hurricane Center. Those names are now controlled and updated by an international committee of the WMO. Interesting to note, the original name lists were only female names. Male names were introduced in 1979 and they now alternate with the female names. According to the WMO, six lists are used in rotation, thus the 2020 list will be used again in 2026 unless a name is retired.

It is often the case that a particular tropical cyclone is exceptionally damaging or costly, in which case the WMO reserves the right to retire a name. This is done simply because the WMO believes it would be ‘inappropriate for reasons of sensitivity.’ Names such as Harvey, Rita, Ike, Maria, and Sandy have all been retired. These infamous names will go down in history due to their impact on human life and property.

Now that we have exhausted the names associated with the English alphabet, we go Greek. We’re not totally in uncharted territory, though. In 2005, we saw six storms assigned to their respective Greek-letter so the question remains how deep into the Greek alphabet will we go. The Atlantic Hurricane Season doesn’t officially end until November 30 so we still have plenty of time to see more named-storms.

MORE INFO: What happens if we run out of hurricane names?