President Biden, in his first address to a joint session of Congress Wednesday night, laid out his vision for America.

WASHINGTON - On Thursday, 100 days will have gone by since President Joe Biden took the oath of office.

Presidents usually mark the milestone by touting accomplishments and promises kept during their first three months. It’s a tradition started by President Franklin D. Roosevelt, who famously helped the banking industry during the Great Depression and laid the groundwork for the New Deal within 100 days.

Though it is a self-imposed milestone with no real consequence, Biden is likely to take a victory lap on the many campaign promises he’s been able to keep so far.

FDR achieved much of his success by signing a whopping 76 bills into law during that time frame. According to a report by NPR, Biden has only signed 11 so far — the fewest by a Democrat in the last century.

Biden’s predecessor, President Donald Trump, had signed 28 by this point. But just as he vowed to do on the campaign trail, Biden has been hard at work dismantling a lot of the moves Trump made.

With executive action, Biden has rejoined the Paris climate agreement, reversed a ban on transgender people in the military and stopped the U.S. from departing the World Health Organization. 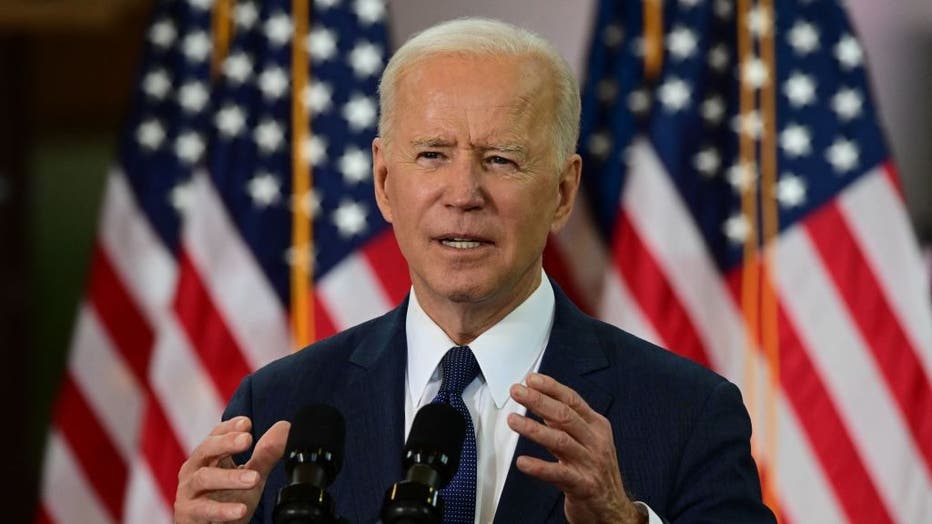 While he lags behind in signing new laws, Biden has signed 42 executive orders — second only to FDR’s 99 orders in 1933.

His slew of executive orders targeted climate change, gun control, immigration, racial equity and many other issues. But he’s likely to be most boastful of the country’s progress in combatting the COVID-19 pandemic.

When he was still the president-elect, Biden vowed his administration would achieve 100 million vaccine injections in his first 100 days. When that goal became too modest in March, Biden upped it to 200 million.

According to the data collected by the U.S. Centers for Disease Control and Prevention (CDC), the administration has achieved more than 232 million injections.

As of April 28, more than 96 million Americans have been fully vaccinated while 141 million have received at least one dose.

Since the Food and Drug Administration authorized two-dose vaccines from Pfizer and Moderna, and later a single-dose shot from Johnson & Johnson, COVID-19 cases in the U.S. have plummeted from the highs seen around Christmas.

Most importantly, the hospitalizations and deaths are down, preventing the healthcare system from being overwhelmed.

The Biden administration maintains Trump failed to leave a plan for rolling out the vaccine, so much of this progress was achieved on the fly.

Biden has always taken a more serious tone with the pandemic than his predecessor. Unlike Trump, who often scoffed at mask mandates and once mocked Biden for wearing a mask, Biden asked Americans to wear masks for the first 100 days of his presidency.

And that expiration nearly coincided with the CDC announcement on Tuesday that relaxed some of its mask requirements for fully vaccinated people.

RELATED: CDC: Fully vaccinated Americans can do some outdoor activities without mask

The pandemic left an enormous impact on the economy, causing widespread layoffs and prompting Congress to issue economic stimulus payments.

In the final days of the Trump presidency, Trump raged against the $600 payment Congress approved, saying the checks should be at least $2,000. Democrats and Biden agreed. Biden pounced on that as an opportunity to persuade Georgia voters to give Democrats a majority in the Senate.

Biden promised to increase that payment to $2,000 if Georgians elected Jon Ossof and Raphael Warnock in January’s runoff elections.

When they did, and the second Trump impeachment trial concluded, Congress passed another round of stimulus payments, which Biden signed into law on March 11 — sending an additional $1,400 to Americans.

That 1.9 trillion relief package also included a $300 boost to weekly jobless benefits, expanded the child tax credit up to $3,600 per child and allocated billions of dollars towards helping K-12 students return to the classroom.

A month after signing it, the economy showed its greatest signs of progress in more than a year. The March jobs report showed employers added 916,000 jobs.

RELATED: Hiring ramps up as US adds 916K jobs in March

In April, the weekly unemployment claims reached pandemic lows, plummeting into the 500,000 range.

The number of minors arriving at the border without parents rose so high, Border Patrol had trouble housing them.

Biden promised a more humane approach than the one his predecessor used, but some of the living conditions migrant children are being detained have placed his administration under more scrutiny.

A facility in Donna, Texas reached 1,556% capacity in March with children sleeping on floors, packed into pods. Biden said those conditions are "totally unacceptable" and pledged to move 1,000 of those children to other facilities.

Meanwhile, Republicans have pounced on immigration as a chance to paint Biden as soft on the border. They’ve also targeted his other plans, like raising the federal minimum wage to $15 an hour.

Initially, that was supposed to be a part of his coronavirus relief package. It passed in the original bill voted on by the House. But Senate Republicans successfully argued that a minimum wage hike violated the budget reconciliation method Democrats used to allow the package to skirt the filibuster.

And at the state level, Republicans are passing laws they claim protect the integrity of elections. But Democrats accuse the GOP of using laws to make it harder to vote in the states that Biden flipped to win the presidency.

The new wave of voting laws are based on Trump’s false claims that widespread voter fraud led to Biden’s victory in Georgia, Pennslyvania, Arizona, Michigan and Wisconsin.

Biden’s victory was the result of high turnout by Black voters in cities like Atlanta, Philadelphia, Detroit and Milwaukee. When Gov. Brian Kemp signed Georgia’s bill into law, Biden called it "Jim Crow in the 21st century."

Democrats would hope to render those laws obsolete with the passage of the John Lewis Voting Rights Advancement Act, which would restrict partisan gerrymandering of congressional districts, strike down hurdles to voting and bring transparency to a murky campaign finance system that allows wealthy donors to anonymously bankroll political causes.

With a tally of 220-210, the House passed H.R. 1 last month despite strong Republican opposition. But the bill faces a major hurdle in the 50-50 Senate.

Some legislation needs only 51 votes to pass. But a bitterly partisan bill, like this one, would likely face a filibuster — which takes 60 votes to end. Democrats could circumvent that by abolishing the filibuster, but Biden has been slow to join that persuasion of the Democratic caucus.

Democrats could seek to expand the qualifications for budget reconciliation, but that would require unanimous Democratic support — and Sen. Joe Manchin, D-W.V., has positioned himself as a defender of the filibuster.