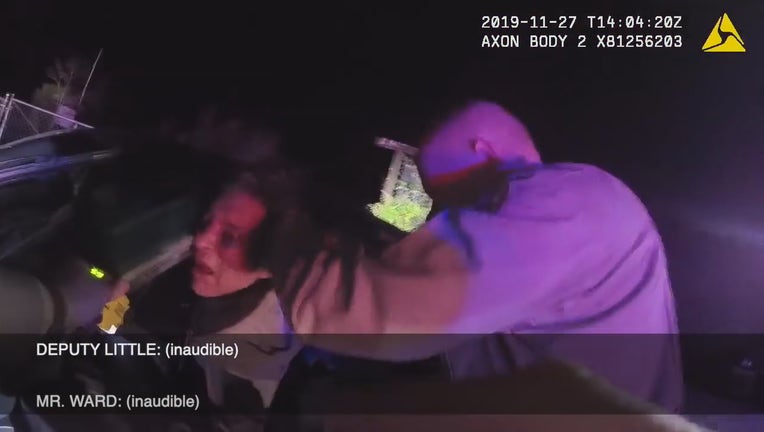 SACRAMENTO, Calif. - Spurred by the slayings of George Floyd and other Black people in police custody across the country, California Gov. Gavin Newsom on Wednesday banned certain chokeholds as he approved several new laws designed to increase oversight of the criminal justice system.

But amid national calls to defund the police, he vetoed a priority bill of reform groups that would have provided state funding for community organizations to take over some police duties in an effort to deescalate confrontations.

Newsom supported the concept of the bill, which passed with near-unanimous bipartisan support, but objected to how it would have been administered.

The veto “is in sharp contrast to his promises to address systemic racism and violence in policing,” said Cat Brooks, co-founder of Anti Police-Terror Project. “Shame on you.”

While she noted that Newsom promised to keep working on the issue with lawmakers next year, “how many lives will we lose between now and then?”

The California bill banning neck holds does not apply to the sort of suffocation that killed Floyd in May in Minneapolis and led to months of protests. Floyd died when a police officer put his knee on Floyd’s neck while he was on the ground.

Still, Assemblyman Mike Gipson said his bill was spurred by Floyd and “many others (who) have cried out, ‘I can’t breathe,’ and law enforcement must now use alternative methods to restrain a suspect instead of these life-threatening holds.”

California’s ban applies to arm-based grips including chokeholds that apply pressure to a person’s windpipe, and to carotid holds, which slow the flow of blood to the brain. The ban on chokeholds and other neck restraints followed an order by Newsom in June discouraging use of the holds.

Under another new law, one that has been years in the making, the state attorney general will be required to investigate fatal police shootings of unarmed civilians.

Newsom acted over the objection of the county sheriffs’ association when he approved a law making it clear that county supervisors can create oversight boards and inspectors general with subpoena powers over independently elected sheriffs.

Attorney General Xavier Becerra opposed versions of the bill giving his office responsibility for investigating fatal shootings by police and blocked similar proposals in previous years, on the grounds that his office lacks the funds or personnel needed to take over from hundreds of local law enforcement agencies. Some critics, meanwhile, said the attorney general’s office is too tied to law enforcement to be completely objective.

Under another new law, suspects may be entitled to new trials or sentences if they can demonstrate that any part of their case, from arrest to sentencing, was tainted by racial bias. Among other things, defendants can try to show with statistics that there are systemic racial disparities in bringing certain charges or that minorities are more likely to be convicted or receive longer sentences.

“This bill gives me hope that one day we will have a justice system that deserves to have justice in its title,” said Zachary Norris, executive director of the Ella Baker Center for Human Rights.

The California District Attorneys Association objected that the law will prompt mistrials or other steps “without any showing that ... the bias has any impact whatsoever on the outcome of the trial, or that the defendant was deprived of a fair trial.”

Newsom also approved a bill allowing judges, starting in 2022, to assess whether lawyers illegally exclude jurors based on their race.

While the governor and advocates hailed the new laws, many more controversial measures died among law enforcement opposition in the closing hours of the legislative session last month. They included proposals to end the careers of officers who commit serious misconduct, release more police misconduct records, require officers to intervene if they see excessive use of force, and limit their use of rubber bullets and tear gas against peaceful protesters.

“I hope people recognize we’re moving in the right direction, and again I just recognize we have a lot more work to do in this space and we are not walking away from that responsibility,” Newsom said, promising renewed efforts next year.

Newsom also signed a bill he sought that will phase out the state’s remaining juvenile prisons, which currently hold about 750 youths, a move that state Sen. Nancy Skinner called “monumental for juvenile justice in California.”

Counties will stop sending juveniles to state lockups after July 1. The state will instead create an Office of Youth and Community Restoration and send grants to counties to provide custody and supervision.

Other measures approved by the governor:

— Require law enforcement agencies to evaluate officers for any bias based on race, ethnicity, gender, nationality, religion, disability or sexual orientation. Recruiting materials would “deemphasize the paramilitary aspects of the job and place more emphasis on community interaction.”

— Limit probation terms to no longer than two years for a felony conviction and one year for a misdemeanor conviction. But he vetoed a separate bill that would have allowed parolees to reduce the length of their supervision by completing rehabilitation programs, saying the corrections department is working on a similar policy.

— Create a diversion program for misdemeanor offenders and allow felons over 50 who have served at least 20 years behind bars to apply for an elderly parole program that now involves inmates who are at least 60. The diversion program was opposed by the state prosecutors association and Mothers Against Drunk Driving, and Newsom said he wants an amendment next year excluding people convicted of driving while intoxicated.

— Bars law enforcement officials from wearing military-style uniforms that can make it difficult for civilians to distinguish officers from members of the National Guard.

He also vetoed several bills, including measures that would have:

— Required law enforcement agencies to notify the state whenever an officer is fired, saying it might derail efforts to permanently take away their badges.

— Created a new California Reentry Commission within the state corrections department to help inmates with health and safety issues. He said that could duplicat e other efforts.

— Barred police from interfering with journalists ’ ability to go behind police lines during demonstrations. He said the broad definition of journalist could have created a security risk.