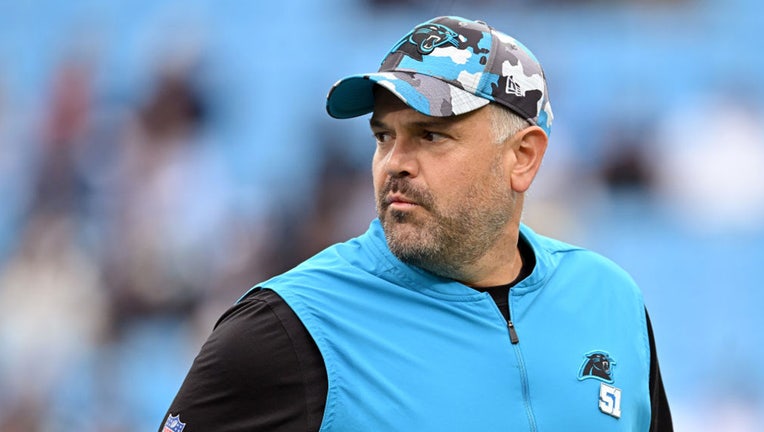 FILE - Former head coach Matt Rhule of the Carolina Panthers watches his team warm up during their game against the Arizona Cardinals at Bank of America Stadium on Oct. 02, 2022, in Charlotte, North Carolina. (Grant Halverson/Getty Images)

Rhule, the first NFL coach to be fired this season, went 11-27 with Carolina. The Panthers fell to 1-4 with Sunday’s 37-15 home loss to San Francisco as 49ers fans made Bank of America Stadium their East Coast home.

Defensive pass game coordinator and secondary coach Steve Wilks will serve as interim coach for the rest of the season. The 53-year-old Wilks spent one year as Arizona’s coach in 2018, going 3-13.

Rhule did not immediately respond to voice and text messages on Monday.

The 47-year-old Rhule was lured away from Baylor with a seven-year, guaranteed $62 million contract by David Tepper, the second-wealthiest owner in the NFL.

Tepper was initially patient with Rhule following Sunday's loss, but grew increasingly agitated and changed his mind on Monday.

The Panthers hoped Rhule could turn things around in his third year as he did at Baylor and at Temple before that. The team had constant turnover at quarterback under Rhule, with Teddy Bridgewater as the starter in 2020 and Sam Darnold and Cam Newton getting starts last year.

The Panthers traded for Baker Mayfield this offseason. But the 2018 No. 1 overall draft pick has been awful, ranking last in the NFL in ESPN’s total quarterback rating. Mayfield has completed 54.9% of his passes and is averaging fewer than 200 yards passing per game with four touchdowns and four interceptions.

The poor play at the game's most important position put unsustainable pressure on Carolina's defense. Under Rhule, the Panthers were 1-27 when allowing an opponent to score 17 or more points.

Mayfield injured his ankle in the loss to San Francisco and was in a walking boot after the game. It’s unclear if he will miss any time.

Mayfield was one of several players who spoke out in support of Rhule.

"We’re fine in the locker room when it comes to that," Mayfield said. "There are a lot of plays that we just have to flat-out make — and he can’t do that. He can’t go make plays for us. He can’t do the execution for us."

This marks the second time in four years Tepper has fired a coach during the season. He let go of Ron Rivera, the winningest coach in franchise history, with four games left in 2019 with the Panthers at 5-7.

The Panthers have not been to the playoffs since 2017 -- the year before Tepper took over -- and have not won a playoff game since winning the NFC championship in 2015 to reach the franchise’s second Super Bowl.

Wilks becomes the second Black coach to lead the Panthers. The other, Perry Fewell, served as interim coach after Rivera was fired and went 0-4.

Wilks joined Brian Flores' lawsuit in April, alleging racist hiring practices by the NFL when there are vacancies for coaches and general managers. Wilks joined the lawsuit along with Ray Horton.

The lawsuit alleges that Wilks was discriminated against by the Cardinals in 2018 when he was hired as a "bridge coach" but was given no meaningful chance to succeed.