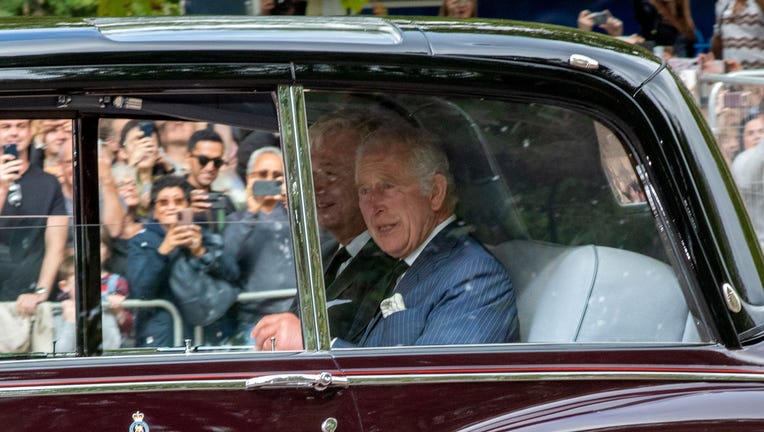 LONDON - Two days after his mother's death elevated him to the throne, King Charles III was officially proclaimed Britain’s monarch Saturday in a pomp-filled ceremony steeped in ancient tradition and political symbolism — and, for the first time, broadcast live on television and online.

Charles, who spent seven decades as heir apparent, automatically became king when his mother, Queen Elizabeth II, died Thursday. But the accession ceremony was a key constitutional and ceremonial step in introducing the new monarch to the country, a relic of a time before mass communications.

"I am deeply aware of this great inheritance and of the duties and heavy responsibilities of sovereignty which have now passed to me," he said as he took on the duties of monarch.

Hours after the ceremony, Prince Harry and his wife, Meghan, the Duchess of Sussex, later joined Prince William and Princess Kate at Windsor Castle to view the sea of floral tributes left by the public in honor of the princes’ grandmother. It was the two couples’ first public appearance since the queen’s death. The princes and their wives were seen shaking hands and speaking with members of the public.

Their "walkabout," the first time the brothers have appeared amicably together in public since March 2020, comes at a time when the younger generation of Britain's royal family must step up their responsibilities significantly.

William, long second-in-line to the throne, is now the heir apparent after his father, King Charles III, became Britain's new monarch upon his mother's death. That means William and Kate, both 40 and parents of three young children, immediately assume a much more central role as the new face of the monarchy.

Britain's Catherine, Princess of Wales (R) and Britain's Prince William, Prince of Wales (C), chat with well-wishers on the Long walk at Windsor Castle on September 10, 2022, (Photo by CHRIS JACKSON/POOL/AFP via Getty Images)

William and Harry had been on frosty terms terms since Harry quit as a senior royal and moved to the U.S. two years ago. Their show of unity Saturday was reportedly initiated by William and left some observers hoping that Harry, 37, might return to the fray and support his elder brother in sharing the heavy workload now on William’s shoulders.

Queen Elizabeth to lie in state 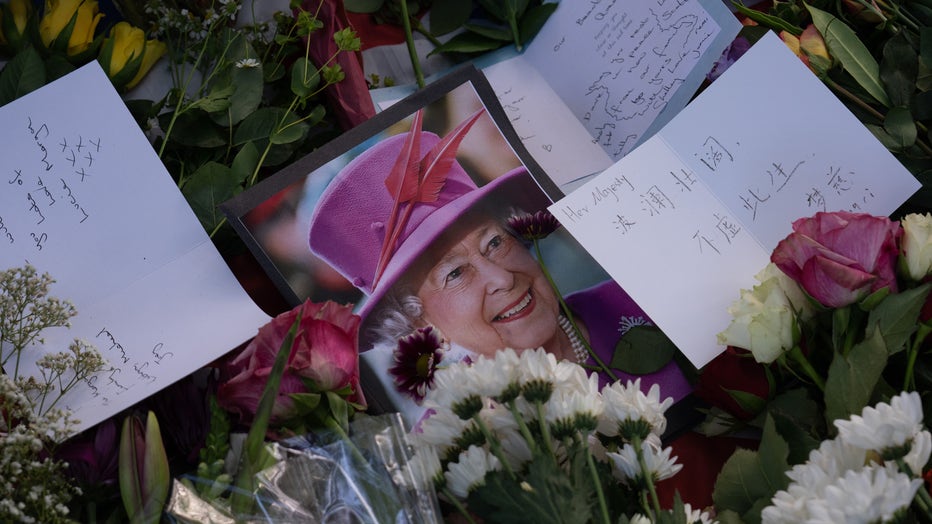 A photograph of Queen Elizabeth II is laid among flowers and other tributes in Green Park on September 10, 2022 in London, United Kingdom. (Photo by Carl Court/Getty Images)

Queen Elizabeth II will lie in state starting Wednesday for four days at the House of Parliament, palace officials said, after her body is brought from Balmoral, first to Edinburgh and then to London. The state funeral will take place on Sept. 19 at Westminster Abbey.

Organizers described the ceremony as a "a fitting farewell to one of the defining figures of our times.’’

The palace made the announcement hours after the first accession ceremony since 1952, when Queen Elizabeth II took the throne.

New Prime Minister Liz Truss and five of her predecessors were among scores of senior current and former British politicians who gathered in the ornate state apartments at St. James’s Palace for the meeting of the Accession Council.

They met without Charles, officially confirming his title, King Charles III. The king then joined them, vowing to follow his mother’s "inspiring example" as he took on the duties of monarch.

"I know how deeply you and the entire nation, and I think I may say the whole world, sympathize with me in this irreparable loss we have all suffered," he said in speaking of his own grief.

The new king formally approved a series of orders, including one declaring the day of his mother's funeral a public holiday.

READ MORE: Death of Queen Elizabeth II: What could change in the months ahead as Charles becomes king

Charles was accompanied at the ceremony by wife Camilla, the Queen Consort, and eldest son Prince William. 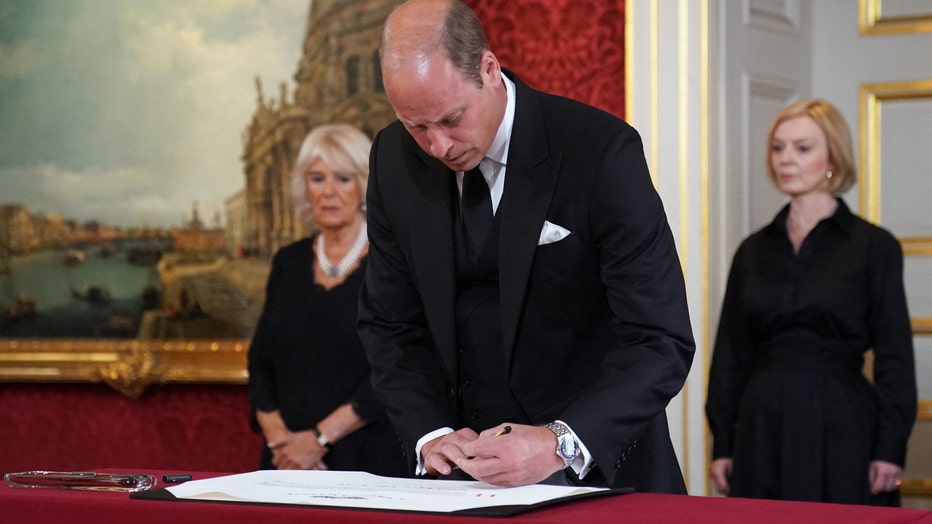 Saturday's accession ceremony ended with a royal official publicly proclaiming King Charles III the monarch from a balcony at the palace. In centuries past, this would have been the first official confirmation the public had of their new sovereign.

David White, the Garter King of Arms, made the proclamation flanked by trumpeters in gold-trimmed robes before leading cheers — "hip, hip, hooray!" — for the new king.

Gun salutes rang out in Hyde Park, at the Tower of London and at military sites around the U.K. as he announced the news, and scarlet-robed soldiers in the palace courtyard doffed their bearskin hats in a royal salute.

The proclamation was read at other locations across the U.K., including the medieval City of London.

Two days after the 96-year-old queen died at Balmoral Castle in Scotland following an unprecedented 70 years on the throne, people still came by the thousands to pay their respects outside Buckingham Palace in London. The scene was repeated at other royal residences across the U.K. and at British embassies around the world. 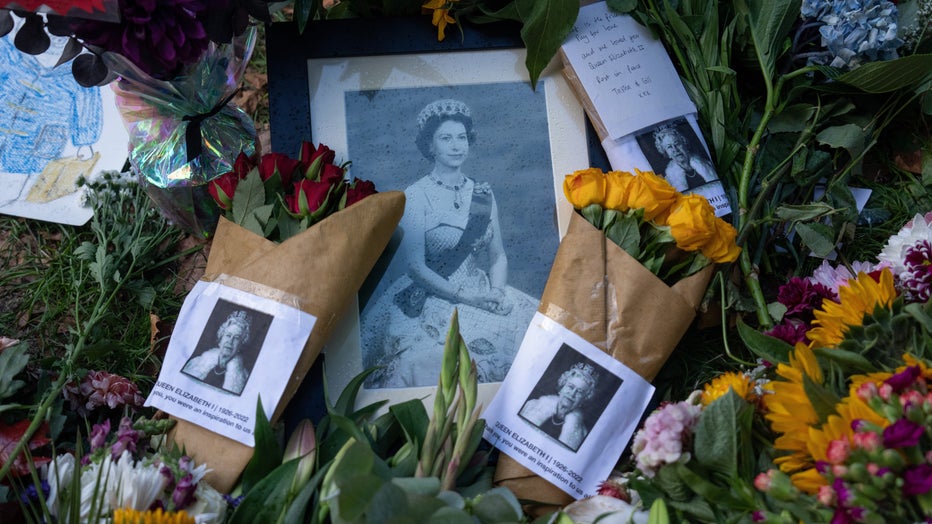 A portrait of Queen Elizabeth II is laid among flowers and other tributes in Green Park on September 10, 2022 in London, United Kingdom. (Photo by Carl Court/Getty Images)

For many Britons, her passing, though long expected, is a destabilizing experience. Queen Elizabeth II is the only monarch most have ever known, and her death comes as many Britons are facing an energy crisis, the soaring cost of living, the uncertainties of the war in Ukraine and the fallout from Brexit.

The country has also just seen a change of leader. Truss was appointed by the queen on Tuesday, just two days before the monarch died. On Saturday, Truss and other senior U.K. lawmakers lined up in the House of Commons to take an oath of loyalty to the new king.

Normal parliamentary business has been suspended during a period of mourning for the queen. The House of Commons was holding a rare Saturday session so lawmakers could pay tribute to the late monarch.

Charles struck a note of continuity Friday, vowing in a televised address to carry on the queen’s "lifelong service," with his own modernizing stamp. 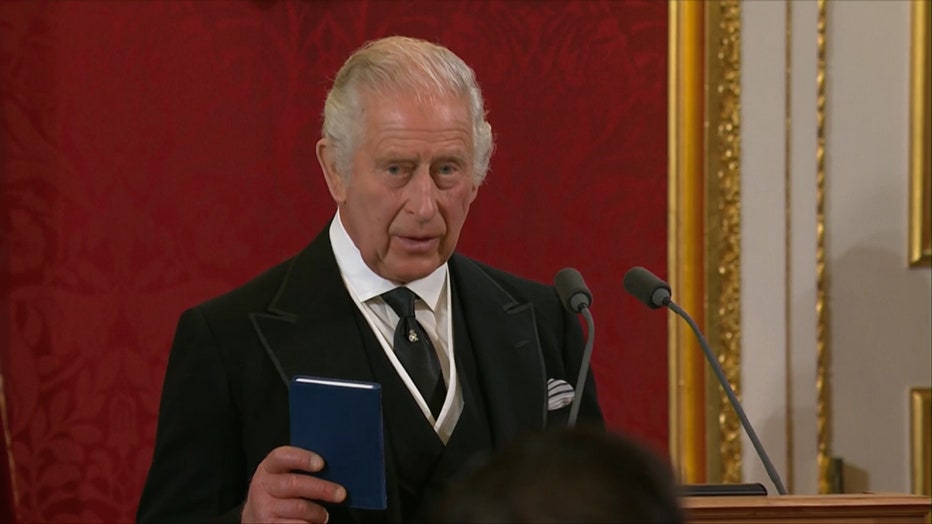 The new monarch looked to both the past — noting his mother’s unwavering "dedication and devotion as sovereign" — and the future, seeking to strike a reassuring note of constancy while signaling that his will be a 21st-century monarchy.

He reflected on how the country had changed dramatically during the queen’s reign into a society "of many cultures and many faiths," and pledged to serve people in Britain and the 14 other countries where he is king "whatever may be your background or beliefs."

He also tried to overcome a reputation for aloofness in his first hours as monarch, spending time shaking hands with some of the thousands who came to leave flowers and pay tribute to the queen at the gates of Buckingham Palace. He was greeted with shouts of "Well done, Charlie!" and "God save the king!" One woman gave him a kiss on the cheek.