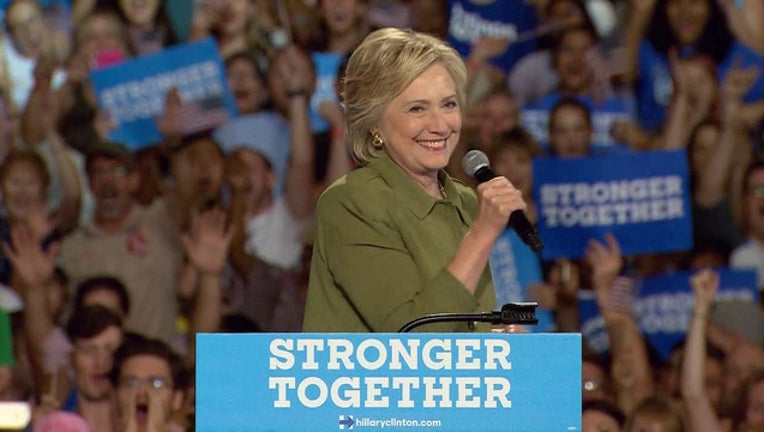 WASHINGTON (AP) — Hillary Clinton's campaign is scrambling to head off lasting damage from her brutal weekend. Aides are promising to release more of her medical records following her bout of pneumonia and conceding they were too slow in providing information about her condition.

Democrats said Monday that Clinton's health incident alone is unlikely to fundamentally alter the presidential race, but some also said it adds to a growing sense of uncertainty less than two months from Election Day. For many supporters, Clinton's battle with Republican Donald Trump is worryingly close, raising concerns not only about holding the White House but also retaking control of the Senate.

"If you look at the way the last couple months have gone, it feels like the race should be further apart," said Greg Haas, an Ohio-based Democratic strategist and former county party chairman.

Aaron Regunberg, a Democratic state representative from Rhode Island, said he was "surprised and concerned" that the race is so tight.

"I still think that we are likely to win, but I think anyone who's not concerned about a bigoted, KKK-endorsed sociopath being this close right now in the polls is not living in reality," Regunberg said of Trump.

Clinton abruptly left a 9/11 anniversary event Sunday in New York and was seen on video stumbling and being held up by aides. After roughly 90 minutes of silence from her campaign, aides said Clinton left because she was overheated. Several hours later, her doctor acknowledged she had been diagnosed with pneumonia two days earlier.

"In retrospect, we could have handled it better," Clinton spokesman Brian Fallon said Monday. He pledged to release "additional medical information" about Clinton in the next few days.

Clinton spent Monday at her home in Chappaqua, New York, after canceling a fundraising trip in California. It was unclear when she planned to return to the campaign trail.

Trump, who is also promising to release new medical records this week, showed surprising restraint regarding Clinton's health. He wished her well and did not repeat questions he has previously raised about whether the former secretary of state has the strength and stamina to be president.

He did hammer Clinton for her assertion Friday night that half of his supporters belong in a "basket of deplorables" and are racist, sexist, homophobic or xenophobic. Clinton later said she regretted applying that description to "half" of Trump's backers, but stuck by her assertion that the GOP nominee has given a platform to "hateful views and voices."

Speaking in Maryland Monday, Trump said he was shocked to hear Clinton "attack, slander, smear and demean these wonderful, amazing people who are supporting our campaign."

After a staff shake-up in August, Trump has largely abandoned the free-wheeling style of campaigning that energized his supporters but also led to an endless string of controversial comments about women, minorities and others. The Republican nominee's newfound ability to stay on script has coincided with tightening in both national polls and surveys in some key swing states.

Democrats are also warily watching a Senate landscape that looked to be favorable for the party if Trump proved to be a drag on GOP candidates. But Rob Portman in Ohio has distanced himself from Trump and appears headed for re-election, and Republicans are also feeling more confident in Florida since Marco Rubio reversed course and decided to run for re-election.

"The last few days feed into a sense of uncertainty," said Chris Kofinis, a Democratic strategist. He said Clinton's rough weekend raises the stakes for the first presidential debate on Sept. 26, which "will either finish Trump or, if he does well, it will create a race."

Privately, some Republicans say Trump would likely be losing more convincingly to another Democratic nominee. But Clinton's unpopularity rivals that of her opponent, and she's been unable to do much to change the minds of Americans who believe she is dishonest and secretive.

Indeed, some Democrats said it wasn't Clinton's pneumonia diagnosis or even the jarring video of her stumbling into a van that leaves them nervous. It was her campaign's unwillingness to quickly level with the public about the situation.

"Antibiotics can take care of pneumonia," David Axelrod, a longtime adviser to President Barack Obama, wrote on Twitter. "What's the cure for an unhealthy penchant for privacy that repeatedly creates unnecessary problems?"

To be sure, Clinton continues to have numerous advantages over Trump as the race presses into its final weeks.

Polls show Trump struggling mightily with big swaths of the electorate, including women, blacks, Hispanics and young people. His path to the 270 Electoral College votes needed to win in November is also narrow — he likely needs to carry Ohio, Florida, Pennsylvania and North Carolina — while Clinton has numerous routes. Clinton's campaign is also running a sophisticated voter targeting and turnout operation, led by several people involved in Obama's winning campaigns, while Trump is banking on the Republican National Committee for his field operations.

Given those built in advantages and Trump's weaknesses, some Democrats say their biggest fear is complacency — making the tightening of the race not such a bad development.

"It really says to me and other supporters of Hillary that we have to be invested, and we're going to have to get out and work," said Missouri state Rep. Margo McNeil of suburban St. Louis, who was a Clinton delegate to the Democratic National Convention.