HOUSTON - It's been nearly a week since Everett Briscoe, a 13-year-veteran with the New Orleans PD was killed in Houston.

The officer was dining with a group of friends outside Grotto Ristorante, a popular restaurant in the Galleria area last Saturday. Investigators said two unidentified men came to the restaurant with guns drawn to rob the group but shot two people, one of them was officer Briscoe, who sadly succumbed to his injuries.

The shooters then fled the scene shortly after the attack, but HPD Chief Troy Finner and other city leaders vowed they would be caught.

And during a press conference Friday, the chief, Mayor Sylvester Turner, and Harris County District Attorney Kim Ogg announced the two suspects were arrested and charged with capital murder. 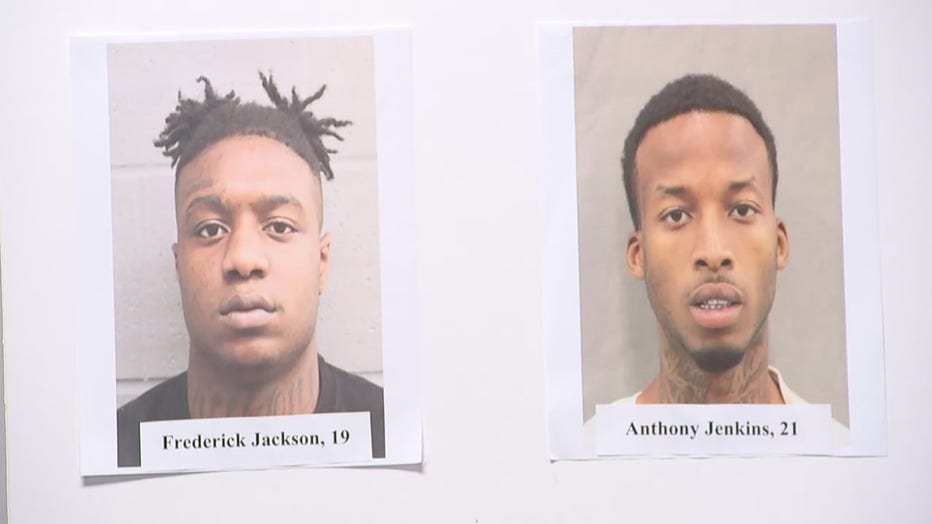 "We're sickened by this bold attack, which left one beloved detective dead and another good friend of his still fighting for his life," Ogg said. "Our city is shaken on how this could happen on a weekend afternoon at a restaraunt in the heart of our tourist area and the Galleria-area community."

On Wednesday, Chief Finner says one of the suspects was arrested Anthony Jenkins, 21, at his apartment, and a car matching the one that drove away from the scene was seized as well. The next day, Frederick Johnson, 19, the second suspect was taken into custody.

"This is what happens, and this is what we talk about: when the community and police officers come together," he said. "And not only this homicide, but all homicides in our city."

According to the district attorney, both suspects were reportedly out on bonds, but are working to ensure they do not face a bond this time. Additionally, Ogg says the suspects could face the death penalty as Capital Murder is one of the highest crimes a suspect can be given.

"Death is on the table," Ogg explained.

Officials were unable to disclose more information on what led up to Briscoe's death but were said to have specifically targeted random individuals in the Galleria area to rob them. And on that Saturday, it appears to have been an aggravated robbery that turned sideways.

DA Ogg said there is a third suspect still at large, however, they are looking to capture soon and ensure justice is served.