A reporter asked the president about what he thinks of QAnon, a convoluted, right-wing, pro-Trump conspiracy Theory, to which Trump replied that he appreciates that the movement supports him.

The company said Tuesday that it will remove Facebook pages, groups and Instagram accounts for “representing QAnon” — even if they don’t promote violence. The social network said it will consider a variety of factors to decide if a group meets its criteria for a ban, including its name, the biography or “about” section of the page, and discussions within the page, group or Instagram account.

Mentions of QAnon in a group focused on a different subject won't necessarily lead to a ban, Facebook said. 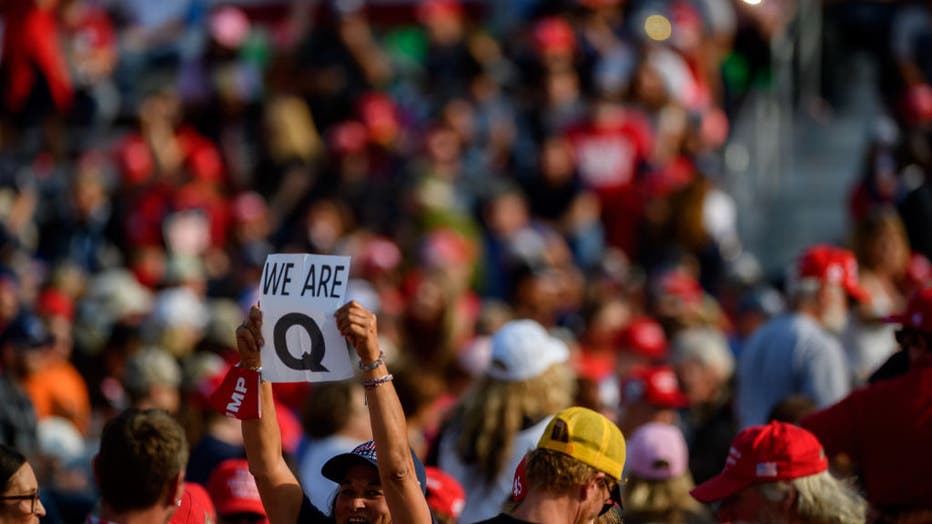 FILE - A woman holds up a QAnon sign to the media as attendees wait for President Donald Trump to speak at a campaign rally at Atlantic Aviation on September 22, 2020 in Moon Township, Pennsylvania.

Less than two months ago, Facebook said it would stop promoting the group and its adherents, although it faltered with spotty enforcement. It said it would only remove QAnon groups if they promote violence. That is no longer the case.

The company said it started to enforce the policy Tuesday but cautioned that it “will take time and will continue in the coming days and weeks.”

The QAnon phenomenon has sprawled across a patchwork of secret Facebook groups, Twitter accounts and YouTube videos in recent years. QAnon has been linked to real-world violence such as criminal reports of kidnapping and dangerous claims that the coronavirus is a hoax.

But the conspiracy theory has also seeped into mainstream politics. Several Republican running for Congress this year are QAnon-friendly.

RELATED: Facebook bans some, but not all, QAnon groups, accounts

By the time Facebook and other social media companies began enforcing — however limited — policies against QAnon, critics said it was largely too late. Reddit, which began banning QAnon groups in 2018, was well ahead, and to date it has largely avoided having a notable QAnon presence on its platform.

Also on Tuesday, Citigroup Inc. reportedly fired a manager in its technology department after an investigation found that he operated a prominent website dedicated to QAnon. According to Bloomberg, Jason Gelinas had been placed on paid leave after he was identified on Sept. 10 by a fact-checking site as the operator of the website QMap.pub and its associated mobile apps.

Citi did not immediately respond to a message for comment on Tuesday.