As a shortage of baby formula continues across the country, Abbott is looking to reopen a plant in Michigan to help with production. FOX Business correspondent Grady Trimble has the details from Sturgis.

As a nationwide infant formula shortage continues, President Joe Biden announced steps Thursday that the federal government will take to try and ease the shortfall.

According to the White House, the government will make it easier for companies to import formula from overseas, push states to crack down on price gouging, and temporarily relax some of the product requirements for WIC users.

The shortage is the result of a variety of factors, including pandemic-related manufacturing and supply chain issues. But it has been exacerbated by a safety recall that followed the deaths of two infants.

Back in February, the Food and Drug Administration warned consumers to avoid some powdered baby formula products from a Sturgis, Michigan, facility run by Abbott Nutrition, which then initiated a voluntary recall. According to findings released in March by federal safety inspectors, Abbott failed to maintain sanitary conditions and procedures at the plant.

Abbott said in a statement that the recall involved four complaints about an environmental bacteria found in infants who consumed formula from the plant. Two infants became sick, while two died.

"After a thorough review of all available data, there is no evidence to link our formulas to these infant illnesses," the company insisted. 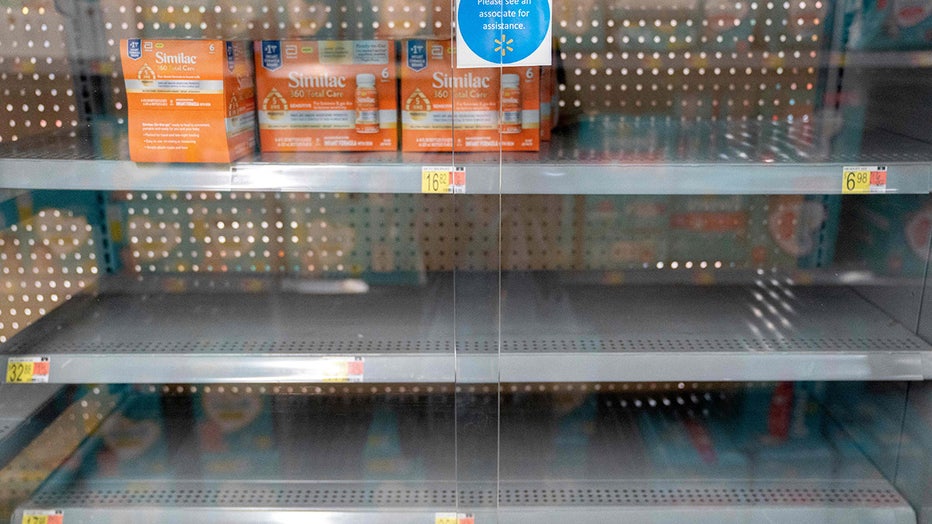 Grocery store shelves where baby formula is typically stocked are locked and nearly empty in Washington, DC, on May 11, 2022. (Photo by STEFANI REYNOLDS/AFP via Getty Images)

Abbott said that pending FDA approval, "we could restart the site within two weeks." The company would begin by first producing EleCare, Alimentum and metabolic formulas and then start production of Similac and other formulas. Once production began, it would take six weeks to eight weeks for the baby formula to be available on shelves.

RELATED: Abbott says it will be at least two months before baby formula from shuttered plant hits shelves

Abbott is the largest manufacturer of infant formula in the country.

According to the White House, the United States normally produces 98 percent of the infant formula it consumes, but until the Abbot plant is back online, the FDA will announce steps to import more formula from countries like Mexico, Chile, Ireland, and the Netherlands.

Baby formula shortage has US parents on edge

The president also discussed with executives from Gerber and Reckitt how they could increase production and how his administration could help, and talked with leaders from Walmart and Target about how to restock shelves and address regional disparities in access to formula, the White House said.

"We recognize that this is certainly a challenge for people across the country, something the president is very focused on and we’re going to do everything we can to cut red tape and take steps to increase supply," White House press secretary Jen Psaki told reporters.

On Tuesday, the FDA said it was working with U.S. manufacturers to increase their output and streamlining paperwork to allow more imports. The agency noted that supply chain issues associated with the pandemic were part of the problem and that consumers bought more baby formula in April than in the month before the recall.

White House press secretary Jen Psaki said this week that the FDA was "working around the clock to address any possible shortages."

This story was reported from Tampa, Fla. The Associated Press contributed.