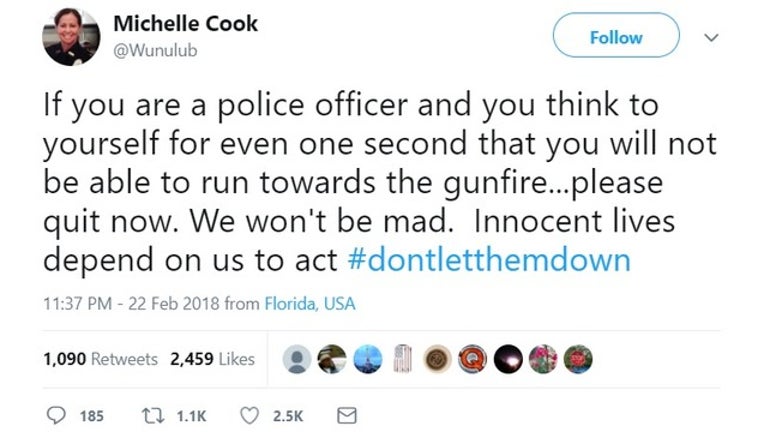 ATLANTIC BEACH, Fla. - A Florida police chief wants to make sure all officers are ready to face whatever comes their way, including an active shooter.

Atlantic Beach Police Chief Michelle Cook posted a comment on Twitter calling on officers to quit if they weren't willing to run toward gunfire.

Chief Cook posted it after learning that a Broward County officer "never went in" to the building at Marjory Stoneman Douglas High School, where 17 students and teachers were killed by a gunman.

Chief cook says all officers should have a gut check and ask themselves how they would respond.

"If you are a police officer and you think to yourself for even one second that you will not be able to run towards the gunfire...please quit now. We won't be mad," she wrote. "Innocent lives depend on us to act #dontletthemdown," she wrote.

Many responded to her Tweet with praise, and another responded that some won't know the answer until they're facing it, but hope they can overcome the fear.

"Each officer needs to look inside and ask if they are mentally prepared to face what we pray will never happen," she wrote, and said everyone should train on shooter response tactics and best practices regularly.

Former Broward Sheriff's deputy Scot Peterson released a statement Monday saying he wasn't a coward, and instead "acted appropriately" during the shooting.

He was put on paid leave and then resigned and retired, the sheriff said.