ORLANDO, Fla. - Florida Agriculture Commissioner Nikki Fried promised a "complete and thorough investigation" into how a 14-year-old teenager fell from the Orlando FreeFall drop tower last week at ICON Park, but also emphasized that her agency would not jump to any conclusions until that investigation was completed, and the report is released.

She also said the agency hired Quest Engineering, a forensic engineering and analysis firm, to help with their investigation into how Tyre Sampson fell to his death while he was on the ride last Thursday, March 24, 2022.

Florida Agriculture Commissioner Nikki Fried held a news conference on Friday to discuss the next steps in the investigation into the death of a teenager on the Orlando FreeFall ride at ICON Park.

"We are fully committed to finding out what happened, so we can better prevent such tragedies from happening in the future – and that’s why we will not be jumping to any conclusions before the information is provided to us, and we know all the facts," she said at a Friday afternoon press conference, which came eight days after Sampson’s death. 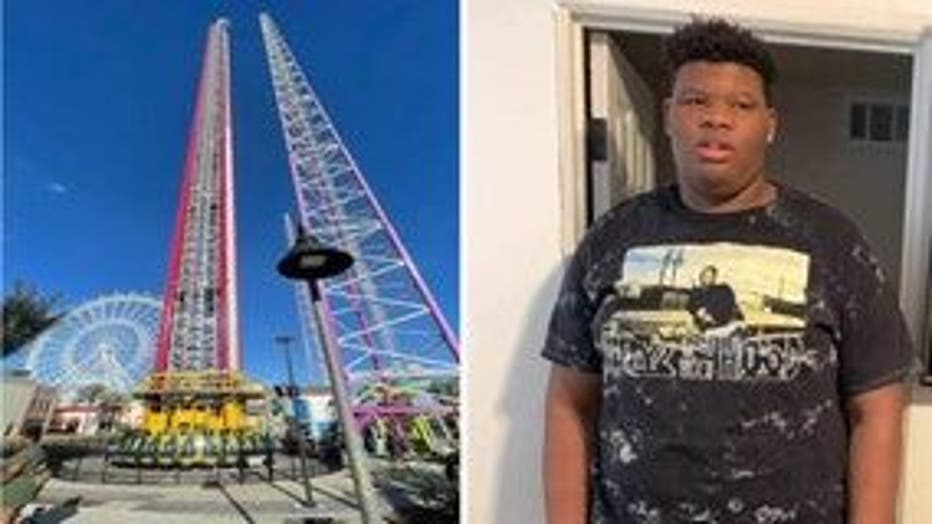 Sampson was visiting Orlando with another family from St. Louis, Missouri, according to his family. Thursday night, he and friends went on Orlando FreeFall, a vertical ride that takes people some 400 feet into the air and then free-falls several hundred feet to the ground.

As the ride was in free-fall and after the magnets engaged, Sampson fell off the ride and onto the ground. He later died at the hospital.

Late Friday, FOX 35 learned that Sampson's mother had hired an attorney and would be filing a joint lawsuit with Sampson's father.

"I think what we’re going to find out is that there’s a number of layers of protection and problems that happened from the design all the way up to 11 p.m. that fateful night," said attorney Michael Haggard. "There’s going to be a lot of issues between international standards and national standards, and obviously the operations of the ride, the prior problems the ride had."

Haggard said he has witnesses who will talk about prior problems with the ride.

"We’ve talked to several witnesses who have been on that ride, complained about the harness that night to several weeks prior," he explained. "It just is unacceptable, and we’ve got to get those answers, so parents can feel safe about their kids going to these places."

FOX 35 News spoke to the attorney representing the mother of Tyre Sampson, the 14-year-old boy who fell to death while riding the Orlando FreeFall.

"When you send your children away for Spring Break or from your hometown, you certainly want them to enjoy the area where they’re traveling, and you expect them to return safely," said Florida Representative Geraldine Thompson, whose district includes Orlando.

She said she’s been in talks with the family’s lawyer and said they are "not interested in so much fixing blame as to fixing the problem."

"I’ll be working with them to fix the problem," which could include legislative action to give the Florida Department of Agriculture and Consumer Services more power, she said. The agency is in charge of inspecting – and approving -- attractions and rides around the state.

FreeFall and Orlando Slingshot, both owned by The Slingshot Group, opened at ICON Park in December 2021. Based on the operations manual that was provided to the state and its inspection, both rides passed their initial inspections with no deficiencies, Commissioner Fried said.

Both rides have been shut down since March 24. The Slingshot Group’s other rides around the state remain open.

"We commend the diligence and thoroughness that Commissioner Fried and the team at the Florida Department of Agriculture have shown as they investigate the operation of the Slingshot Group’s Orlando FreeFall ride."