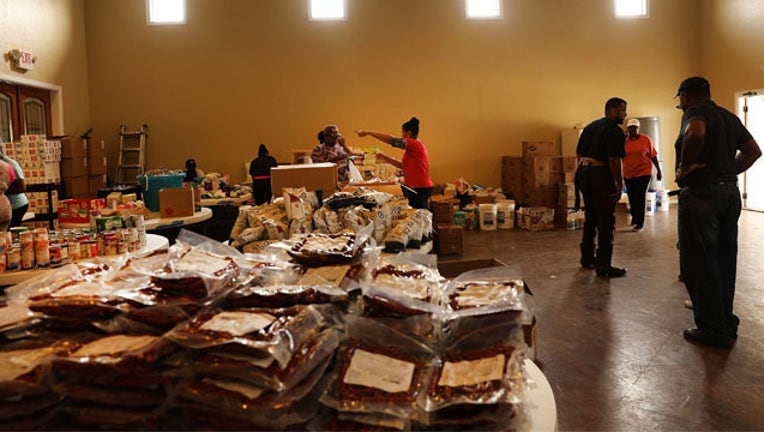 ORANGE, TX: Food is piled on tables at a church that is now a relief center for flood victims in Orange as Texas slowly moves toward recovery from the devastation of Hurricane Harvey. (Photo by Spencer Platt/Getty Images)

HOUSTON (AP) - More than 50 local and national charities have raised more than $350 million in the nearly three weeks since Hurricane Harvey struck the Texas Gulf Coast, and the disparate groups are trying to decide on priorities while some storm victims still await help.

Distrust of large charities such as the American Red Cross has driven many donors to smaller, local organizations. For instance, Houston Texans football star J.J. Watt has raised more than $30 million for his foundation, an effort he started by posting appeals on social media.

One donor to Watt's effort, Helen Vasquez, stood outside the Texans' stadium and said she had seen a Facebook post listing the salaries of executives at top national charities. She gave Watt $20 instead.

But most of the money raised for Harvey has gone to the Red Cross, which has raised a least $211 million. The rest went to other organizations, including 40 groups listed by Charity Navigator, as well as dozens of other groups and individual families raising money on do-it-yourself sites such as GoFundMe.

Turner and Emmett openly urge donors to give to the local fund and not the Red Cross, saying doing so will ensure the best use of the money.

Emmett has blamed the Red Cross for problems that arose with setting up and running the emergency shelters used by tens of thousands of people who were flooded out of their homes.

The Greater Houston Community Foundation, which the men have asked to administer the fund, is creating a 12-member board and a grant committee to set priorities and distribute donations starting in the next several weeks. The foundation is working with the United Way and dozens of other charities, but so far not with the Red Cross or with Watt, who did not respond to questions sent through a spokesman for the Texans.

David Brady, CEO of the Red Cross of the Texas Gulf Coast, said his group would be "happy to be a part of all conversations" and that the Red Cross would review how it could improve its shelter operations in the future.

"We can't take the criticisms personally," he said.

The foundation's CEO, Stephen Maislin, said it will pay the costs of running the Harvey relief fund on its own, including the credit card fees banks charge for donations.

The charities are still weighing the best ways to use the money and setting up systems to monitor where the money goes. Veterans of other major disasters, such as Hurricane Katrina and Superstorm Sandy, say coordination between groups is critical to make the most out of every dollar.

Reese May, national director of recovery for the home rebuilding group SBP, said local leaders need to bridge the gaps between the dozens of groups by setting clear goals.

"When there is aggressive leadership, when there are aggressive goals that are publicly set, it plants the flag," May said. "It gives neighbors the opportunity to connect with one another, saying, 'Absolutely, we're going to make it back from this.'"

Among the most critical needs is figuring out housing for thousands of people who are still living in emergency shelters, many of whom are not eligible for federal assistance. Others lost everything in their homes, and some people are living in gutted homes flooded by sewage because they have nowhere else to go.

The people involved in fundraising say they must move quickly and coordinate with each other.

"I'm praying we can stretch it," said Anna Babin, head of the United Way of Greater Houston, which is already issuing grants to people needing help with rent and lost vehicles and cleaning out flooded homes. "But this is so significant."

As the Texans played their first game of the season Sunday, around 1,900 evacuees were inside the NRG Center, the convention center across the street from the stadium. Thousands of NFL fans were tailgating in nearby parking lots, and smoke from sausages and chicken on the grill rose in the air.

Estella Martin and several other people said they wanted answers from the groups raising money on their behalf.

"They got enough to put every one of the people that are still here in a home or an apartment and help them out until they get up on their feet," Martin said. "Instead, they've got us here."