Houston police confirmed what many hoped was not true. Rapper Takeoff was shot and killed overnight. The Houston police chief spoke candidly, acknowledging the number of shooting deaths in the hip hop industry but he also emphasized the weight of Takeoff's death.

HOUSTON - Police said they have few leads in the fatal shooting of rapper Takeoff outside a private party at a downtown Houston bowling alley.

Takeoff, whose off-stage name was Kirsnick Khari Ball, formed one-third of the Grammy Award-nominated trio Migos with uncle Quavo and cousin Offset from suburban Atlanta. The 28-year-old rapper was killed early Tuesday when gunfire erupted and also wounded another man and a woman, according to police Chief Troy Finner.

Most of the 40 people who attended the party at 810 Billiards & Bowling fled when the gunshots rang out, Finner said. That left police asking people to come forward and give statements and videos to investigators on what they saw and heard, even if anonymously, Mayor Sylvester Turner said.

At least two people discharged firearms, according to Finner. The two others who were struck by gunfire had non-life-threatening wounds and went to hospitals in private vehicles, he said. 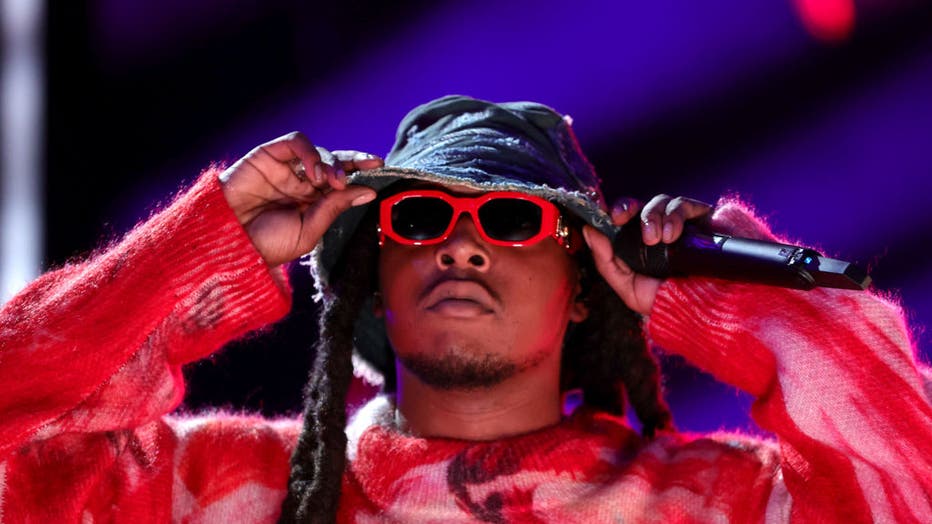 "Let me just ask ... that anyone who has information on the shooter or shooters to provide that information to HPD and let us solve this situation," Turner said at a news conference Tuesday. "Let us bring justice to this family."

Finner said Takeoff was "well respected," and there was "no reason to believe he was involved in anything criminal at the time."

"Senseless violence and a stray bullet has taken another life from this world and we are devastated," the statement said, though police have said nothing about the gunshot being a stray. "Please respect his family and friends as we all continue to process this monumental loss."

The bowling alley is in a three-story Houston retail complex with high-end restaurants and a House of Blues and is near a Four Seasons hotel. Takeoff was pronounced dead at the scene of the 2:30 a.m. shooting. An Associated Press reporter observed a body loaded into a medical examiner’s van around 10 a.m., more than seven hours after the shooting.

Security guards in the area heard the shooting but did not see who did it, a police spokesperson said. A spokesperson for 810 Billiards & Bowling said the shooting took place after the alley closed and said the business is cooperating with investigators.

Atlanta rapper Takeoff, who skyrocketed to fame with his group Migos, was reportedly killed when a fight broke out during a dice game at a Houston bowling alley. Christina 'Ms. Basketball' Granville joins Joanne Feldman with ore on the shocking news.

Several fans gathered across the street from the bowling alley. Isaiah Lopez, 24, said he rushed from his home in the Houston suburb of Humble after hearing Takeoff had been killed.

"He was one of our favorites, mine and my brother’s. It’s all we would listen to," Lopez said as he carried a dozen roses he hoped to place near the site of the shooting. "As soon as my brother called me and said, ‘Takeoff is gone,’ I had to come over here and pay my respects."

Thomas Moreno, 30, lives about five minutes from the bowling alley. He said he met Takeoff at an event at a Houston bar and restaurant in June and called him "a real nice guy."

"I feel it’s just another good person gone too soon," Moreno said. "This happens every day, but it hurts even more when it’s somebody so talented and so young."

By late Tuesday afternoon, fans had created a memorial with roses, candles and a teddy bear on the first floor of the retail complex. Yellow crime scene tape still blocked off stairs leading to 810 Billiards & Bowling.

Takeoff’s killing came as Houston was in a spotlight, with the Astros baseball team mounting the most-viewed World Series run since 2019.

Also, crime has emerged as a major political issue in this year’s midterm elections, with many Republicans running on law-and-order platforms while Democrats try to balance public safety with calls for criminal-justice reform.

Homicides nationwide jumped almost 30% in 2020 during the COVID-19 pandemic. Violent crime seemed to level off somewhat in 2021 but did not drop to pre-pandemic levels, according to the latest FBI crime data, though record-keeping changes meant that report did not include some of the nation’s largest police departments.

In Houston, the mayor and police chief acknowledged such concerns while noting that some violent crime rates are down from last year. Finner said he wants to meet with other hip-hop artists to talk about violence, although he didn’t say Takeoff’s killing had anything to do with is work in music.