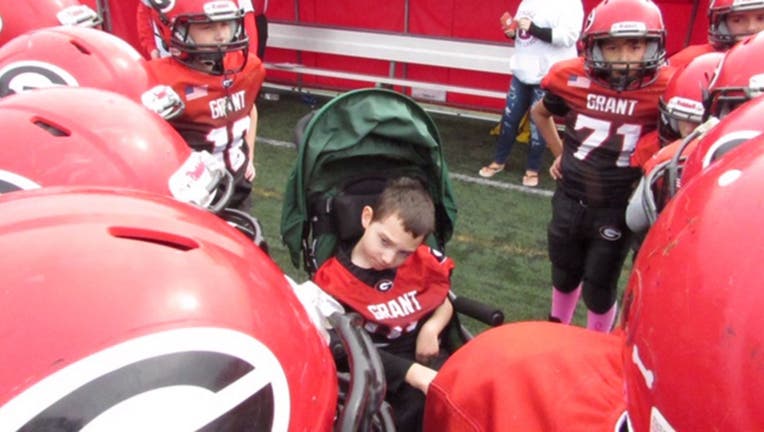 The Grant Jr. Bulldogs youth football team in Fox Lake, Ill., made Bryson Jenkins, who has cerebral palsy, the honorary captain on October 5 and now he is officially considered part of the team, Brittany Jenkins, Bryson’s mother, said. (Brittany Jenk

FOX NEWS - A football team in Illinois made a 7-year-old boy with special needs an honorary captain for a day and even gave him the chance to score a touchdown, the boy’s mother told Fox News on Sunday.

The Grant Jr. Bulldogs youth football team in Fox Lake, Ill., made Bryson Jenkins, who has cerebral palsy, the honorary captain earlier this month and now he is officially considered part of the team, Brittany Jenkins, Bryson’s mother, said.

“They [the coaches] said, ‘Bryson is now permanently on our roster,’” Jenkins told Fox News.

She said when her son was born he suffered a stroke that left him with cerebral palsy and epilepsy. Jenkins said the left side of his body was affected by the stroke and he is nonverbal.

“He just started walking last year with assistance,” she said.

She added, “Instead of being in sports like most little boys, he has spent three to five days a week in therapies and doctor appointments since he was two days old.”

“But no matter what, his life has been very hard, but he has been so determined to do what other kids do.”

Jenkins said even though her son in nonverbal, she can tell he loves football.

“Since he was a baby he would always sit and watch football with my husband and as he got older someone gave him a football as a present and he carries it around the house with him,” she said.

“When he sees that football he gets very excited.”

On October 5, Bryson, of Volo, Ill., which is about an hour from Chicago, wore a custom-made jersey and joined the young football team as their honorary captain. He got to go through the banner with the team as they entered the field. The team then started chanting his name. He also got to do the coin toss and was able to watch the game with his family from the sidelines.

“When we got to the field, the team of boys came over and said 'Hi' to Bryson, gave him high-fives, and they were so warm and welcoming to Bryson even though they had not met him before,” Jenkins said.

She added, “I think the most amazing part of this is, the coaches told us after the game that the boys weren’t told to do any of that. They decided on their own to start chanting Bryson’s name and just be so involved with him.”

Jenkins said the team gave Bryson a football to hold for part of the game. She said with 46 seconds remaining on the clock the team called his number, 85, to the field and, with the help of his father Michael, Bryson scored a touchdown. The crowd went wild.

“It brought me to tears more than one time that day,” Jenkins told Fox News. “First of all, I never imagined he would ever be on a football field, but also because it’s not very often that people are so accepting of him.”

“Most people tend to be very shy around him because they don’t know how to act around someone with special needs.”

Jenkins said her son was invited to be honorary captain after one of the coaches, Danny Gallina, who went to high school with her and her husband, had heard Bryson had cerebral palsy.

“During our warmup in pregame, all the boys took it upon themselves to chant Bryson’s name on their own and then it carried over to the touchdown and the boys chanted his name again and then the entire crowd, the other team, everyone started cheering his name and that was pretty heartwarming and neat to be part of,” Gallina told Fox News.

“I am happy for Bryson and I’m happy for the Jenkins family,” he added.

Jenkins said, “Bryson is nonverbal and we have to tell by his actions [how he feels] and he had a huge smile. He made these excited little screams and he just kept reaching his hands out. He kept touching the boys on the arm and the shoulder, it looked like he was thanking them for, just being so nice. You could tell he felt accepted, he felt included.”

The Grant Jr. Bulldogs youth football didn’t end up winning the game on October 5, but Jenkins said it was still a memorable day for all those involved.

“Everyone was standing and cheering. I’m pretty sure there wasn’t a dry eye there,” she said. “Everyone was crying and both teams came together and circled around Bryson and started jumping up and down, chanting his name.”

Jenkins told Fox News The National Football League Players Association (NFLPA) contacted her last week and told her the organization will be putting together a presentation for Bryson, which will take place on Tuesday and will include at least ten former NFL players who will be presenting him with a plaque and autographed football.

She said Tom Serpento, the executive director of the Chicago chapter of NFLPA, told her he was very touched by the story and Bryson is now considered part of the NFL. Jenkins added that Serpento also wants to recognize the boys for being “so outstanding.”

“We absolutely plan to recognize Bryson and make him an honorary member of the NFL Players Association-Chicago Chapter,” Serpento told Fox News.

“And, equally important, we plan to celebrate and honor the players of The Grant Jr. Bulldogs football team because of their selfless act of kindness to show Bryson acceptance and inclusion. It was that incredibly selfless act that caught our attention and won our hearts.”