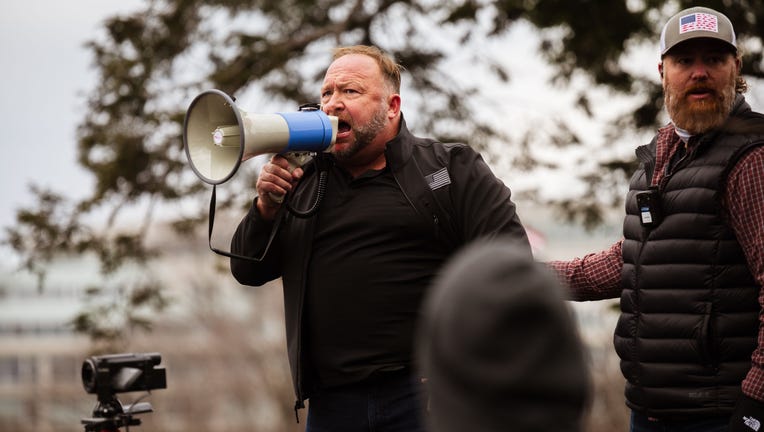 Alex Jones, the founder of right-wing media group Infowars, addresses a crowd of pro-Trump protesters after they storm the grounds of the Capitol Building on January 6, 2021 in Washington, DC. (Photo by Jon Cherry/Getty Images)

VICTORIA, Texas (AP) - Infowars has filed for Chapter 11 bankruptcy protection as the website's founder and conspiracy theorist Alex Jones faces defamation lawsuits over his comments that the Sandy Hook Elementary School shooting was a hoax.

The bankruptcy filing Sunday in Texas puts civil litigation on hold while the business reorganizes its finances. The filing came a week before a jury in Texas was set to begin considering how much money Jones, who has already lost the defamation lawsuits, should pay the families of Sandy Hook victims.

In its court filing, Infowars said it had estimated assets of $50,000 or less and estimated liabilities of $1 million to $10 million. Creditors listed in the bankruptcy filing include relatives of some of the 20 children and six educators killed in the 2012 school massacre in Connecticut.

The plaintiffs in that case have said they were subjected to harassment and death threats from Jones’ followers because he promoted the hoax conspiracy that crisis actors faked the shooting in an effort by the government to take away guns and restrict firearms.

Jones has since conceded that the shooting did happen.

"Alex Jones is just delaying the inevitable: a public trial in which he will be held accountable for his profit-driven campaign of lies against the Sandy Hook families who have brought this lawsuit," said Christopher Mattei, who represents the families in a Connecticut lawsuit against Jones.

An attorney for Jones has not returned a message seeking comment. Jones told his Infowars listeners Monday that he was "totally maxed out" and urged them to contribute money and buy nutritional supplements on his website to keep him on the air.

Last month, Jones was fined $75,000 for failing to appear for a deposition in a defamation case but a judge last week ordered the return of the money because Jones eventually showed up.

Another newly filed lawsuit accuses Jones of hiding millions of dollars in assets, but an attorney for Jones has called that allegation "ridiculous."

Neil Heslin, whose 6-year-old son, Jesse Lewis, died in the Newtown school shooting, said he did not immediately know how the bankruptcy would affect his defamation lawsuit against Jones in Texas, where a trial on how much money Jones should pay in damages is set to begin next week.

"It is what it is," Heslin said. "We’ll see where it all goes. He’s tried everything to avoid everything."

It is not the first time a bankruptcy filing has affected a lawsuit filed by the Sandy Hook families. While suing gun maker Remington, which manufactured the AR-15-style rifle used in the school shooting, the company filed for bankruptcy twice. In the second case filed in 2020, Remington’s assets were eventually sold off to other companies.

The 2020 bankruptcy delayed proceedings for a year in the Connecticut lawsuit, which sought damages against Remington for how it marketed its rifles. In February, the families of nine victims of the school shooting announced they had agreed to settle the case for $73 million.