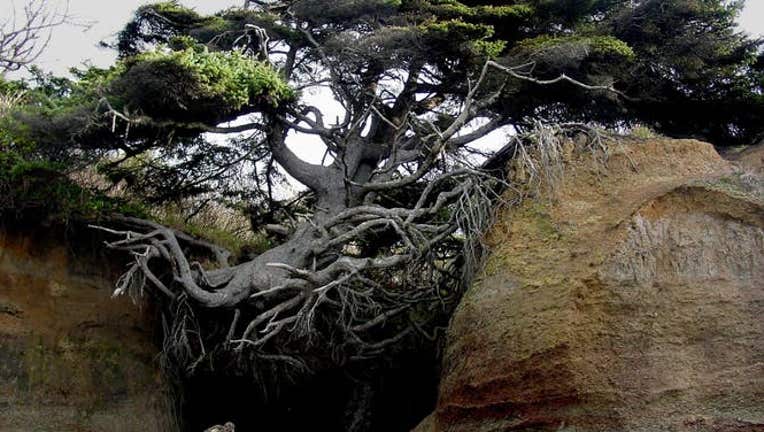 Tree of Life near Forks, Wash. in 2006 (Forks Chamber of Commerce)

FORKS, Wash. - A tree that has likely stood for dozens, if not hundreds of years along the Washington coast is clinging to survival -- quite literally -- and in the process has become a symbol of perseverance and resilience for the local residents.

The "Tree of Life," as it has recently become known, is a Sitka Spruce -- one of many that line the bluffs of the northern Washington coast. The trees can live as long as 800 years, but for several years the feeling has been that this tree's days are numbered.

High tides from the pounding ocean surf and a waterfall behind the bluff have eroded out the land beneath the tree, exposing massive roots and leaving the tree virtually suspended about 10 feet above the beach; its roots along the edge clinging to what's left of the bluff on each side for survival. 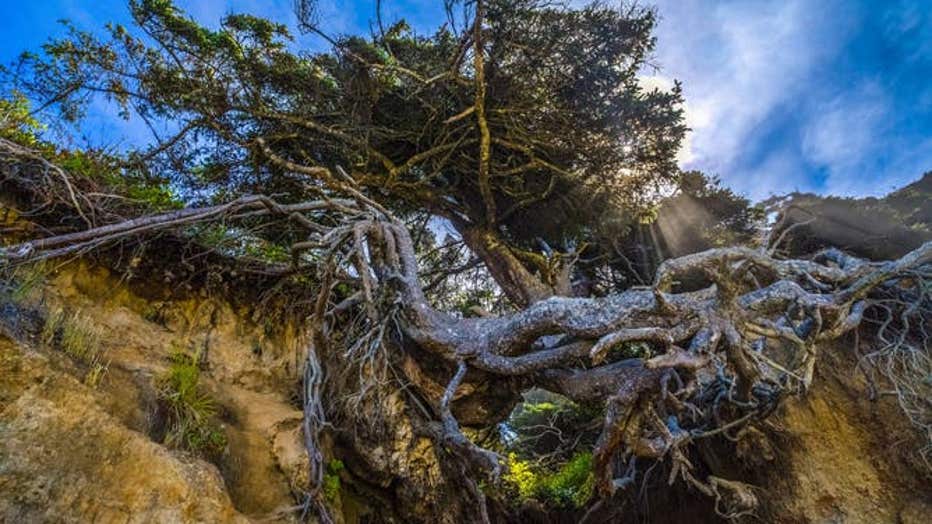 "Tree of Life" near Forks, Wash.

The tree had lived in relative solace for decades on its tenuous perch about a 45-minute drive south of Forks until a few discovered this incredible sight and started posting photos on social media.

"So it kind of became 'Instagram famous," Lissy Andros, Director of the Forks Chamber of Commerce, told FOX Weather. "And so I think once Instagram was popular and people started reposting it, it kind of took on a life of its own."

'Everything Is Undermining It'

And now people come to the beach just to gaze in wonder at how the tree manages to survive. 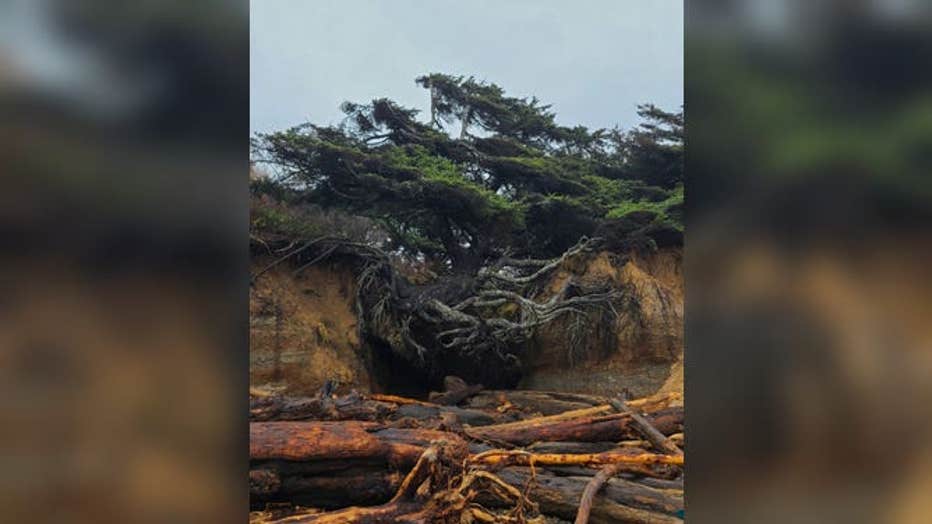 Tree of Life near Forks, Wash.

"Everything is undermining it," Andros said. "People climb on it -- that's bad for it. But the times we've had some terrible King tides that have really eroded the area around the Tree of Life. And then there's a waterfall thing behind it. So water is eroding it from the back. All the odds are against this tree, but yet it still seems to hang on day-to-day, and it's alive."

Aside from King tide, the Northern Washington coast is among the harsher climates you'll find in the United States. Fall and winter storms fueled by a supercharged jet stream crash into the bluff unabated from the Pacific Ocean. Wind gusts over 60-70 mph occur multiple times a winter. Nearby Forks receives nearly 10 feet of rain per year.

"Every storm we wonder: 'Is this going to be the storm that takes it out?' " Andros said.  But even the summers have taken their toll. A historic heat wave last June broiled the northern coast with temperatures well over 100 degrees -- a gauge just inland from Forks registered a temperature of 118 degrees on June 29.

"That heat dome damaged a lot of trees in our area," Andros said. But the Tree of Life lives on.

"Now it's the tree everybody 'roots' for," Andros said. "It's an amazing tree that's very resilient."

Andros says the tree is now a destination attraction. 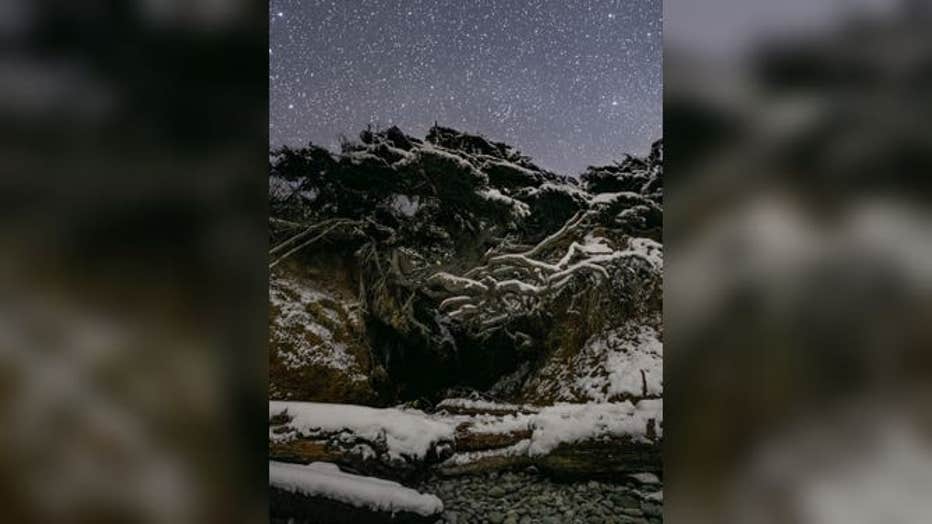 Tree of Life near Forks, Wash.

One of those people is photographer Mathew Nichols, who has spent years along the beach and visiting the Tree of Life.

"Something about its strength to hold on by just its roots despite all odds seemingly being against it, just really drew me in," Nichols said. "It is such an oddity that every visit feels like it could be the last. This is why I visit it as much as I can, it is such a beautiful landmark, I want to have memories of it in every light imaginable."

Nichols is now taking time lapse photography of the tree over the months and years to document its fight for survival and for keepsake if the tree succumbs to gravity.

Just appreciate it as long as we can

Andros says they field plenty of questions wondering why the tree has been left alone.

"We're asked: 'Why doesn't somebody go in there and help the tree? Why don't they put braces on the tree or try and fill the tree?' And I said, 'Well if those things were done, it would not really be what it is now, which is a very resilient anomaly in nature. So I think that it's exactly what it's supposed to be at this moment, and we need to appreciate it and enjoy it as long as we can."

Do others ask how the tree has managed to hold on for so long?

"I don't know how it's alive. It doesn't look like it should be alive, but it continues to be alive in this super harsh environment," Andros said.  "It is showing some differences. It is closer to the ground. So maybe, you know, the roots are getting closer to the ground, which means maybe either the ground is eroding around it and it's falling down towards the coast a little bit more because it sits up on a bluff. Other than that, it was pretty much the same." 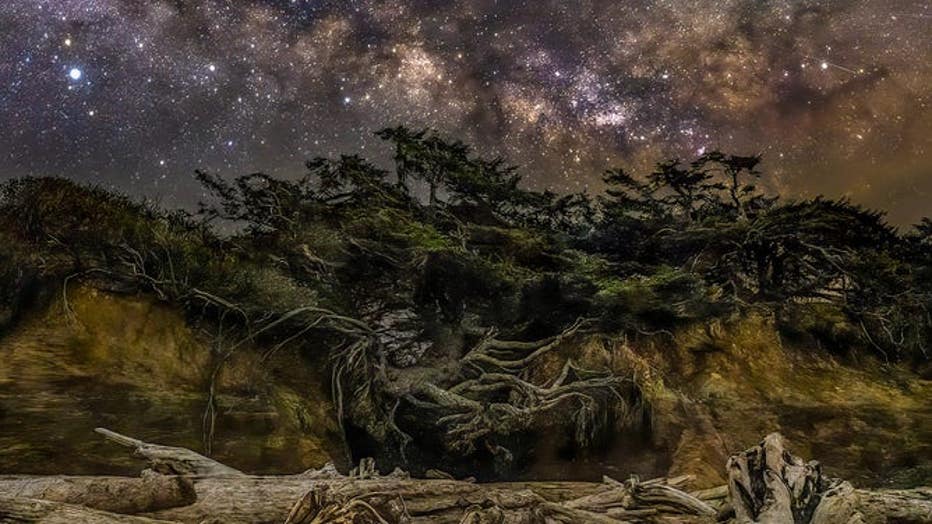 And we don't know how long it'll hang on.

"I definitely think it could be any day, in my opinion, just because of all the odds against it," she said. "But it's been like this for decades. And so, who knows? Maybe it's going to be like this for 100 more years? We really have no way of knowing. And really it's not anything that people are researching or studying. You know, it's just it's a tree. It's on the coast. We're close to it. We get to enjoy it. And that's kind of it. It's just this little lone tree that is beating the odds."

And speaking of odds, Andros marveled at our chance to witness this tree's journey.

"How lucky we are in this whole lifespan of this tree -- however old it is -- that we get to witness this part of this tree's life?" she said. "It kind of makes me teary-eyed because we just need to appreciate it as long as it's here."

Tree is easy to find

If you'd like to witness the marvel that is the Tree of Life, it's not that difficult to find -- it's even marked on Google Maps. It's a little over a three-hour drive from Seattle.

"You pull into the Kalaloch Campground parking lot and head toward the beach area -- there's like a little day-use area over there," Andros said. There are some primitive steps that will take you to the beach and then the tree is about 25 yards up the beach on the right-hand side.

"Maybe there's other 'Tree of Life' somewhere around here; maybe trees of life. And we just don't know because we can't see them," she said. "But it's just very special and unique to this area. The whole coastline has so many interesting rock formations and sea stacks and everything. It just adds to kind of the mystery of this area, for sure."