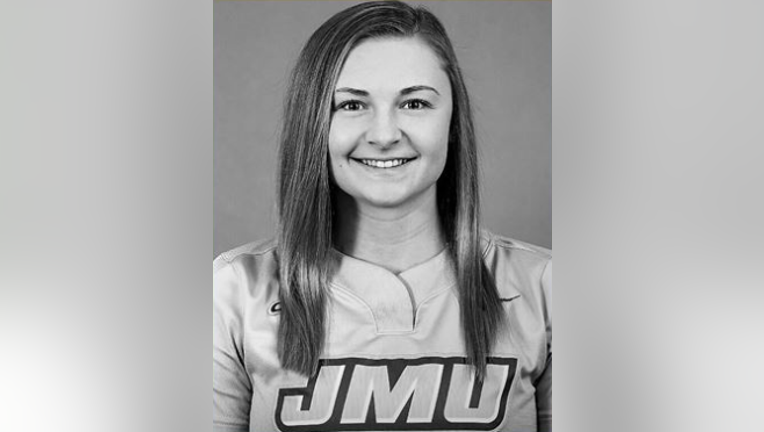 HARRISONBURG, Va. - Lauren Bernett, a star softball player at James Madison University, has died, the school announced Tuesday. She was 20.

Bernett's cause of death was not immediately released.

"College athletics is great because of the people with whom we get to interact every day. We are a tight family. We are grateful that Lauren has been part of our JMU Athletics community and will always consider her to be a Duke. We will miss her dearly," the school said in a statement.

Bernett, a sophomore catcher from Pennsylvania, was a key contributor for the college softball team last season on its way to the 2021 Women's College World Series. The Dukes won games against top-ranked and eventual champion Oklahoma and Oklahoma State before losing to the Sooners in the semifinals.

On Monday, Bernett was named Colonial Athletic Association Player of the Week as the Dukes swept a three-game set from Drexel. She hit .778 with seven RBIs in the series.

Odicci Alexander, star pitcher of JMU's Women's College World Series run in 2021, posted "Love you LB" on social media, adding, "You really never know what someone is going through."

"Our thoughts are with her family; her coaches, teammates and friends; the rest of our department staff and student-athletes; and the entire JMU community. JMU Nation is a close community, and we grieve together," the school said.

The JMU softball team also posted a tribute to the late student-athlete, tweeting "We love you, Lauren."

According to the school, the softball team's doubleheader against Longwood University scheduled for April 27, has been canceled. A new date has not yet been announced.