WASHINGTON (AP) - President Donald Trump refused to allow the coronavirus to deny him the crowd he craved for the Republican National Convention. He ordered up a scene never before seen at the White House: an American president using the South Lawn as the official backdrop for such overtly political activity. The federal guidelines about keeping distance, avoiding crowds and wearing masks to fight the spread of the virus were emphatically ignored.

Here are some key takeaways from the last night of the convention:

NO ‘SHINING CITY ON A HILL’

Trump made one thing abundantly clear in his speech accepting his party's renomination: He will try to turn political orthodoxy on its head again by trying to paint himself as an outsider even though he is the head of government.

His words were often foreboding, his new policies were few, and he gave only a vague idea of what four more years under him would bring. He used the White House as a stage in the way none of his predecessors had, and spoke of the deadly coronavirus pandemic as though his handling of it was an unqualified success.

In his 2016 convention address, Trump declared “I alone can fix it.” Four years later, after voters gave him a chance to prove it, Trump is now dealing — or his opponents would say not dealing — with multiple crises.

One thing has been clear: Trump believes the rhetoric of fear is far more powerful than words of hope. 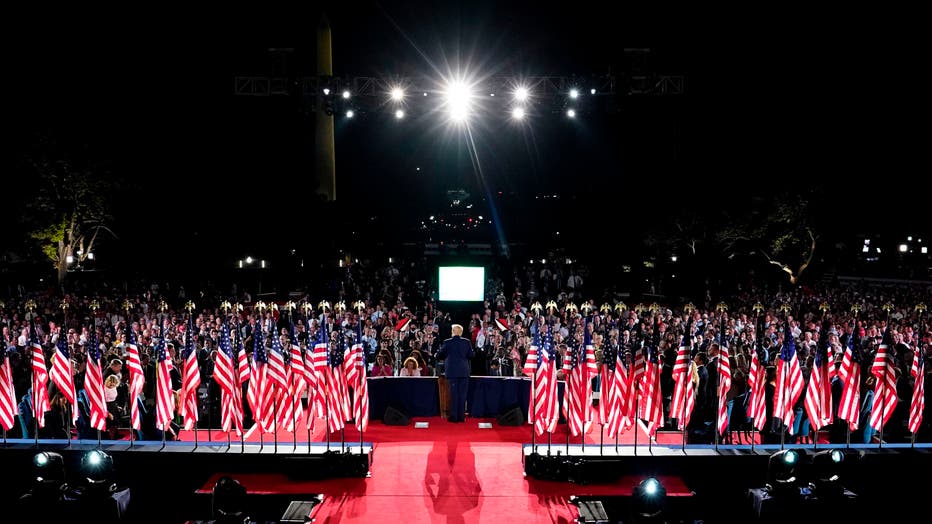 US President Donald Trump delivers his acceptance speech for the Republican Party nomination for reelection during the final day of the Republican National Convention from the South Lawn of the White House on August 27, 2020 in Washington, DC. (Photo

It all conveyed a sense of ownership and being fully in charge. But in his handling of the coronavirus and racial unrest that has touched every corner of the country he governs, he has acted more like a tenant, complaining that the landlord should come fix all the problems in the house.

His speech was replete with grave warnings, and his criticisms of Joe Biden were biting and personal. “If the left gains power, they will demolish the suburbs, confiscate your guns and appoint justices who will wipe away your Second Amendment and other Constitutional freedoms,” Trump said.

And it was Biden, he said, who had not told Americans what he would do as president. "Joe Biden may claim he is an ally of the Light, but when it comes to his agenda, Biden wants to keep you completely in the dark,” Trump said.

But he offered only a glimpse of what he hopes to do with another four years in the White House, focusing on an economic rebound from a deep, coronavirus-induced recession. “In a new term as President, we will again build the greatest economy in history — quickly returning to full employment, soaring incomes and record prosperity,” he said.

Trump's address was more than twice as long as Biden’s a week ago. And unlike nominees before him, he had inserted himself into the campaign program each of the previous three nights.

No one can say Trump is not betting on himself.

THE TRUMP SHOW MUST GO ON

Parents and children have been laid to rest without their loved ones in attendance, schools have gone to online-only learning and weddings have been indefinitely postponed to halt the spread of the coronavirus. For fear of infection, many haven’t seen their families in months.

But about 1,500 people packed tightly together Thursday night on the South Lawn of the White House so Trump could accept his party’s nomination for re-election in front of a roaring crowd.

The size of the ceremony violated the guidelines for the rest of Washington, D.C. — by a lot — and was at odds with guidance from the federal Centers for Disease Control.

The GOP and Trump’s campaign transformed the White House grounds of the South Lawn into an outdoor convention hall, complete with a grand stage, massive Trump signs, rows of white chairs and a blur of American flags, notwithstanding the federal law that prohibits the use of taxpayer resources for partisan politics.

To top it off: Masks were not required, chairs were placed close together, with no room for social distancing, and many attendees had not been tested for COVID-19.

The event could be a preview for how Trump intends to campaign in the fall.

ALL ABOUT THE BASE

Politics is supposedly about addition. For Trump, it's about zero sum.

His convention made clear that his appeal is to those who supported him before, with scant evidence of reaching beyond that base.

Trump announced his candidacy five years ago by accusing Mexico of sending rapists across the border and declaring that he alone could revive the American dream.

After nearly four years in office, Trump’s approach hasn’t changed. It’s still about the base and winning by division.

Ivanka Trump says Washington hates her father because he has called out its hypocrisy.

While many of this week’s speakers used their time to make the case for Trump’s reelection, it was clear others were addressing a different audience: an audience of one.

Again and again, convention headliners appeared to be speaking directly to Trump, showering him with flattery and affection.

His son Eric Trump went the same route earlier in the week.

“Dad, let’s make Uncle Robert proud,” he said as he wrapped up his remarks, referring to the president’s recently-deceased brother. “Let’s go get another four years. I love you very much!”

Speaking to Trump by appearing on television is a common tactic for those hoping to get on his good side or press favored policies.

A FLEETING NOD TO A VICTIM

Ben Carson, secretary of Housing and Urban Development, stood out as a speaker for one reason: He directly acknowledged the shooting of Jacob Blake in Kenosha, Wisconsin, by police Sunday.

Carson, the highest-ranking Black American serving in the Trump administration, delivered his remarks to the convention in a prerecorded video. “I’d like to say that our hearts go out to the Blake family,” Carson said. “The images everyone has seen from this tragic event in Kenosha are heart-wrenching. This action deserves a serene response, one that steers away from the destruction of a community that molded Jacob and his family into the kind of man his family and friends know today."

Carson’s comments come as the Trump convention has focused on amplifying his “law and order” message against violence and protests.

BUT THEN, THERE WAS RUDY

Rudy Giuliani, the former New York City mayor and Trump personal attorney who has gotten his client into as much trouble as he’s tried to offset, was sharply critical of the Black Lives Matter movement.

The former New York City Mayor and onetime Trump attorney spoke in support of the president.

Giuliani called the movement members “co-conspirators” in at-times violent protests sweeping the nation. “If Biden is elected, along with the Democrats who are unwilling to speak out against this anarchy, then the crime wave will intensify and spread from cities and towns to suburbs and beyond,” he added.

In a sometimes rambling address, he attacked Biden and Democrats for not doing more to stop gun violence in cities. Giuliani alleged that “Obama and Biden did nothing at all to quell the carnage,” adding, “I guess these Black lives didn’t matter to them.”

QANON ON THE WHITE HOUSE LAWN

Marjorie Taylor Greene, a Republican congressional nominee from Georgia who supports the QAnon conspiracy theory, attended Trump's acceptance speech as an invited guest. Greene posted a photo of herself on the South Lawn Thursday evening hours ahead of of Trump’s remarks.

Greene has a long history of bolstering the baseless pro-Trump theory, which centers on an alleged anonymous, high-ranking government official known as “Q” who shares information about an anti-Trump “deep state” often tied to satanism and child sex trafficking. She has also made a series of racist, anti-Semitic and Islamophobic comments.

Trump has praised her as a “future Republican Star.” Greene’s presence comes after the Trump campaign was forced to pull at the last minute a prerecorded speech by “Angel Mom” Mary Ann Mendoza from Tuesday night’s program after she fired off a now-deleted tweet directing her followers to a series of anti-Semitic, conspiratorial messages.