Six people were on board of the Special Enforcement Bureau helicopter at the time of the crash, including five deputies and one ride-along doctor from UCLA, Sheriff Alex Villanueva said during the press conference.

LOS ANGELES - A Los Angeles County Sheriff’s helicopter that was attempting to land crashed Saturday evening near the San Gabriel Dam while responding to a rollover crash, authorities said.

Six people were on board the Special Enforcement Bureau helicopter at the time of the crash, including five deputies and one ride-along doctor from UCLA, Sheriff Alex Villanueva said during a press conference.

The helicopter landed a few feet from a 200-foot drop, which Villanueva described as "nothing short of a miracle."

All the patients on the aircraft were transported to a trauma center. One person was in critical condition, two in moderate and the remaining patients suffered minor injuries. On Sunday, three people remain hospitalized.

Sheriff Villanueva said that none of the injuries were life-threatening, stating that there were "some fractures and broken ribs."

During a Saturday night press conference, an official from Pomona Valley Hospital Medical Center said that all the patients were currently in stable condition.

The crash was reported in the area of Highway 39 and East Fork Road around 4:30 p.m. Air Rescue 5 was on its way to a call for service when it crashed, according to Deputy Alejandra Parra of the Sheriff's Information Bureau. 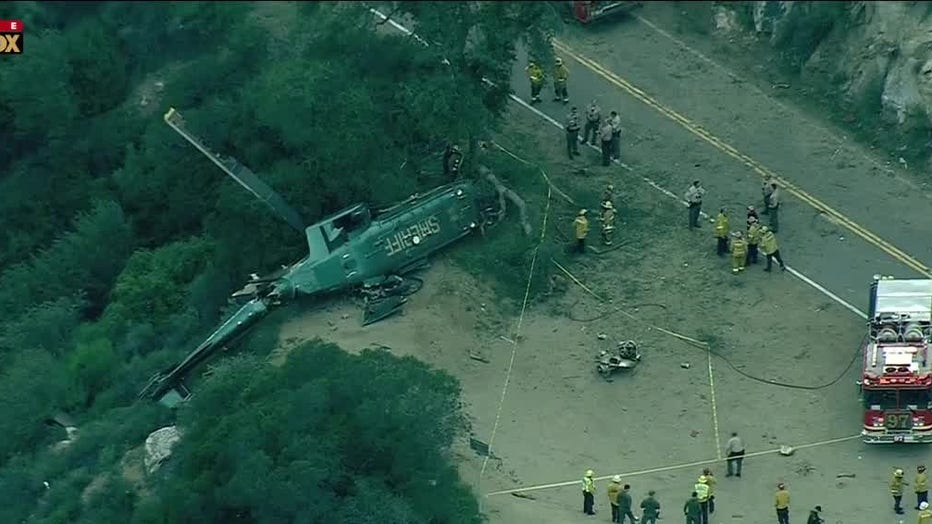 Cloudy weather in the area was not believed to be a factor in the crash.

The official cause of the crash remains under investigation.

Just last month, a Huntington Beach Police helicopter crashed into the water in Newport Beach Harbor while responding to a call for service. A 14-year veteran of the department died in the crash, and another officer on board at the time of the crash was injured.