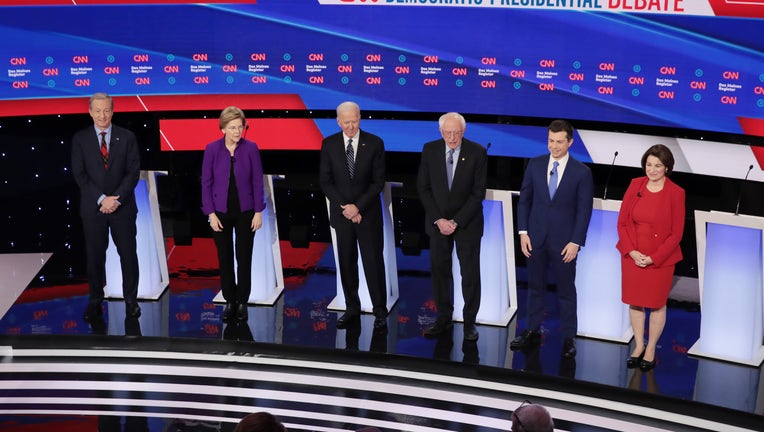 DES MOINES, Iowa -
Six Democratic presidential candidates have wrapped up their final debate before primary voting begins with talk of hope, defeating President Donald Trump and bringing a divided nation back together.

Former Vice President Joe Biden said Tuesday that "character is on the ballot" in the 2020 election and that eight years of Trump in office would be "an absolute disaster."

Sen. Bernie Sanders said "this is the moment when we have got to think big, not small," and have courage to take on the "1%," while Sen. Elizabeth Warren said she has hope in America's future despite its challenges and looks forward to becoming the first female president.

Sen. Amy Klobuchar says she'll be a president who finds "common ground instead of scorched earth" to get things done, while former Mayor Pete Buttigieg says Democrats will get one shot to win big and "send Trumpism into the dustbin of history."

Businessman Tom Steyer says he thinks of the American people as his teammates, and pledged he won't permit "someone to run down the field and kick my teammate in the face."

Meanwhile, former South Bend, Indiana Mayor Pete Buttigieg says he will keep up his effort to appeal to black voters, whose support will be vital to winning his party's nomination. Buttigieg

Buttigieg said during the debate that "the black voters who know me best are supporting me," referencing local leaders in his hometown of South Bend, Indiana.

Buttigieg has built up support in some of the early states but has struggled in South Carolina, where black voters comprise the majority of the Democratic primary electorate. It's the first state where candidates' mettle with black voters is tested.

Buttigieg pointed Tuesday to his endorsement from U.S. Rep. Anthony Brown of Maryland, who earlier this month became the first member of the Congressional Black Caucus to back Buttigieg's campaign.

During the debate, the candidates touched on a number of issues, including President Trump.

Sen. Klobuchar said the upcoming Senate trial on President Donald Trump's impeachment "is a decency check on our government."

"This is a patriotism check," she added, noting the upcoming 2020 election is yet another check. She also criticized her Senate Republican colleagues over reluctance to allow certain witnesses for the Senate trial, saying, "We've asked for only four people."

"And if our Republican colleagues won't allow those witnesses, they may as well give the president a crown and a scepter. They may as well make him king," Klobuchar said.

Biden, meanwhile, said the outcome of a Senate impeachment trial against Trump won't affect his arguments against the Republican president in the 2020 campaign.

The former Vice President said it's "irrelevant" whether Trump claims exoneration if the Republican-led Senate votes as expected and doesn't remove him from office. Biden also said House Democrats had "no choice" but to impeach the president for Trump's efforts to pressure Ukrainian officials to launch investigations into Biden's son Hunter's business dealings in the country and his own foreign policy engagement in Ukraine when he was vice president.

Trump's claims about the Bidens have been debunked. But Biden said he expects Trump and Republicans to continue to allege that the Bidens are corrupt.

"I did my job," Biden said at the debate.

The candidates also touched on healthcare.

Biden suggested that Sanders wasn't being "candid" with voters over the cost of his single-payer insurance idea. Klobuchar said "Medicare for All" is so impractical that the "debate isn't real", and Buttigieg bristled at the suggestion that adding a "public option" plan to the existing market isn't a major step forward.

Warren tried a bit of a twist. She defended single payer, but noted that Republicans want to roll back even existing coverage. "I'll take our side of the argument any day," she said of the entire Democratic field.